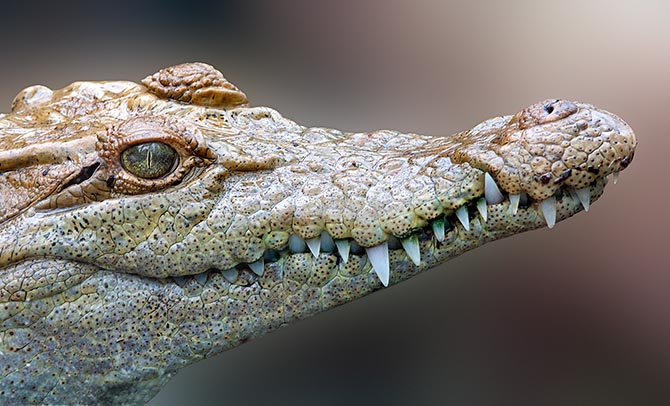 At serious extinction risk, the Philippine crocodile (Crocodylus mindorensis Schmidt, 1935) is a loricate afferent to the order of the Crocodylia, to the family Crocodylidae, to the subfamily of  Crocodylinae and to the genus Crocodylus.

The term “crocodylus” has been already defined by us several times, in various texts of other specimens of loricates, word coming from the ancient Greek and meaning worm-shaped pebble, whilst the lemma “mindorensis” means in Latin “of Mindoro”, an island of the Philippines archipelago.

The common names under which this crocodile is locally called in English are Philippine crocodile, Philippine freshwater crocodile and Mindoro crocodile.

The CITES places it into the appendix I, whilst the IUCN for this species estimate a status of “critically endangered”, that is CR A1, C2a. Biologists estimate a population of less than 200 specimens.

The reasons which have determined such a low density of population lead to its low geographic distribution, a management incapacity of the populations and to the poor capacity this crocodile has in adapting to the smallest environmental modifications. 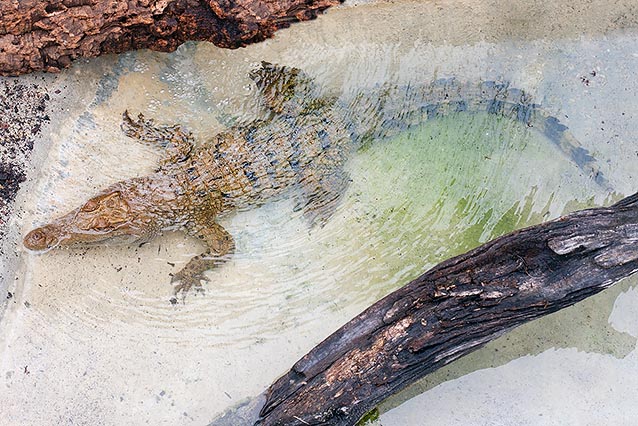 In 1975, an expedition of Swedish biologists discovered a crocodile whose geographic distribution was limited to Borneo. They called it Crocodylus raninus, this loricate resembles morphologically to the Crocodylus mindorensis. But the morphological, ecological and genetic proofs are not sufficient for declaring this animal neither as a distinct race, that is Crocodylus raninus, nor as subspecies or race of the Crocodylus mindorensis.  Whereas in 1992, American herpetological biologists, by means of genetic analysis, have suggested that the Crodoylus raninus might be a subspecies or race of the Crocodylus porosus, loricate with a vast geographic distribution.

The species is endemic to the Philippines archipelago: islands of Jolo, Masbate, Mindanao, Busuanga, Negros, and Mindoro. 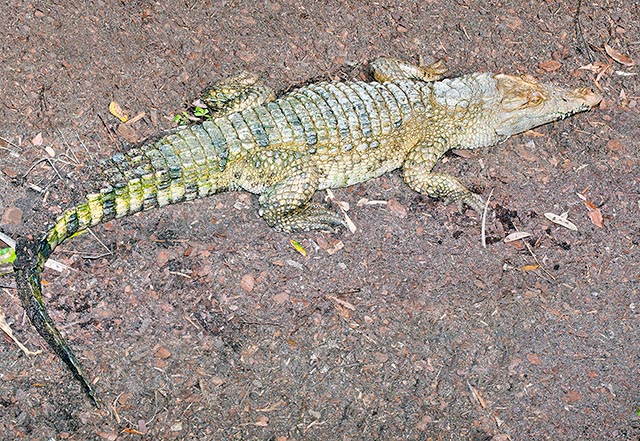 It does not exceed the 3 m of length, with a strong armour on the back © Giuseppe Mazza

Actually, this is more an historical geographic distribution, that is when the species was not endangered as is the case today. Presently, its distribution is uncertain and needs a new census; for instance, Filipino, and not, biologists hypothesize that it has disappeared from some areas, such as the islands of Luzon, Jolo, Samar and Masbate.

Its habitat is mainly restricted to the freshwater areas either lentic or lotic, such as small lakes, pools of water, freshwater swamps and tributary fluvial branches. It mainly nourishes of aquatic invertebrates and small vertebrates.

Although in the past the ecological series was present in almost all the 7.107 islands of the Filipino archipelago, nowadays the reality is much deceiving. Furthermore, very little is known about the ecology and the natural history of this species and of its interaction with the Saltwater crocodile (Crocodylus porosus), which, however, is a thing to be studied more deeply. On the other hand, the Filipino government spends very little in economical terms as well as in legislative ones for protecting and conserving this species, and consequently the local biologists often have their hands bound with regard to the poachers.

Protected areas in favour of this splendid crocodile have not yet been created, and it sees day by day losing most of the biotopes where it lives in favour of agriculture; the countrymen themselves kill this loricate because, after them, it should damage their crops. 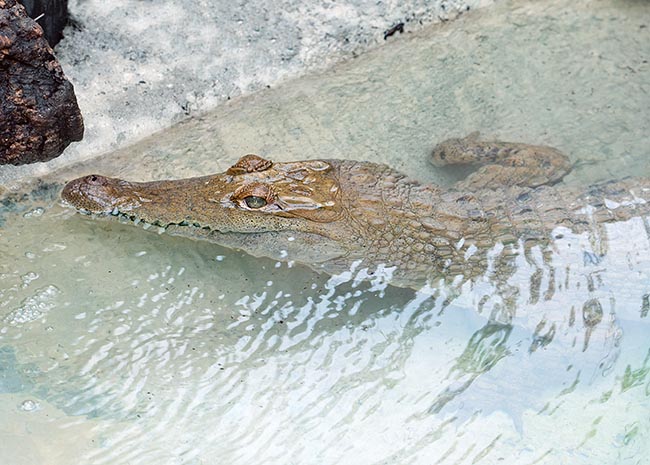 In the last years, various groups of Filipino and American biologists are trying with the procreation in captivity as well as with the natural coupling, and also by means of the artificial insemination, to increase the scarce population, an example are the projects activated at the Silliman University, the oldest American university institution, founded in the city of Dumaguete in the province of Negros Oriental.

The Crocodylus mindorensis is a fairly small species. In the wild, the males never exceed the 3,0 m of length, the females are little smaller. It has a fairly broad muzzle for the genus Crocodylus and very strong armour on the back. Its morphology reminds that of the Crocodylus novaeguineae, of which, as said before, it was considered as a subspecies or race till the eighties of the past century. Several species of Asian crocodiles such as the Crocodylus mindorensis, the Crocodylus novaeguineae, the Crocodylus porosus and the Crocodylus siamensis independently from their size, have often a similar morphology which renders them difficult to distinguish, and this has led several zoological biologists to hypothesize their descending from a common progenitor. The young of the saltwater crocodile have a livery coloured in tobacco brown, which turns to dark grey-green when adults. Furthermore, in the young, the neck is more variable for the disposition, for the number and in the dimensions of the post-occipital and nuchal scales, which then continue with the dorsal ones. 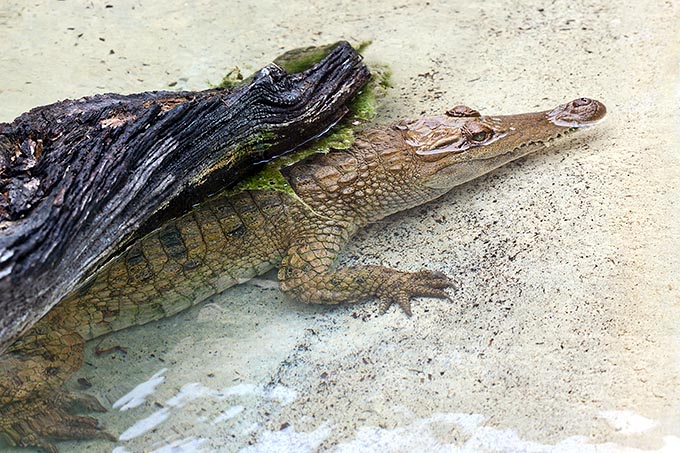 These variations are present also among various adult individuals. For this reason, the classification or the identification by means of analysis and counting of the scales, leads often to mistakes.

The incubation time is of about 85 days.

This is one of the few species of crocodiles where the female shows phenomena of homo-parental cares also during the incubation of eggs.