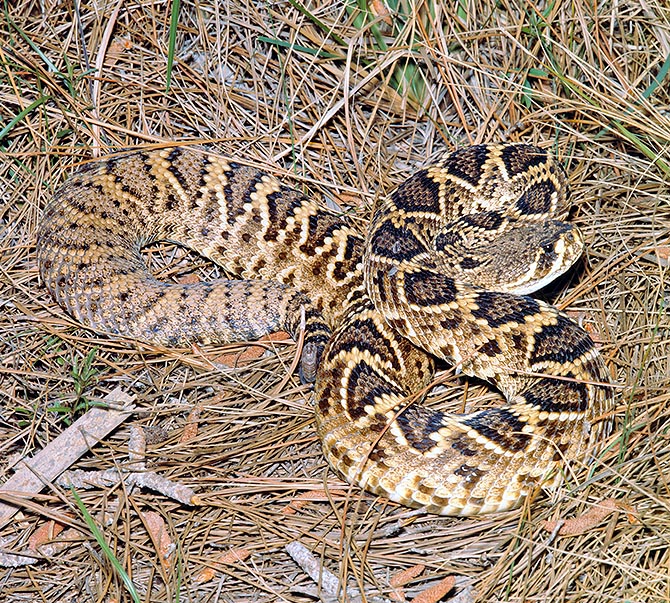 Crotalus adamanteus may be more than 2 m long, with 3 cm fangs © Giuseppe Mazza

The elegant Eastern diamondback rattlesnake, or Eastern diamondback (Crotalus adamanteus Palisot de Beauvois, 1799) is one of most known, famous and ill-famed rattlesnakes of the New World, and by sure one of the largest crotalids, nowadays ascribed to the family of the Viperids (Viperidae), subfamily Crotalines (Crotalinae), but once considered as a separate group.

Like all most evolved viperids among the venomous snakes, it has long poison fangs which may fold on the palate and placed in the fore part of the palate itself (solenoglyphs), which is why, seen the huge dimensions, which, as an average, vary from 90 to 190 cm (record: 243 cm), the “venom teeth”, hollow like injection needles, may be up to 3 cm long and capable to inject huge quantities of poison in depth, even through light clothes.

We have to add to this also an irritable temper and a remarkable tendency to bite at the least provocation and then we shall get one of the largest poisoners of North America and, especially, a poisoner capable to cause the death of humans.

As the name implies, the livery is characterized by dorsal patterns having the shape of a diamond or of a lozenge, of dark colour (black or brown), framed by a thin line of pale scales, usually of cream colour. This pattern stands out on the background colour of the body, which may be beige, reddish, light brown or yellowish.

The head is large and wide, flattened, well distinct from the neck, and, on the upper side, it shows a mix of big and small scales, likely the other Crotalus but, unlike the Pigmy rattlesnakes and the Massasaugas (Sistrurus), whose head is covered by big scales.

The eye, placed well ahead, has vertical pupil, and the thermoreceptor dimples are evident; these allow the localization of the waem-blooded prey even in the darkness or when it is still: and for this reason the crotalids are called pit vipers.

The “rattle”, which has given its quaint name to the whole group, often inappropriately, because there are crotalids not having this …appendage, is a sound organ formed by segments of corneal tissue, ringed like pearls of a necklace, in a relatively slack way, so much that they can collide against each other when the tail vibrates quickly.

The sound produced varies depending on the size, and, of course, the bigger the serpent is, more audible the noise will be, even from far away. In the smallest species, it can recall the buzzing of a bee, but in a big diamondback it seems more the noise of a huge locust or, better, that gratifying machine-gun fire we did love so much when boys (at least to those who were such when I was the same), obtained by fixing a playing card to the fork of the bicycle in such a way that the passage of the rays made it vibrate. 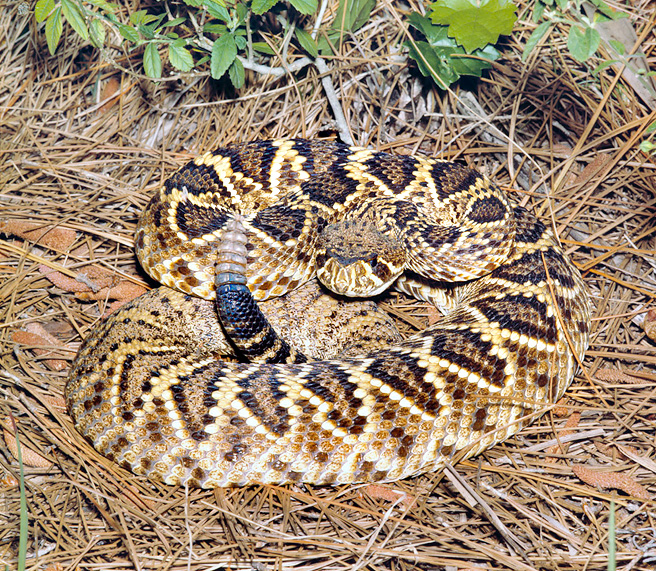 In some instances, then, the noise has been compared to that of a steam leak or to other sounds, so much that the descriptions and the comparisons made by the one who had met one of them are quite different and are connected not only to the size of the described individual but also to the fantasy of the man.

In the very young specimens the rattle is just a hint, which looks like a knot or a button, but then, time passing, from 2 to 4 segments per year do add, when the “moults” do happen. The oldest segments can become frail and get off.

The home range of this serpent includes the south-eastern USA, Florida included, Louisiana, South Carolina, the Mississippi basin, and the eastern diamondback is at ease in a remarkable variety of habitats, from the conifer woods to those formed by various varieties of palms, from the swampy or marshy zones to the semi-arid ones.

Good swimmer, it even goes into the sea, reaching and colonizing islets off the Florida coast (Florida Keys), and the preys it eats go from the rodents to the birds, from other reptilians to the batrachians.

It is an animal tending to deal with a supposed threaten instead of going away, and, in fact, the sight of this big serpent, rolled up in a nice coil of spires, the head lifted and retracted, ready to spring forward and the tail lifted as wall and quickly moving in way to produce the famous warning rattling, is a view difficult to forget.

The venom, even if less powerful than that of other species, is produced and injected in huge quantities, and for this a possible bite (but the cases of dry bite, when the serpent doesn’t inject) is a dramatic occurrence, especially if happening in isolated zones and far away from an inhabited settlement.

The venom, which is just modified saliva, has several actions, among which prevails the cytotoxic one, with destruction of the tissues, necrosis and gangrenes. The oedema (extravasation of plasma from the capillaries into the tissues) is often important, and besides inducing a deficit of blood supply, due to a compressive mechanism inside the muscle fibres, with possible gangrenes, may cause a hypovolemic shock.

The action on the blood vessels and on the coagulation can cause haemorrhages and thrombosis and the reabsorption of toxic substances from the necrotic zones can, in some cases, cause harm and renal failure.

Huge quantities of antivenom are necessary in the cases of serious poisoning, and any delay can leave, however, damages and permanent sequelae, even if the serum has saved the patient’s life.