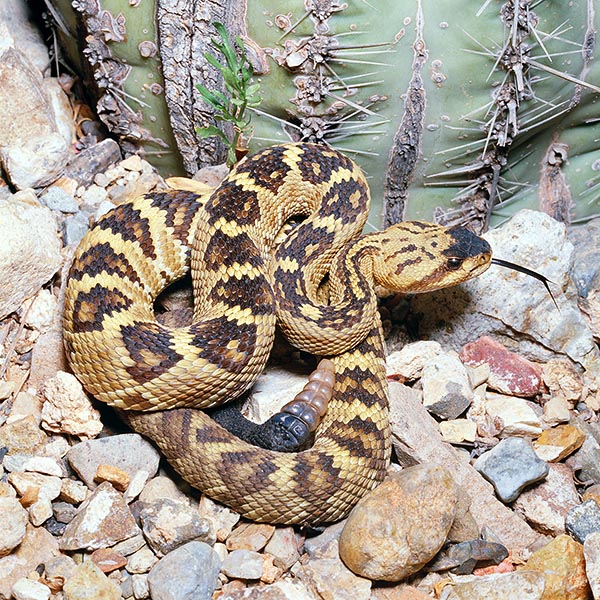 The Black-tailed rattlesnake, Green rattler or Black rattler (Crotalus molossus Baird & Girard, 1853), belongs to the family of the Viperids (Viperidae) and to the subfamily of the Crotalines (Crotalinae), characterized by the presence of dimples for detecting the vicinity of warm-blooded animals.

It is a medium-sized serpent, usually measuring 70-100 cm, with records of 120 cm. The head is flattened and triangular, with eye having elliptic and vertical pupil, placed fairly forward, not far from the heat-sensing dimples and protected, above, by a supra-ocular scale rather protruding, like a roof, possibly deputed to shelter the eye from the perpendicular sun rays.

The apex of the snout is fairly raised, we might say “dog-like” , and the mouthline which, on the front, raises quite markedly, may, indeed, vaguely remind the snout of a boxer. The fangs, foldable on the palate, as it is a viperid and therefore with poison apparatus of solenoglyphous type, are relatively long, 1,5 cm as an average, but can reach the 2 cm in the bigger specimens.

The colour is quite variable, including a variety of background tints going from black (whence the common name of black rattler) to brown, to yellow or to intense green (phase which has given it another name, green rattlesnake, that, however, must not induce to mistake, by creating confusion with the Crotalus viridis). In almost all the specimens, the tail, very dark, tends to create a chromatic contrast with the rest of the livery, and the name of black-tailed rattlesnake is obviously due to such characteristic. In the markedly green individuals, the dark patterns, of polygonal shape, present on the back, render the livery extremely elegant and enticing. These patterns are often “full” in the fore part of the body, whilst, on the rear, they include a green spot inside. On the head is evident a V-shaped pattern with front vertex and placed on the apex of the snout, whose “arms” proceed to include the eyes. Practically constant characteristic is, finally, the tail, completely black and ornamented by that apparatus delegated to threatening which is the famous “rattle”.

This … musical instrument is formed essential by keratin, and, by each moult (phenomenon which may take place several times per year), a ringed segment is added but, contrary to what one might think, it is not possible to rely on the number of rings of the rattle for determining the age of the specimen, because there are more than one moults per year as well as for the reason that such rings, which become gradually frailer, with the time, are easily lost … In other words, it is not possible to determine the age of the ballerina from the castanets she uses. The sound, when the serpent, upset or worried, vibrates quickly the tail, is sharper than that produced by bigger species, such as the diamondbacks, and resembles the buzzing of furious bees.

Although not standing among the most aggressive rattlesnakes, it is a nervous and bad-tempered species and does not hesitate to bite if touched or disturbed. Owing to the size, it can hit more than half a metre away and the fangs have a sufficient length for penetrating light fabrics. The venom has a complex composition, containing, among the other substances, proteinases, fibrinogen-coagulases, collagenases, and haemorrhaging factors, and the amounts it can inoculate can kill and adult man, if an early intervention does not take place. 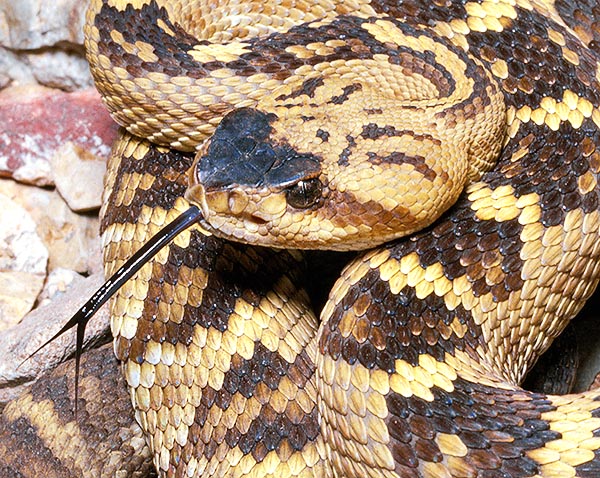 The effects found in some cases of poisoning (I utilize such term because, as is the case of almost all the venomous serpents, there may often occur cases of dry bite, that is without inoculation of venom), were oedema, due to exudation of plasma from the blood vessels, ecchymoses due to leakage of whole blood, necrosis, accompanied by extremely violent pain, discolouration of the affected limb and haemorrhages, also at the expenses of internal organs. Contrary to what happens in case of bite of other viperids, the thrombotic phenomena, due to the increased coagulation of the blood, are, conversely, less marked.

This rattlesnake hunts prevailingly rodents and small mammals but the juveniles may at times content of insects and of lizards. Also nestlings and other animals may, however, become part of its diet.

Like many rattlesnakes, it has mainly nocturnal habits, apart in the cooler periods, whereby it tends to be diurnal or crepuscular in spring, whilst in summer it is essentially nocturnal. In winter, unless the climate is particularly mild, it hibernates, using natural cavities or, more frequently, dens of rodents or of other animals. Even if it loves sub-desertic zones and grasslands, it may be found in various habitats. On the sand, it can, at times, adopt the side-winding movement, like the horned vipers and the sidewinders, and, even if not being an aquatic animal, it is a very good swimmer. The female is ovoviparous and generates alive and formed newborns, already endowed of active venom. The couplings occur at the beginning of spring and the births by early summer. The “brought forth” young are, as an average, 5 to 15.

At least four subspecies of this serpent are recognized:

Crotalus molossus nigrescens or Mexican black-tailed rattlesnake is rightly diffused n Mexico, especially in the Sonora and the Chihuahua.

Crotalus molossus oaxacus or Oaxacan black-tailed rattlesnake typical of the Mexican area of the same name and has a more limited diffusion than nigrescens.

Crotalus molossus estebanensis or San Esteban Island black-tailed rattlesnake is confined in the island having that same name in the Gulf of California (Mexico).