The species is native to Costa Rica (Puntarenas and San José) and Panama (Chiriquí) where it grows in the underwood of the pluvial forests from the sea level up to about 500 m of altitude.

The name of the genus is the combination of the Greek substantive “κρύος” (cryos) =  frost, cold and “φίλος” (philos) = friend, possibly with reference to the type species, the Cryosophila nana (Kunth) Blume ex Salomon (1887), living in Mexico up to about 1700 m of altitude; the name of the species is the local one most frequently utilized. 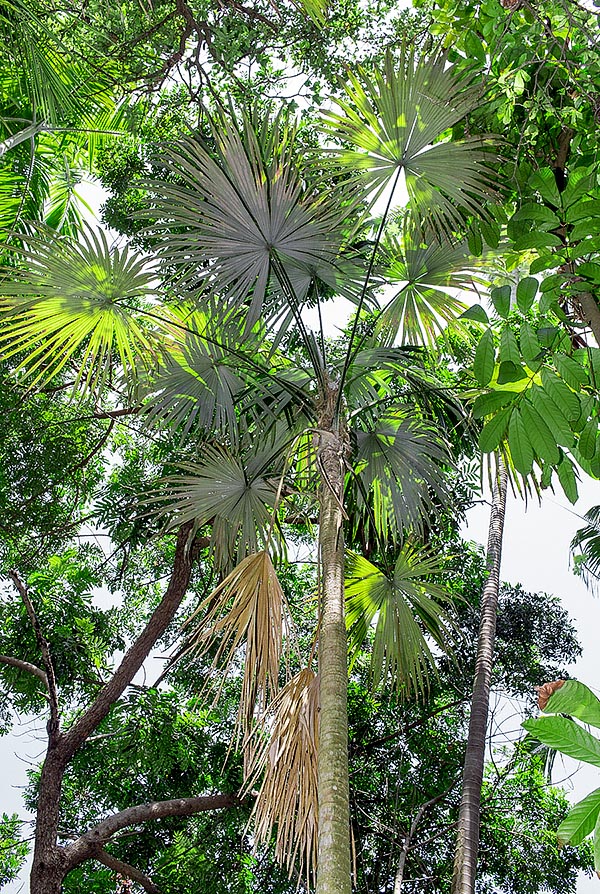 The Cryosophila guagara P.H.Allen (1953) is a monoecious species with solitary stem, rarely cespitose, erect, up to about 10 m tall and of 7-13 cm of diameter, greyish brown, covered  by spiny adventitious roots, 6-10 cm long, bent downwards, that at the base root forming a sort of a supporting cone.

The leaves, on an unarmed petiole up to 1,8 m long, are costapalmate, almost circular, of about 1,6 m of diameter, deeply divided in cuneiform segments, in their turn incised in less deep segments, in variable number, linear-triangular, with acuminate apex, of dark green colour above, silvery white below.

Ramified inflorescences between the leaves (interfoliar), 0,6-1 m long, drooping, with ramifications usually of second order, with the primaries enclosed each one by a semi-deciduous straw-yellow bract. Hermaphroditic protogynous flowers (the female part of the flower ripens before the male one, this avoids the self-pollination) spirally arranged in close contact, subsessile, globose, of 3-4 mm of diameter, of white colour. The fruits are globose, of 1,6-2 cm of diameter, white, waxy, containing one almost spherical seed.

It propagates by seed, previously kept in water for two days, placed in draining and aerated loam maintained humid at the temperature of 24-28 °C, with germination times starting from 3 months.

Little known species outside the origin zones in spite of the undoubtful ornamental characteristics due to the spiny thin stems and the neat contrast between the upper page of the leaf of dark green colour and the lower one, silvery white. Cultivable in the tropical and subtropical climate regions in partially shaded position, in particular during the juvenile growth phase, and well draining soils, rich of organic substance and maintained constantly humid, even if, when adult, can bear short dry periods.

The leaves are employed as cover of rural dwellings and for fabricating brooms and other handicrafts, the growing buds (“hearts of palm”) are locally consumed, use that involves the death of the plant, as well as that of the inflorescences; the fruits are utilized in the animal feeding.