The species, native to central-western Honduras, is nowadays present, with a limited number of individuals, in the underwood of the residues of the pluvial forest on the calcaerous slopes of the western shore of the lake between the 600 and the 700 m of altitude.

The name of the genus is the combination of the Greek substanctive “κρύος” (cryos) = frost, cold and “φίλος” = friend, perhaps with referenve to the type species, the Cryosophila nana (Kunth) Blume ex Salomon (1887), living in  Mexico up to about 1700 m of altitude; the species is honoured to the American botanist Louis O. Williams (1908-1991), schola of the flora of Central America. 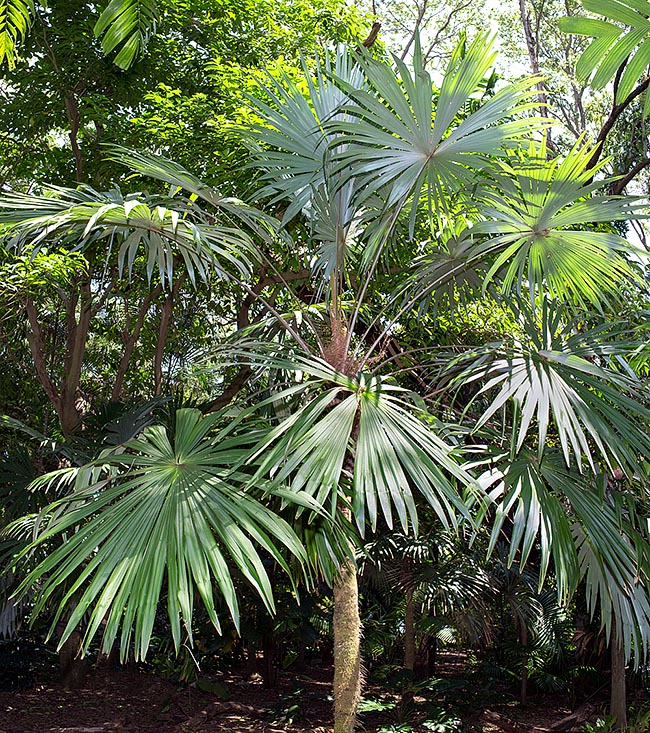 The Cryosophila williamsii P. H. Allen (1953) is a monoecious species with solitary stem, erect or curved, up to about 7 m tall and of 7-10 cm of diameter, of  brown-greyish colour and covered by adventitious ramified spiny roots, bent downwards, whitish, that root at the base forming a sort of support cone.  The leaves, on a long unamred petiole, are costapalmate, almost circular, of 1,5  m of diameter,  deeply divided in about two halves, in turn incised less deeply in about 50 linear-triangular segments with bifid apex united in groups of 3-6, dark green above, silvery white below.

The fruits are globose-ellipsoidal, of 1,3-1,6 cm of diameter, of cream white colour, containing only one irregularly shaped seed.

The environment suitable for this rare species is the shady and humid one of the tropical and subtropical regions, on preferably calvareous soils, draining, rich of organic substance.

The leaves have been extensively utilized in the past as cover of rural dwellings, whilst the vegetative apices (hearts of palm) are sitll locally consumed as remedy for various intestinal disorders, use that causes the death of the plant. The increasing anthropization, the expansion of the agriculture and the above mentioned use have drastically decreased its population during the last years, reduced (1998) to two distant subpopulations and with limited number of individuals, it has been therefore consideres as “regionally extinct” by the IUCN (International Union for Conservation of Natue), that has placed it in thr Red List as “Extinct in the Wild” (EW), even if are necessary some furher investigation.

In order to safeguard the species, in 1994 an expedition of the Fairchild Tropical Botanic Garden has harvested seeds in the same location of the type species, the first blooming of the obtained plants has occurred in 2005.