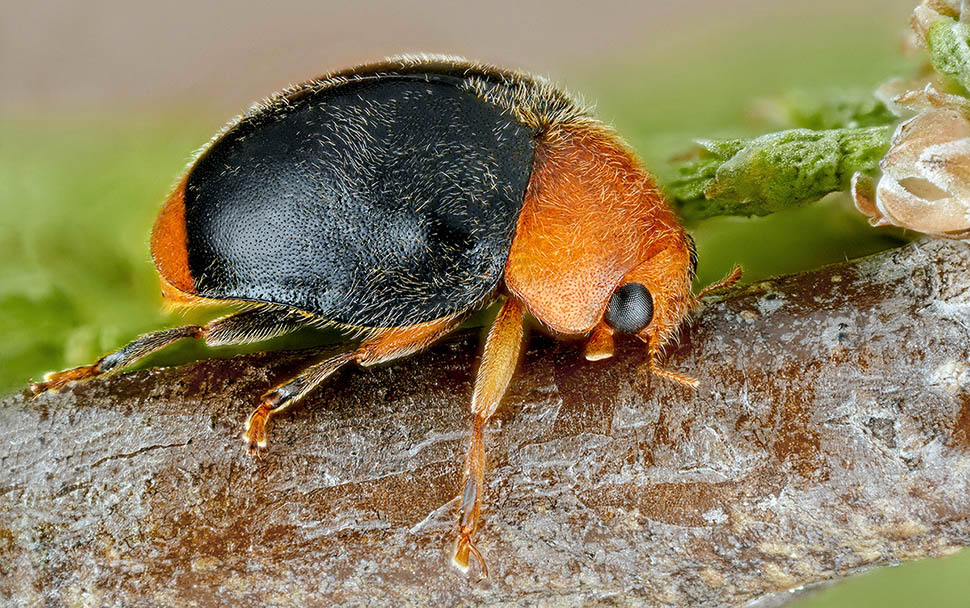 Cryptolaemus montrouzieri is a coleopter relative to ladybirds, long just a little more than half centimetre. Native to Australia, New Zealand and Indonesia is used in the biological fight to cochineals infesting citruses. The globular shape of the body doesn’t give support to the ants that defend them to suck honeydew © Gilles San Martin

The Mealybug ladybird (Cryptolaemus montrouzieri Mulsant, 1850) is a coleopteran Coccinellidae of the tribe of the Scymninae or Coccinellini, in which are included predatory species of cochineals and of aphids.

The larvae are characterized by the presence on the back of white waxy filaments, useful for defending from the ants that protect the species producing honeydew preyed on by the Scimnini.

The name of the genus Cryptolaemus, coming from the Greek, is composed by “crypt”, hidden, and by “laemus” derived from “laimos”, neck or throat, and therefore, literally, with “hidden neck”. 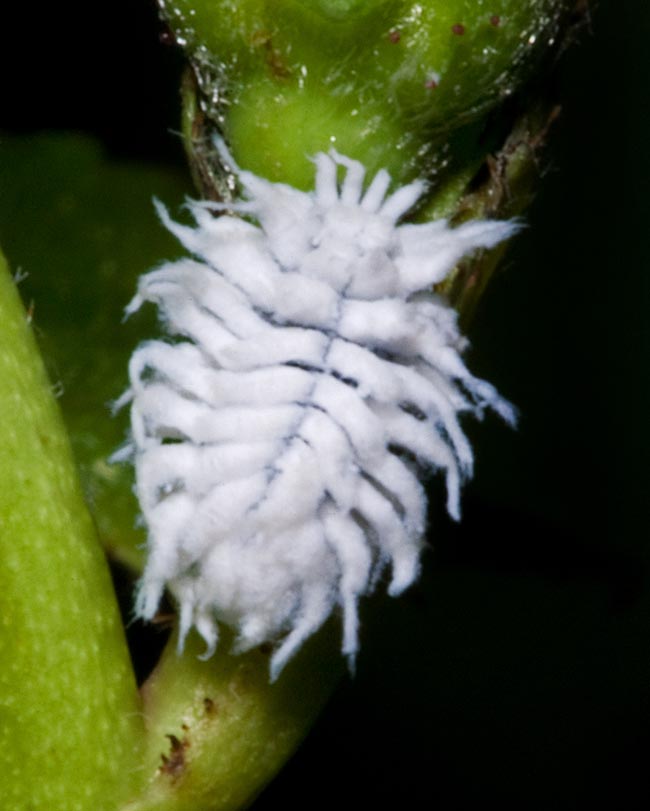 The larva, greedier than adults, reaches two centimetres. It defends from ants’ attacks camouflaging between the floury cochineals thanks to the long white flakes of the back that render it definitely similar to its preys © G. Mazza

The Mealybug ladybird, who together with other six congener species is native to Australia, New Zealand and Indonesia, was discovered in 1888 in Queensland and in New South Wales by Albert Koebele.

He, as entomologist of the USA government, had been sent to Australia, by Riley, to look for effective natural enemies of the Australian cochineal Icerya purchasi, dangerous for the Californian and Argentinian citrus groves.

During the same mission Koebele identified and introduced in California, besides the Mealybug ladybird, other species predatory of cochineals.

In 1916 in many citrus groves of South California occurred serious infestations caused by Pseudococcus calceolarie.

By that time it was noted that the Mealybug ladybird was able to effectively counter the infestations in the zones where it had been able to overcome the winter period, even predating alternative hosts.

Considered the predatory efficiency and the reduced capacity of acclimatization, the coccinellid was introduced, bred and spread for the biological struggle to the Pseudococcids (Pseudococcidae), known also as Mealy cochineals or Cotton cochineals, in the main areas of the world where were cultivated the citrus fruits.

The Mealybug ladybird is also utilized against the cochineals of the araucarias, of the coffee and of the vine. In protected environments and in the parks it has been introduced also against the aphids.

Presently, in the Mediterranean Basin, it is present in citrus groves, vineyards and greenhouses of North Africa, South Europe, France, Spain, Turkey, Greece and Italy. 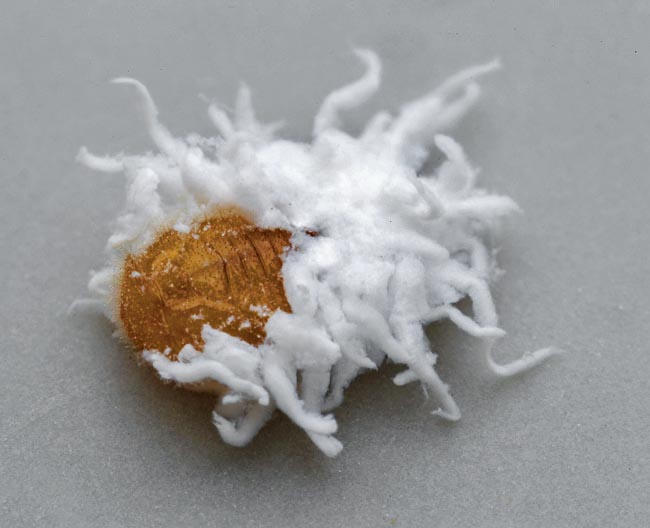 Only in some environments the microclimatic conditions have allowed the acclimatization of the Mealybug ladybird: therefore, in those where it fails in overcoming the winter, it is released in late spring-summer when are found the first colonies of the cochineal.

Cryptolaemus montrouzieri has been able to become acclimatized only in some coastal areas of California and consequently, for the biological struggle in the citrus groves of the hinterland, from 1916 to 1930, has been bred in 16 industrial insectaria, specially constructed, one of which was able to produce 30 to 40 million of specimens each year.

In Italy, the Mealybug ladybird was introduced from the Hawaii Islands and from California by Filippo Silvestri, in 1908.

Other drops have been done in 1935 in Calabria and in 1938 in Liguria with specimens coming from the French Riviera.

Starting from the seventies of the last century, it has been bred in the laboratories of the Universities of Naples, Portici, of Palermo, and of Catania. An insectarium built in Sicily, from the 2006 to the 2020, has produced and distributed in the citrus groves and vineyards of the Island and of Calabria, more than 3 million of specimens of the vermin.

The adult’s body is about 5-6 mm long and is covered by fine down. 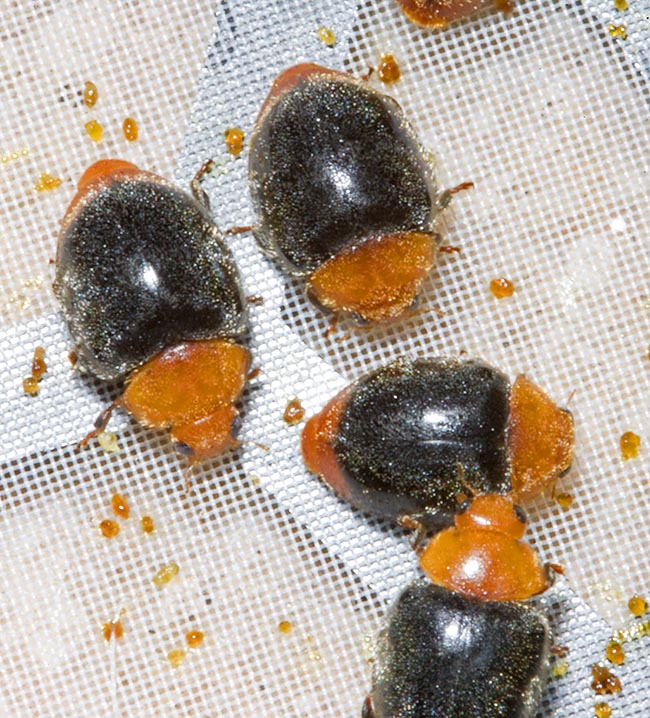 The adults, born in the insectaria cages, are put in suitable containers provided with honey droplets and transferred as soon as possible on the field, in thermal bags, for be released on the infested plants © Giuseppe Mazza

The head and the antennae are orange yellow; the compound eyes are black.

The first segment of the prothorax and the final part of the elytra have the same shade of orange, whilst the remaining part is of dark uniform brown colour, almost black.

The hindwings are membranous and well suited to flight. When resting, they are folded under the elytra.

The males have yellowish forelegs. In the females the femurs and the fore tibiae are black or greyish.

The abdomen is well protected by the robust elytra, the shape of the last segments in the males is concave, whilst in the females it is convex.

Also such morphological characteristic allows the quick distinction of the sexes, of remarkable importance when the Mealybug ladybird is employed for the biological struggle, seeing that it is necessary to introduce in the field individuals of both sexes with a prevalence of females.

The larvae, with yellowish depressed and elongated body, are denominated of “campodeiform” type due to their resemblance with the adults of primitive insects of the genus Campodea of the class Diplura.

The legs are well developed and allow a fairly good mobility in the search and pursuit of the prey. The newly born larva measures little more than 1 mm, the mature one, of the fourth age, is 14 to 20 mm long.

On the back of the body open numerous glands that secrete the long and waxy rays that confer the larvae a certain resemblance to their choice prey called Cotonelli. 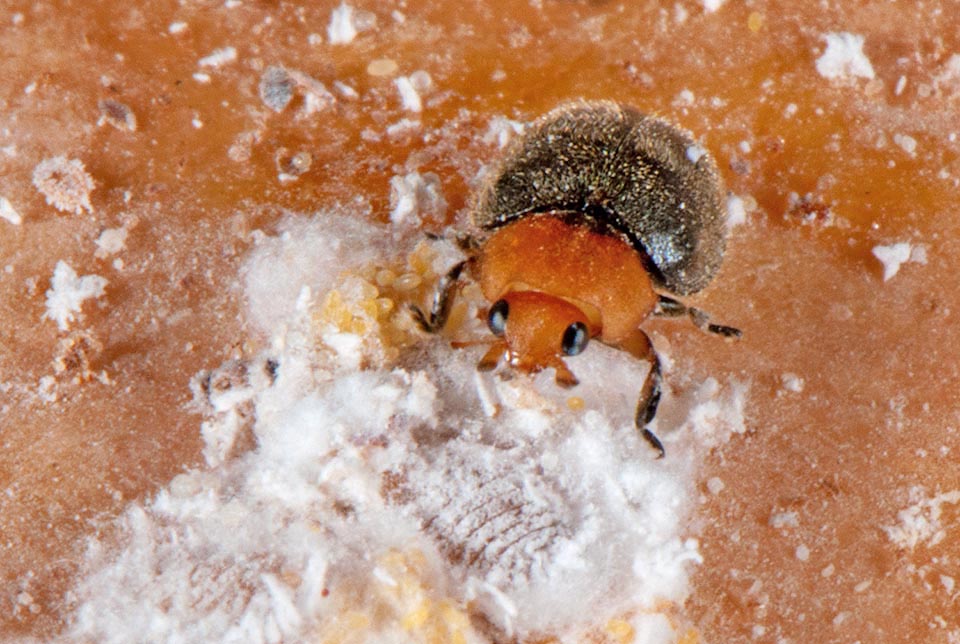 Adult close to a Citrus mealybug of the citruses (Planococcus citri). It eats its eggs, on left, and failing these, neanids © Salvatore Nucifora

The ants nourish with honeydew and protect the insects producing it, attacking the predatory species and in this case the Mealybug ladybird.

However, the larvae are protected by the waxy rays and the spherical shape of the adults offers few downsides to the ants that hardly succeed in catching them. 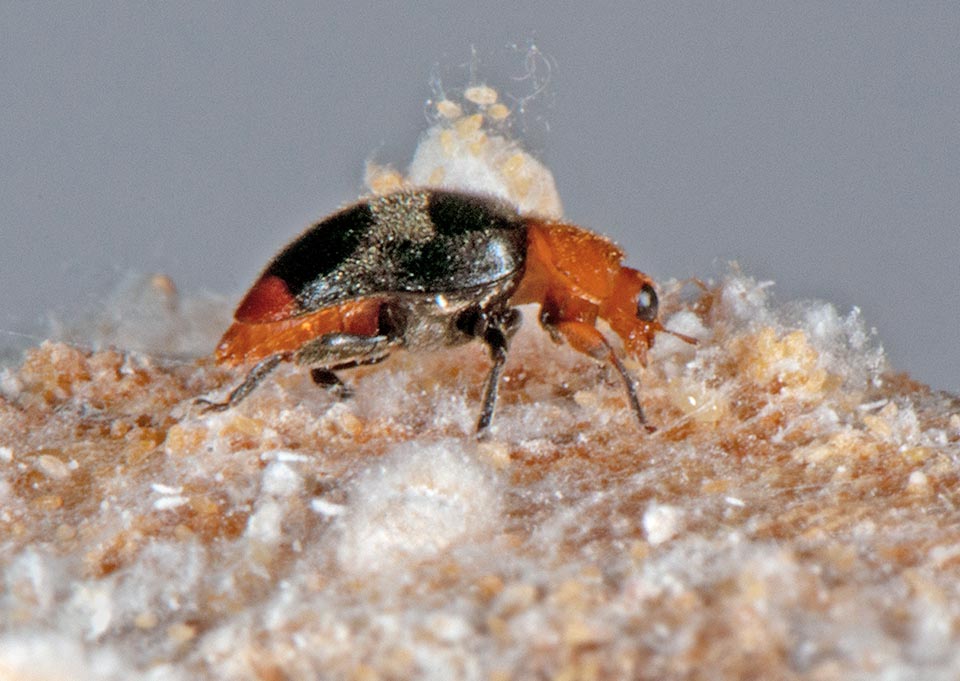 Shortly after flickering, the adults of Cryptolaemus montrouzieri move looking for the colonies of Pseudococcids guided by the smell of the sexual pheromones emitted by the virgin females, who living nearby, amplify the call signal for the tiny males.

Such sexual pheromone thus reveals itself noxious for the emitting organisms and is also called kairomone. However, the smell also calls the ants who protect the cochineals, activity that is called synomonic as it avers useful for the emitting cochineal as well as for the Ants that eat the honeydew. 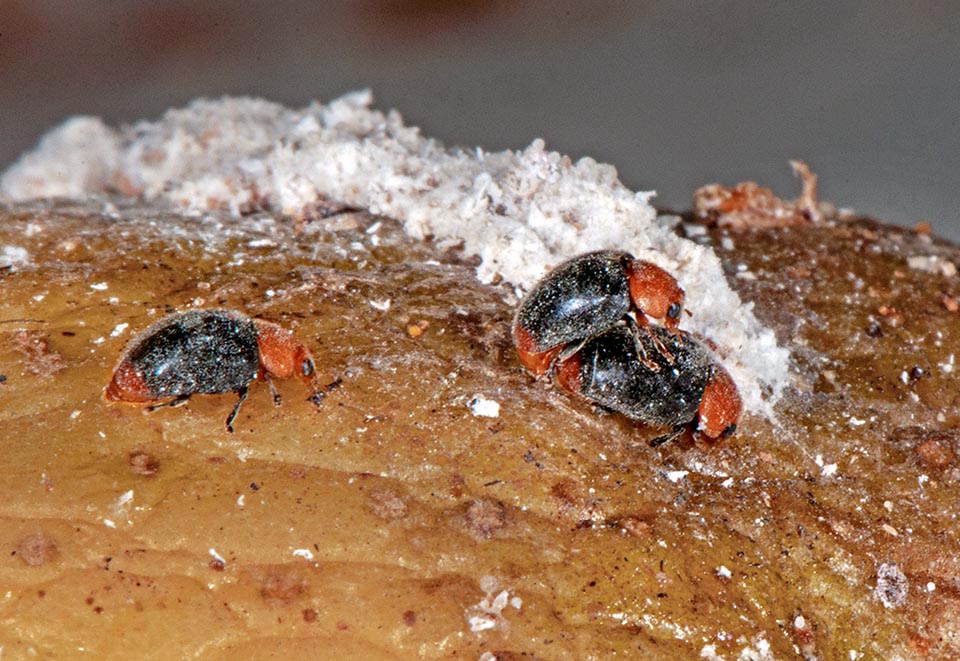 The adults of Mealybug ladybird live averagely little more than two months, during which a female begins laying the eggs, after five days from the fecundation.

In optimal conditions (with temperatures around the 25 °C), every female lays up to twenty eggs per day for a total of about three hundred elements, near the body of the prey that protects the eggs with the waxy threads secreted by the numerous glands forming an egg sac.

The newborn larva of the Cryptolaemus montrouzieri almost exclusively preys on eggs. 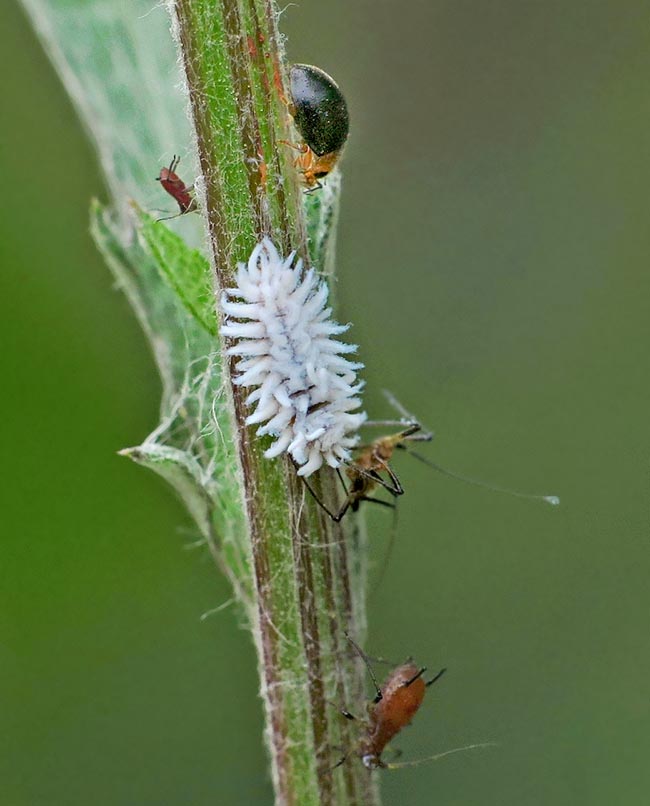 Cryptolaemius montrouzieri also predates insects among which are the aphids. On top an adult and in centre a larva that has injected its digestive liquid to a Rose aphid (Macrosiphum rosae) sucking it alive © el.gritche

Subsequently it also attacks the young forms and the pre-ovigerous females of Pseudococcids, as well as of Coccids and Aphids.

During its development, which in the laboratory ends in about twenty days, one larva destroys about 1500 eggs or 700 neanids of Planococcus citri.

Less effective is its predatory activity against the Rose aphid (Macrosiphum rosae) and against Coccids such as Coccus hesperidum and Coccus pseudomagnoliarum that are defined “replacement hosts” or “of sustenance” because they do not furnish all the elements necessary of the predator’s reproduction.

Under laboratory conditions, with ambient temperatures of about 25 °C and with relative humidity of not less than 60%, the Mealybug ladybird can reproduce without interruptions and make up to eight annual generations.

For such biological characteristics and for the exigency of its employment in biological control programs against the cochineals noxious to agriculture or to the gardens, the Mealybug ladybird continues to be bred in special establishments called insectaria or bio-factories.

In these nurseries its prey is usually Planococcus citri, which grows at the expense of potato or pumpkin sprouts.

These substrata, after the inoculation of the eggs and the formation of the colonies of the prey are transferred in special cages where are introduced couples of Mealybug ladybirds just flickered.

Maintaining a constant temperature around 27 °C and 60% of relative humidity, the cycle from egg to adult completes in about 30 days.

The adults obtained in the laboratory are placed in suitable containers from where they are freed in a nearby field or on the infested plants; here they go looking for the prey that they locate by following the odorous traces of their colonies, at the expense of which they will reproduce. In the greenhouses are preferably released the voracious larvae that cannot get away from the plants on which they have been freed. 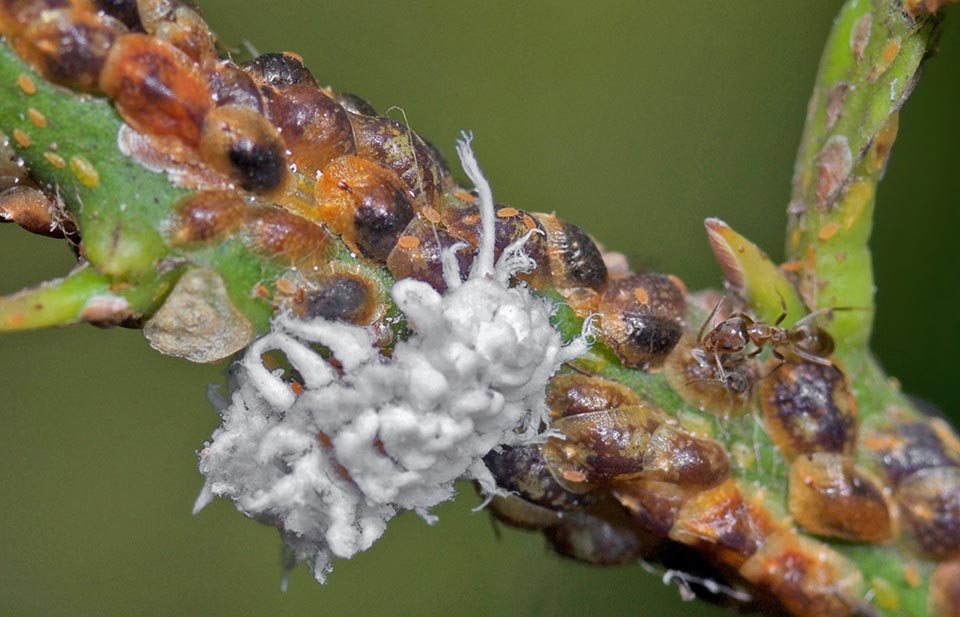 Other preys, called of replacement or sustenance, are cochineals with a weak tegument like Coccus hesperidum. This food however does not allow the insect to reproduce © Samuel Goldstein

However, if the larvae feed on replacement prey they slow down their development and, as we have seen the adults, even if surviving, they cannot reproduce normally.

The species has been described by Mulsant in 1850 as Cryptolaemus montrouzieri; later on, in 1853, Blackfurn has called it Cryptolaemus simplex.