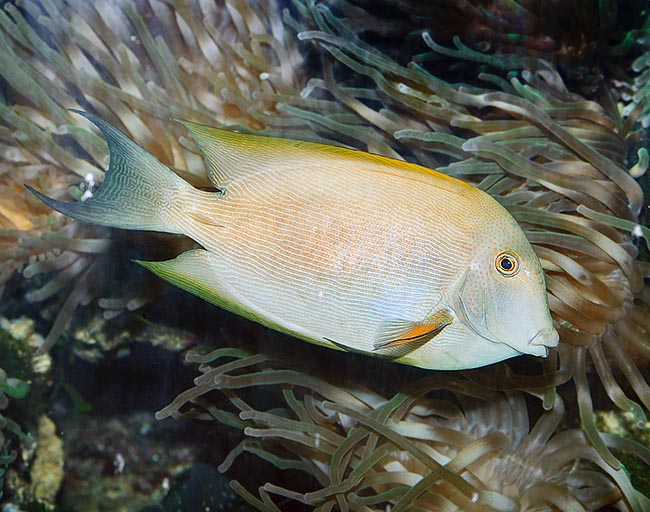 Rare in aquaria the Striated surgeonfish (Ctenochaetus striatus Quoy & Gaimard, 1825), belongs to the class of Actinopterygii, the ray-finned fishes, to the order of Perciformes and to the family of Acanthuridae.

It is a surgeonfish which does not have a precise Italian name, also because t does not concern the Italian waters and is very rare in the aquaria. Some call it “Pesce chirurgo striato” (Banded surgeonfish), but this is a name already utilized for the Acanthurus lineatus.

The Latin name of the genus “ctenochaetus”, which counts only 9 species, comes from the Greek “kteis” = comb, and “chaite” = long hair, with reference to the dentition. In fact, whereas the Acanthurus have rigid teeth, these fishes have at their place mobile bristles.

The name of the species “striatus” = striated, grooved, in Latin, refers to the finely striated drawing of the body.

The Ctenochaetus striatus has a very vast distribution in the tropical waters of the Indian Ocean, starting from South Africa, including the Red Sea, and of the Pacific Ocean, where it is very common, but fails to reach the American coasts and not even the Hawaii. The colonization stops at the Marquises Islands and Easter Island.

It lives in the madreporic formations and among the rocks rich of seaweeds between the 3 and the 30 m of depth. 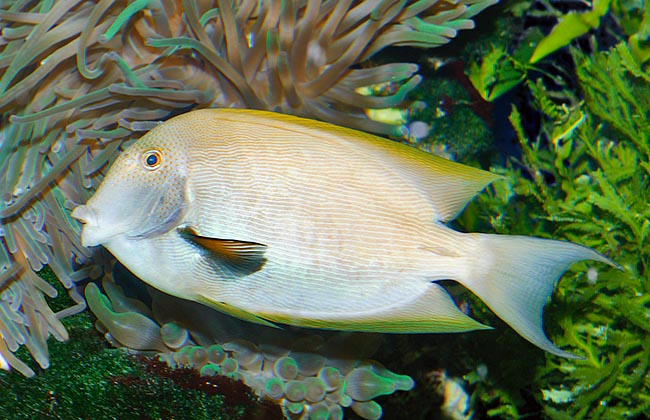 More or less toxic, of no interest for aquaria, it has a very low vulnerability index © Giuseppe Mazza

The body is often dark olive, at times brown, at times very clear. It is always evident a little showy orange dotting on the head and is often standing out the more or less orange yellow of the pectoral and the dorsal fins.

Like in the Acanthurus lineatus the cutting blade of the caudal peduncle is also here camouflaged by the drawing, but in relief.

The mouth exhibits two fleshy lips, but instead of the teeth, we find some bristles for scrubbing the bottom. Several gill rakers do exist.

It nourishes of the pellicle of diatoms and of blue-green seaweeds covering the sunny bottoms and of the small fauna of invertebrates of the coralline interstices, but the debris form the 90% of its diet. It is not surprising if then who eats it gets the ciguatera, a serious alimentary intoxication, and seen that, frankly, it is little showy, it is not even a prey for the aquarists trade. Therefore, it swims happily, in schools or often mixed to schools of other species, with a very low vulnerability index: 18 per 100, and a possible doubling of the population in only 15 months.

In Tahiti, they have noted that the weddings of the Ctenochaetus striatus are a fact of group. Thousands of fishes meet during the nights of full moon, staying motionless in midwater even for hours, with a pale grey livery. Groups of 4 or 5 fishes at the time go upwards, a few metres over the school; for freeing eggs and sperm, and then come back, in an orderly way, to their place for admiring the performances of the couples on duty. The eggs are pelagic and the juvenile forms, more coloured than the adults, have 8-12 horizontal stripes.