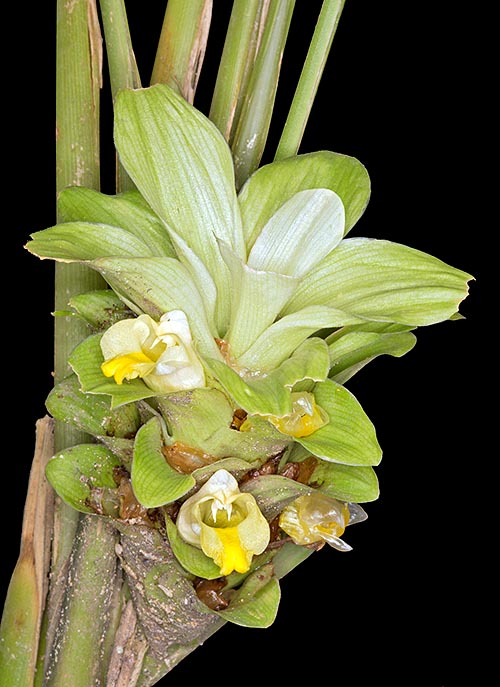 The species is native to India, Java, Sumatra, Thailand, Vietnam and Western Malaysia, where it is cultivated since remote times.

The Curcuma longa L. (1753) is a perennial rhizomatous herbaceous species, deciduous, erect, up to about 1 m tall, with basal leaves, on a 25-40 cm long petiole, simple, oblong lanceolate with pointed apex, up to 50 cm long and 10-20 cm broad, of uniform green colour, and basal sheath forming a pseudostem up to about 30 cm long.

Terminal inflorescence, on a 12-20 cm long peduncle, cylindrical, 10-18 cm long and of 5-8 cm of diameter, formed by about 5 cm long bracts with curved apex, white or white greenish in the upper half, which enclose the flowers, usually in pairs, about 5 cm long.

The flower has an about 1 cm long tubular calyx, pale yellow funnel-shaped corolla with three 1-1,5 cm long lobes, a fertile stamen and the labellum, the most conspicuous part of the flower, obovate, 1,5-1,8 cm long and broad, of cream white colour with a yellow central band, formed by two petaloid sterile stamina merged together. The upper bracts, bigger and without flowers, wavy, whitish, at times suffused of purple pink, form a sort of tuft at the apex of the inflorescence. The fruits are ovoid capsules containing ellipsoid seeds equipped with aril. 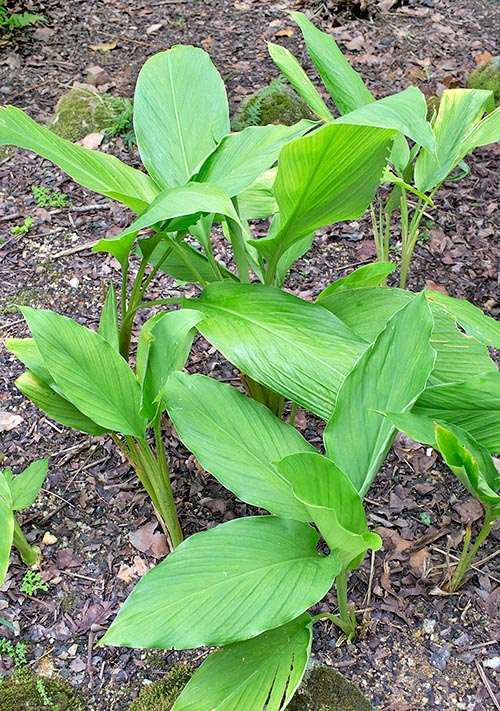 It reproduces by seed, rarely produced in cultivation, micropropagation, but usually and easily through fragments of rhizome equipped with one or two buds, placed at about 6 cm of depth, during the resting period.

Cultivable in the humid tropical and subtropical climate zones with temperatures of 20-30 °C and high annual rainfall, 1500 mm or more, it adapts to an ample variety of soils, but prefers the sandy or draining clayey ones and rich of organic substance, kept humid.

The numerous varieties which have been selected over the centuries for adapting them to the conditions of the climate and of the soil, are cultivated as annual for the collection of the rhizomes, which takes place 8-9 months after the planting when the leaves are dry, with regular watering during the drought periods and abundant fertilizations, preferably organic.

The plants are subject to several parasites and fungal diseases, the most serious being the root rot caused by Pythium spp. that may cause serious losses in the production.

After the harvesting, the rhizomes are cleaned up, boiled and dried, usually under the sun for 10-15 days, and finally mechanically cleaned from residuals of roots, scales or other.

The main constituents of the rhizome are carbohydrates (about 69%), humidity (13%), proteins (6%), mineral salts (3,5%) and fats (5%); the essential oil (5%), extracted from the rhizome in vapour stream is formed by terpenes and sesquiterpenes, among which the curcumene and zingiberene, whilst those responsible for the colour and for the characteristic aroma are curcuminoids (2,5-6%), mainly curcumin, which is the biological active component.

The powder gotten from the dried rhizomes is utilized since remote times in India, which is the greatest producer, and in some countries of south-eastern Asia as spice, dye and preservative in the aliments (admitted in Europe as food additive with the code E100), dye in the cosmetics and of the tissues and has a long tradition in the popular medicine, for caring the wounds and for various pathologies, as antioxidant, anti-inflammatory, and immunostimulant, properties confirmed by laboratory studies; it is also used in several magical and religious rites.

Detail of the inflorescence and sectioned edible rhizomes showing the characteristic orange color. Reduced into powder, it is used to flavor, color and preserve food, not to mention its medicinal properties, at the origin of magical and religious rites. India is the world's largest producer with about 900 000 t every year © Giuseppe Mazza