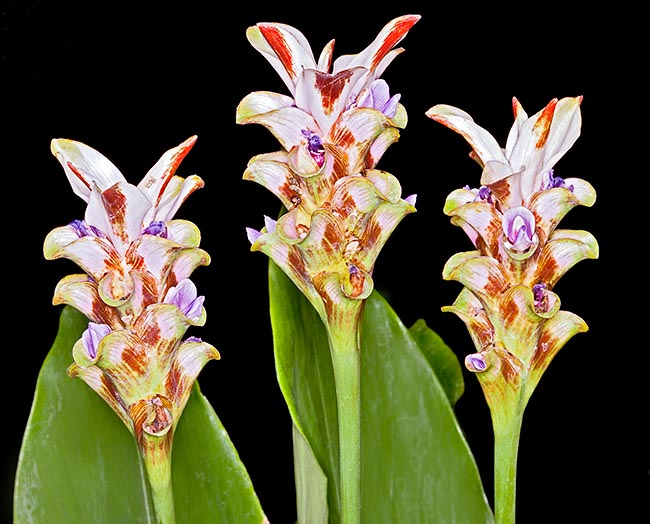 Curcuma rhabdota, too harvested in nature, is a victim of its recent horticultural success © Giuseppe Mazza

The species is native to Laos and Thailand where it grows in the deciduous or semi-deciduous forests, generally along the water streams at low altitudes.

The Curcuma rhabdota Sirirugsa & M.F.Newman (2000) is a deciduous, rhizomatous perennial herbaceous species, erect, 30-60 cm tall. The leaves, on a 15-22 cm reddish petiole, are elliptic with pointed apex, 15-20 cm long and up to 7 cm broad, of dark green colour on the upper page, pale green below. Inflorescence on 18-40 cm long peduncle reddish at the apex, terminal, erect, cylindrical, formed by 5-7 white or greenish streaked of brown red bracts, 1,5-2 cm long and 3-4 cm broad, enclosing the flowers with white trilobed corolla, about 1,5 cm long, labellum with violet margin and staminodes of the same colour. The fertile bracts are surmounted by 3-5 bracts having no flowers, white to pink streaked of brown red, forming a sort of a tuft at the apex of the inflorescence. The fruits are ellipsoid capsules containing seeds equipped with aril. It reproduces by seed in loam rich of organic substance with addition of sand or perlite per a 30%, maintained humid and in shady position, at the temperature of 22-24 °C, but usually and easily by division during the resting time.

Species among the most ornamental of the genus due to the particular colouration of the inflorescences, diffused in short time in cultivation after its description (2000) and which has already originated some hybrids. Cultivable in the humid tropical and subtropical climate zones, in slightly shaded position, on perfectly draining soils rich of humus, acidic to neutral, maintained humid; at rhizome level, during the resting period, can resist to temperatures around the 0 °C only if completely dry. In the cold climates the rhizomes may be interred in spring, 4-6 cm deep, with blooming in late summer, and extracted in autumn and conserved in dry location at a temperature preferably over the 10 °C. During the vegetative period the waterings must be regular and abundant, but without stagnations, and the fertilizations done with balanced products with microelements.

The presence in the wild of this species has remarkably reduced, due to the decrease of the habitat caused by the agriculture expansion as well as due to the indiscriminate collection of the rhizomes, so much to be placed, as “vulnerable” in the red list of the IUCN (International Union for the Conservation of Nature).