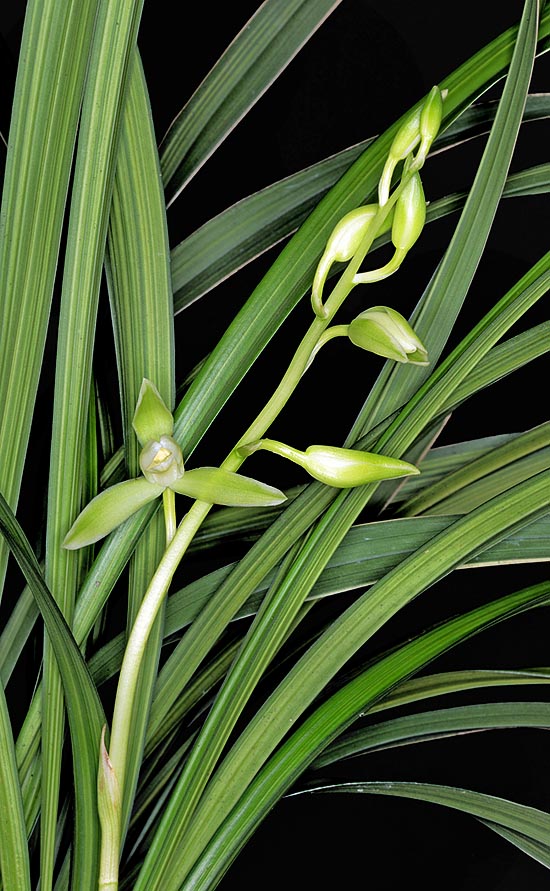 The name Cymbidium comes from the Greek “κυμβίδιον”, from “κύμβη” (cymbe) = pot, cup shaped like a small boat, with reference to the shape of the labellum; the name of the species is the combination of the Latin substantives “ensis” = sword and “folium” = leaf, with obvious reference.

The Cymbidium ensifolium (L.) Sw. (1799) is a terrestrial herbaceous species forming dense tufts with ovoid pseudobulbs, 1,5-3 cm long and of 1-2 cm of diameter, covered by the foliar bases, with 3-5 linear leaves with pointed apex, 20-50 cm long and 1-2 cm broad, coriaceous, of pale green colour; in cultivation are found also varieties with variegated foliage.

Racemose inflorescence from the base of the pseudobulb, erect, 20-40 cm long, carrying 3-10 spaced flowers of variable colour, but most frequently yellowish green with red spots on the labellum. Oblong-elliptic sepals with pointed apex, 2,4-3 cm long and 0,6-0,8 cm broad, ovate-elliptic petals with pointed apex, arranged horizontally, 2-2,5 cm long and about 0,7 cm broad, often with purple spots at the base, trilobed labellum, 1,5-2,5 cm long, with erect lateral lobes and ovate median lobe, curved, 1,2 cm broad, crossed at the base by two fleshy yellowish lamellae converging at the centre of the labellum, and arcuate column, about 1,2 cm long, yellowish with reddish spots; have been selected varieties with wholly white or green flowers. The fruits are ellipsoid capsules of about 5 cm of length and 2 cm of diameter. The flowers emit an intense pleasant smell.

It reproduces by seed, in vitro, micropropagation but usually and easily by division, with each section provided with at least 3-4 pseudobulbs. Cultivated since remote times in China due to its elegant foliage and the delicacy and fragrance of its flowers lasting 2-3 weeks, appearing from mid summer to early autumn, it distinguishes due to the adaptability to different conditions of cultivation, as shown by the ample distribution in the wild, and has originated numerous hybrids to which confers a compact habit and the capacity to bloom in warm climates in the summer period.

It can be cultivated in open air, preferably on sandy soils rich of humus, in the tropical, subtropical and temperate climate zones, in semi-shaded position in summer, up to full light in winter, not needing, like many other species and hybrids of the genus, the maximum luminosity and low summer temperatures for blooming, characteristic which, as said before, transfers to its hybrids, conversely, temperatures under the 20 °C, during the vegetative season, slow down the growth and can negatively influence the formation of the floral gemmae. Elsewhere, it needs temperate greenhouse, with humidity 50-60% and good and constant ventilation, but adapts also to the cultivation in apartment; the waterings must be regular and abundant when in vegetation, but without stagnations, slightly more spaced after the blooming and until the vegetative restart, utilizing rainwater, by reverse osmosis or demineralised. The fertilizations, during the growth, are to be done using hydrosoluble balanced products, with microelements, at half the dosage suggested by the producer. It is preferably cultivated in deep pots with good drainage utilizing compost based by bark fragments or coir with addition of coarse peat, perlite and charcoal. Frequent repottings and divisions are to be avoided as the roots do not like to be disturbed; moreover, the tillered plants bloom more easily and abundantly.

The leaves are utilized in the traditional Chinese medicine for various pathologies.