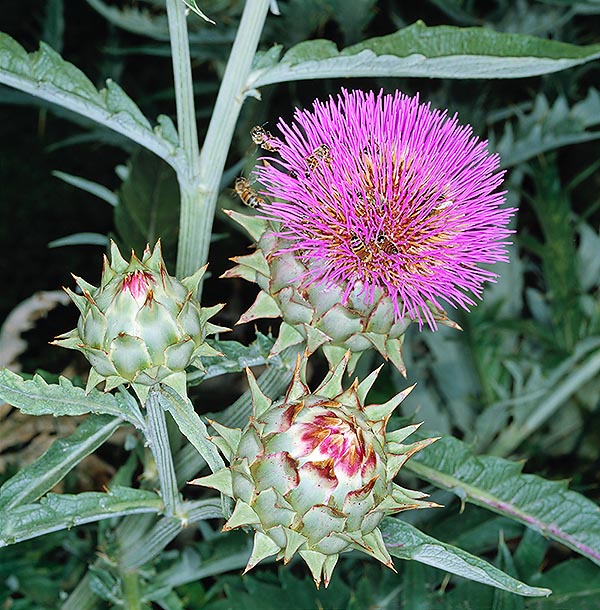 The plant is native to Africa (Algeria, Canary Islands, Libya, Morocco and Tunisia), and to southern Europe (France, Italy, Portugal and Spain).

The name of the genus, endorsed by Linnaeus, comes, after some, from the Greek “kynara”, name given to various thorny plants, after Lucius Iunius Moderatus Columella, Latin writer of the first century A. C., the first one to cite this plant with the name “cinara” in his famous opus “De re rustica”, comes from the habit to fertilize it with ash, in Latin “cinis, cineris”.

The name of the species is the diminutive of the Latin word “carduus” = thistle; the name of the subspecies comes from the Latin verb “flavescere” = to become yellow, to ripe, with reference to the yellowish margins of the median bracts of the involucre.

Cynara cardunculus subsp. flavescens Wiklund (1992) is a perennial herbaceous species with thick tap root, fleshy, and tuberous lateral roots and a short stem which at the moment of the blooming produces at the apex a cylindrical floral axis, tall up to about 1,8 m, glabrous or tomentose, slightly longitudinally grooved and ramified by the apex. The basal leaves, on a petiole equipped at times with thorns, are of irregular shape, 30 to 200 cm long, with green grey lamina, more or less covered by a white tomentum, in particular on the lower page, and a prominent central nervation. The margins of the leaf are deeply lobed with lanceolate to oblong lobes, the margins of which may be entire or indented, unarmed or spiny, with thorns, 1-30 mm long, usually more present at the base of the lobes and at the apex. The upper leaves close to the head flower are usually lanceolate, with entire, or irregularly lobed, unarmed or thorny.

The inflorescences, at the apex of the ramifications, are the typical flower heads of the Asteraceae formed by a crowd of sessile flowers spirally inserted on a roundish base, the receptacle, surrounded by an involucre formed by imbricate bracts. The semi-spherical or ovoid involucre, 3 to 15 cm tall and 4 to 15 cm broad, is formed by 5 to 8 series, or even more, of imbricate bracts, lanceolate or ovate, of a dark green colour suffused at times of purple, thick and fleshy at the base, with yellowish margins and sharp apex ending in a robust 2-5 mm long spine. The receptacle, concave, is initially equipped of thick, silky hairs, 2-4 cm long, which are the floral primordia of the 600-1200 bisexual flowers, thin, tubular with blue or purple corolla, 3-5 cm long, of which are mainly visible the long blue styles. 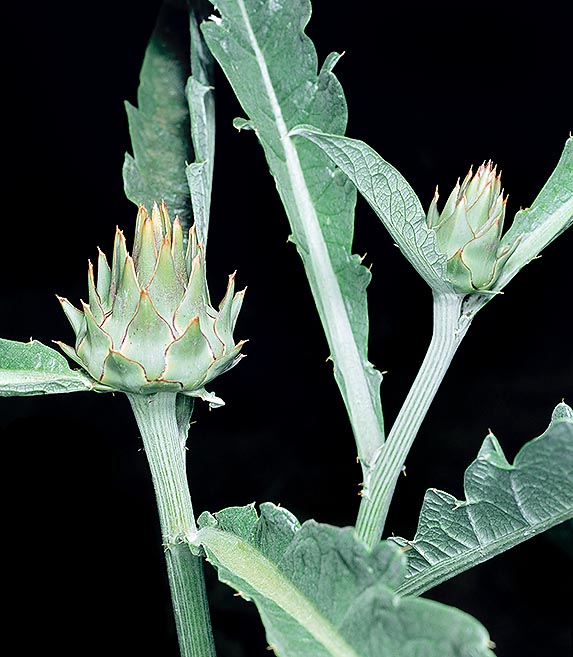 The blossoming proceeds from the periphery to the centre; in the flowers the male organs, the anthers, ripe before the female ones, the stamina, with the pollen remaining active for 3-4 days, whilst the stamina are receptive starting from the fourth, fifth day up to the eighth from the opening of the flower. This behaviour, (protandry), which is one of the characteristics, even if not exclusive, of all the Asteraceae, makes the single flowers self incompatible, and therefore the crossed fecundation becomes necessary, even if a self pollination at the level of the head flower itself is possible to the graduated blooming.

The fruits, containing one seed only and called achenes (or, more correctly, cypselae) in the Asteraceae, are 4-8 mm long, with an almost quadrangular section, of a greyish brown colour.

The pappus, which surmounts the fruit, is formed by a crown of bronze, 2-4 cm long bristles, united at the base to form a ring, which are nothing else than the silky hairs present in the receptacle before the development of the flowers; the pappus has the function of helping the dispersion of the fruits.

There are in cultivation numerous varieties of this species, distinguished mainly by the colour of the bracts of the involucre (green or violet) and by the presence or absence of spines at their apex. Recent studies evidence Sicily as the place where, around the first century A.C., its cultivation and varieties selection have started, later on spread, along with its name, by the Arabs who occupied the island from 827 to 1091.

In the Middle Age, in Europe, this plant was initially utilized as medicinal plant for its digestive virtues; only from the XV century we have information of an alimentary utilization in Italy and later on in France. The edible part is formed by the receptacle, the fleshy base of the bracts of the involucre, in particular the most internal ones, and the peduncle which has no cuticle of the flower head before the blooming begins. Italy is the first producing country in the world.

The artichoke prefers warm and dry climates, clayey and calcareous grounds rich in organic substance, deep and draining; it doesn’t like, in fact, the water stagnations, especially in winter. It is rather sensitive to the low temperatures. By 0 °C it will stop the vegetation and the outer bracts of the flower heads begin to get damage; around the -3 °C, all the flower head is completely damaged and therefore cannot be any more commercialized. Starting from the -5 °C, all the aerial part gets damages and partly also the interred one which will die by around the -10 °C. The annual vegetation cycle in the Mediterranean regions is characterized by a summer resting time, beginning of vegetation in autumn and beginning of the blooming, when the leaf has at least four leaves, induced by a period of 200-250 hours at temperatures around 7-10 °C or little less. The completion of flowering and the fructification take occur in spring. 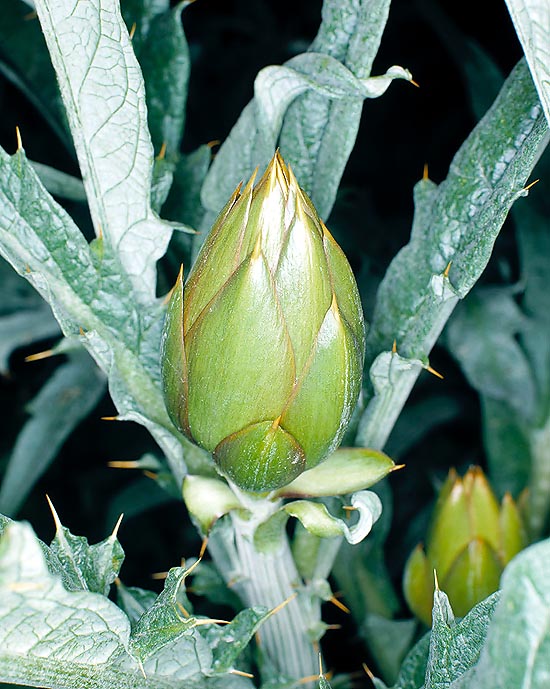 Cultivated form of artichoke. The flower head is much more meaty © Giuseppe Mazza

It may reproduce by seed, which easily self disseminates, so much that it has naturalized in some areas climatically favourable where it has been introduced, but this is a method little utilized in cultivation, not only because the first blooming, and therefore the first harvest, happen usually by the second year, but also because the new plants may have characteristics differing from those of the mother plant. This method is utilized for the genetic improvement.

In the first one, they utilize the basal suckers, called in Italy “carducci” (offshoots), which form in autumn by the time of the vegetative restart and which usually are in any case removed, but the strongest one, in order not to take off nutritive substances at the time of the flowering.

The offshoots for the reproduction are taken away with some leaves at the base when they have 4-5 leaves; when planted in late autumn will give the first flowering the following spring.

In the other method, they utilize the “ovules” which are portion of rhizomatous root, with one or more buds, which are usually taken by the beginning of the resting time, usually from the old plants.

They are sprouted between June and August wetting them and then are put in place at about 20 cm of depth; entering in vegetation before the offshoots, the first harvest, climate permitting, might be done already in autumn-winter.

By shifting the date of plantation, we may get graduated harvests.

Besides as an aliment, the artichoke has been amply utilized in the popular medicine for its digestive and liver dexoticating properties due to the active principles contained in the leaves, such as the inulin, the flavonoids derived from the luteolin and the cynarin, which in reality, is present only in very small quantities in the leaves, but which forms during the process of extraction.

The choleretic effect (that is of stimulation of the biliar secretion) of the extracts of the leaves is confirmed also by several studies made also on the man, but its utilization is contraindicated in the subjects allergic to the Asteraceae, with obstructions to the biliar ducts and stones on the gallbladder, whilst the effect of lowering the cholesterol levels in the blood is still under study and the preliminary data are not all in concordance.