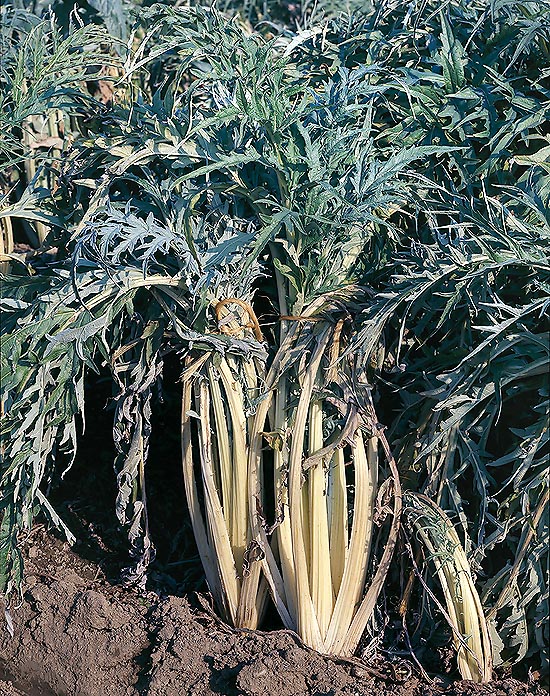 The plant is native to Africa (Algeria, Canary Islands, Libya, Morocco and Tunisia) and to southern Europe (France, Italy, Portugal and Spain), where it grows mainly in the coastal areas on semi-arid soils, usually clayey.

The name of the genus, endorsed by Linnaeus, comes after some from the Greek, “kynara” = name given to several spiny plants; the name of the species is the diminutive of the Latin word “carduus” = cardoon.

The Cynara cardunculus L. (1753) is an herbaceous perennial plant with a radical apparatus composed by a thick and fleshy tap root, which may even reach the 2 m of depth, and tuberous lateral roots; the stem is short and only by the blooming time produces a cylindrical floral axis, tall up to about 1,8 m, glabrous or tomentose, slightly grooved in the longitudinal way and ramified by the apex. The basal leaves are 30 to 200 cm long, pinnatifid, with lanceolate to oblong lobes and entire or indented margins, unarmed or thorny, with thorns usually more present at the base of the lobes and at the apex; the lamina is green grey more or less covered by a white tomentum, in particular in the inferior pagina, and with a prominent, wide, thick and fleshy central nervation. The upper leaves get progressively smaller and become almost lanceolate.

The inflorescences at the apex of the ramifications are the typical flower heads of the Asteraceae, formed by a crowd of sessile flowers spirally inserted on a roundish base, the receptacle, surrounded by an involucre formed by imbricate bracts. The involucre, semi-spherical or ovoid, is 3 to 6 cm tall and 4-7 cm broad, and is formed by 5-8 series of imbricate bracts, lanceolate or ovate, of dark green colour at times suffused by purple, with sharp apex ending usually in a thin, 9 mm long, spine. The receptacle, concave, is initially equipped with thick silky hairs,2-4 cm long, which are the floral primordia of the 600-1200 bisexual flowers, thin, tubular with blue or purple corolla, 3-5 cm long, of which are visible, above all, the long blue styles.

The blooming proceeds from the periphery to the centre; in the flowers the male organs, the anthers, ripe before the female ones, the stigmas, with the pollen remaining active for 3-4 days, whilst the stigmas are receptive starting from the fourth , fifth days up to the eighth from the opening of the flower, this behaviour (protandry), which is one of the characteristics, even if not exclusive, of almost all the Asteraceae, renders the singe flowers self incompatible, and therefore necessary the crossed fecundation, even if a self-pollination at level of the flower head itself is possible thanks to the graduated blooming. The fruits, containing one seed only and called achenes (or more correctly, cypselae) in the Asteraceae, are 4-8 mm long, with almost quadrangular section, of greyish brown colour. The pappus, which surmounts the fruit, is formed by a crown of white or bronze bristles, 2-4 cm long, united at the base to form a ring, which are nothing else than the silky hairs present in the receptacle before the development of the flowers; the pappus has the function to help the dispersion of the fruits. It may reproduce by seed, which self disseminates so easily to become naturalized in some climatically favourable zones where it has been introduced, or by division.

In the wild, it grows on arid and semi-arid soils, even salty, deep and draining, mostly clayey-calcareous. The vital cycle follows the seasonal rhythm of the Mediterranean climate, with a period of summer rest, beginning of the vegetation with the first autumn rains, growth in autumn-winter and blooming and fructification in spring. The species is known and cultivated since the remote ages in the central-southern Mediterranean both as vegetable and for its digestive and detoxifying properties due to the active principles contained in the leaves, such as the inulin, the flavonoids derived from the luteolin and the cynarin, which in reality is present only in small quantities in the leaves, but which forms during the extraction process. 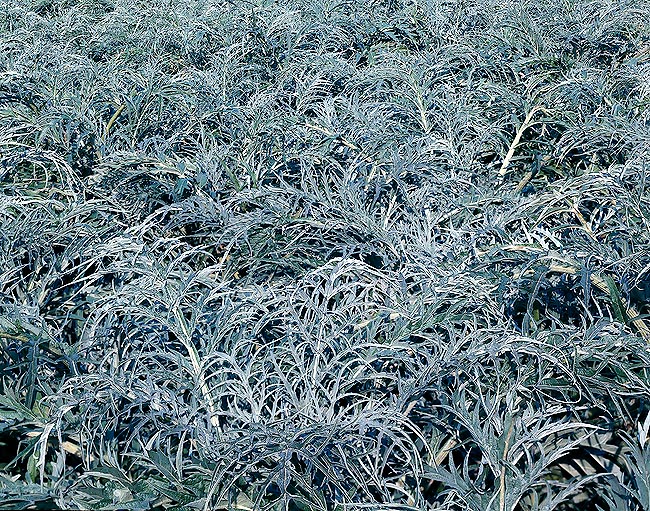 Field of cardoon. Decorative leaves, also for the garden, and a prelude to excellent gratins © Giuseppe Mazza

The varieties cultivated for alimentary utilization are the result of a long process of selection and diversification, which has originated several local typical produces.

The edible part of the cardoon is the base of the inner leaves and the vegetative apex before the same diversifies in the floral axis; precise cultivation techniques are followed in order to obtain a product with very good organoleptic characteristics.

It is sown, on a yearly basis, in spring in deep, slightly alkaline and rich of organic substance soils; it is to be irrigated regularly in summer and by the beginning of autumn it must be submitted to the operation of the “bleaching” which has the purpose to render more tender and less sour, and paler, the bases of the leaves.

This operation consists in collecting and binding together the leaves, well dried for avoiding rottenness, and covering their base with a cone of earth or, more recently, with a black plastic film; a variant is to dig a furrow at the base of the plant, to gently fold the leaves into it and cover their base with earth.

After two, three weeks, the uprooted plants, deprived of the roots and of the upper part of the leaves which have remained green, are ready to be placed on the market. The cardoons may be eaten raw; boiled or fried in batter (mixture made of flour and water with which the cardoons are to be covered before frying, a widely utilized method in the Sicilian cuisine also for the artichokes).

An old utilization of the dried flowers is that in the production of cheeses, in fact the flowers contain a coagulating enzyme, the first ever utilized for this purpose, replaced later on by the animal rennet but some typical cheeses of Italy, Portugal and Spain. Recently, there has been a certain resurgence of interest for the vegetable rennet which gives the cheeses an aroma which is more delicate if compared to the animal one.

Finally, we must not forget that the species, and even more the varieties selected for this purpose, have a remarkable ornamental value due to the bright green-grey colour of the slightly curved big leaves, which recall those of the ferns.

Also the inflorescences are particularly decorative and long lasting and may, once exsiccated, enter in full title in the dried flowers compositions. Due to its dimensions, it is suitable for spacious gardens as a background, for edges or flower-beds, where it represents always a focal point; it is often utilized in the English gardens where it has reached the maximum popularity during the Victorian age. Its cultivation does not present particular difficulties and in the particularly rigid climates zones (the whole plant deceases by around -10 °C) it may be cultivated as annual, seeding in protected location by late winter or directly in the soil in spring.

→ To appreciate the biodiversity within the ASTERACEAE family click here.