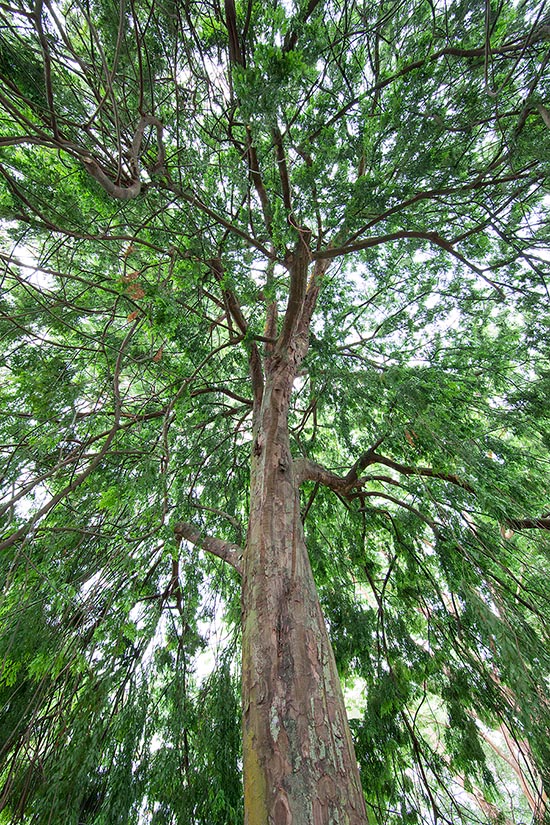 Native to South-East Asia, Dacrycarpus imbricatus is a dioecious evergreen, up to 40 m tall © Giuseppe Mazza

The species is native to the Bismarck Archipelago, Morneo, Cambodia, China (Guanxi, Hainan and Yunnan), Fiji, Java, Laos, Lesser Sunda Islands, Malaysia, Moluccas, Myanmar, New Guinea, Philippines, Sulawesi, Sumatra, Thailand, Vanuatu and Vietnam where it grows in the pluvial forests, representing in some areas the dominant species, from low altitudes up to about 3000 m.

The name of the genus is the combination of the Greek substantives “δάκρυ” (dacry) = tear and “καρπός” (carpós) = fruit, hence fruit shaped like a tear; the specific name is the Latin adjective “imbricatus, = imbricate, with reference to the leaves.

The Dacrycarpus imbricatus (Blume) de Laub. (1969) is an evergreen resinous dioecious tree, up to 40 m tall in the old specimens in nature, with erect cylindrical trunk, of up to about 2 m of diameter, with dark brown wrinkled bark that peels off in small flakes and thick top with usually drooping lower branches. Almost linear leaves in the young plants, 10-17 mm long and 1-2 mm broad, but at the base of the trunk where they are short and acicular of green to glaucous green colour. In the mature specimens and on the fertile branches the leaves become shorter and needle-shaped, 1-3 mm long, imbricate and spirally arranged.

Lateral male cones, rarely terminal, subtended by few leaves reduced to scales, initially ovoid, the cylindrical when ripe, 6-12 mm long and of 2-2,5 mm of diameter; microsporophyllic (modified leaves that carry the pollen sacs) with pointed apices, each one bearing two pollen sacs. Terminal female cones, solitary or in couple where only one is fertile, 3-6 mm long, subtended by acicular involucral leaves 3-5 mm long, with one-two bracts widened at the base to form the receptacle and one-two fertile bracts at the apex; the receptacle when ripe becomes fleshy, initially glaucous, then red or red-orane. The seeds are globose, 5-6 mm long and of 4-6 mm of diameter, covered by a thin fleshy layer called “epimatium”, red when ripe.

It reproduces by seed, freed in the shortest possible time from the fleshy layer that contains inhibitors for the germination, in organic loam maintained humid at the temperature of 24-26 °C, with germination times from 1 to 3 months. 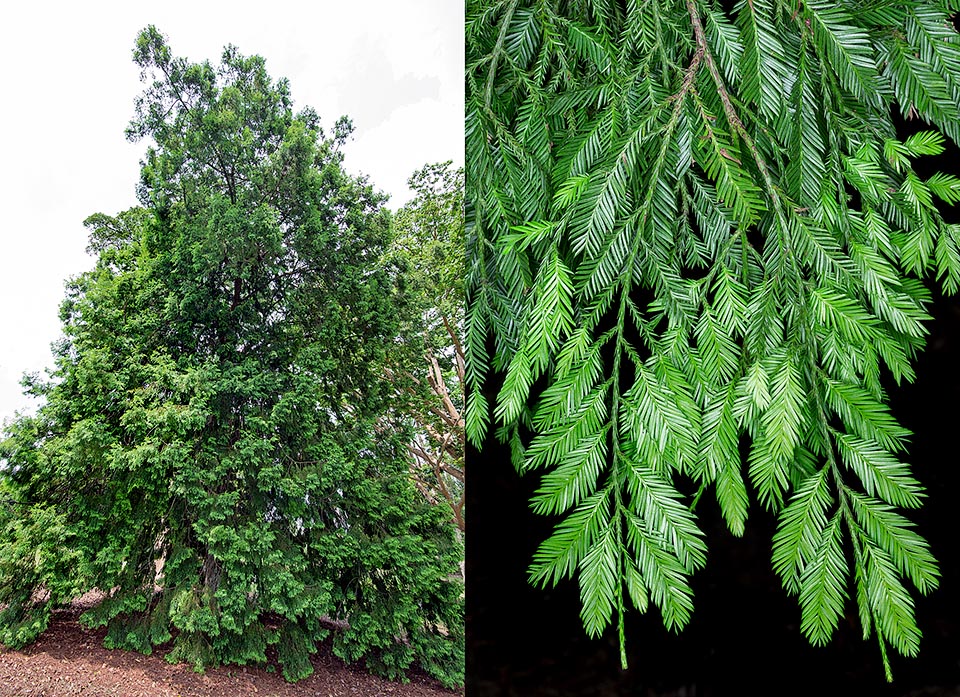 Often cultivated as ornamental in tropical parks and gardens, it has also a certain economic importance in the origin areas due to the good quality wood © G. Mazza

Conifer among the most diffused in south-eastern Asia that has a certain economic importance in the origin zones due to the wood of good quality, locally utilized and in a less extent exported. Often cultivated as ornamental in parks and gardens of the tropical and subtropical zones, not bearing temperatures just less than 0 °C, if no exceptional and for a very short period. Requires high luminosity, but in the juvenile phase when it bvears a partial shade, and fertile soils, draining, maintained almst constantly humid. The wood of yellow colour and fine grained, easy to work and to refine, is utilized in the constructions, for furniture, boats, panelling, plywood, tools and handicrafts and artistic objects. The species is often utilized in the reforestation of degraded areas, finally is a subject very utilized and appreciated for bonsai..