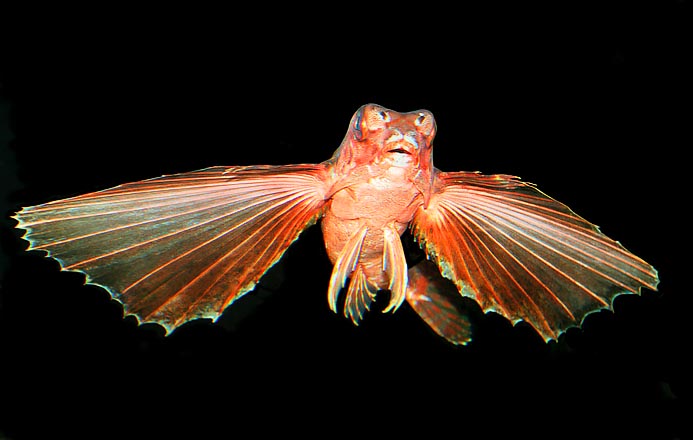 An owl flying in the night ? No, a Dactyloperus volitans exploring the seabed © Giuseppe Mazza

The very unusual Flying gurnard, also known as the Helmet gurnard (Dactylopterus volitans Linnaeus, 1758), belongs to the class of Actinopterygii, the ray-finned fishes, to the order of Scorpaeniformes and to the small family of Dactylopteridae.

The name of the genus comes from the Greek “δάκτυλος” (dactylos) = finger and “πτερόν” (pteron) = wing, with reference to the huge pectoral fins, and that of the species, from the Latin, “volitans” = who is flying, referring to the old belief that these fishes might fly out of the water.

Actually, our Dactylopterus volitans too heavy for doing this, and contents itself in twirling on the seabed looking for food, up to 100 m of depth.

The Italian name of “Pesce civetta” (owl fish), probably originates from the big round eyes, the wide wings and the maculate and streaked look of its livery which may lead to think to the feathers. Not to mention the fact that, like the owl, takes us aback by spreading the wings.

It is diffused on both Atlantic coasts and in the Mediterranean, but not in the Black Sea. It is very common in Italy and is occasionally caught with the dragnets, or stupidly harpooned by divers, seen that its flesh is edible, but, by sure, not prized. 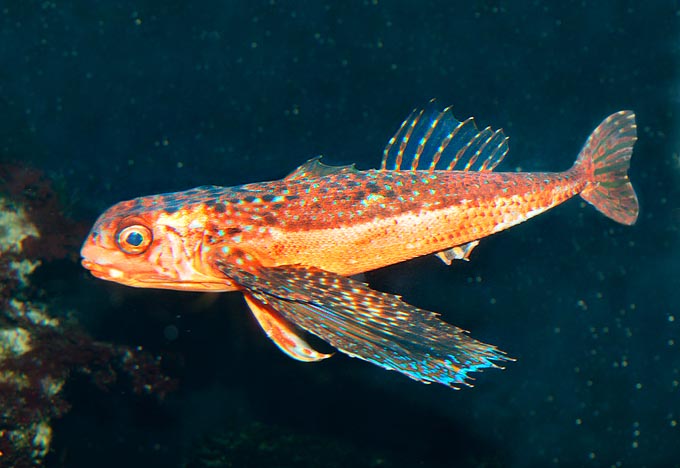 It reaches 100 m of depth, but, used to the tropical warmth, it dies frostbitten under 13 °C © Giuseppe Mazza

It loves mainly the sandy seabeds where it preys small fishes, ferreting out, in the mud, with the forward part of the pectorals, small crustaceans and molluscs which form its preferred dish, and seen that it frequents the tropical and subtropical seas, it is not rare to meet it close to the coral reefs or in the mangroves formations. It is also present in the brackish waters, at the mouth of the rivers.

In the Mediterranean it swims, usually, at depths between the 15 and the 45 m, but also in more shallow waters.

The head is massive, protected by bony plates prolonging in two points as sharp as daggers. Same thing for the opercular bones and most of the body is covered by serrate and cutting protuberances, especially at the caudal base.

An armoured fish, indeed, almost box-shaped, but what is most striking, especially in the young, is the size of the eyes and the enormous reddish pectorals of the adults, with blue spots and brown patterns on the upper side.

The chocolate coloured body has similar dark and blue spots nearby the head. It looks like that these colours are useful for camouflaging and frightening the aggressors who, when it’s with the spread wings, suddenly encounter a different and bigger animal. 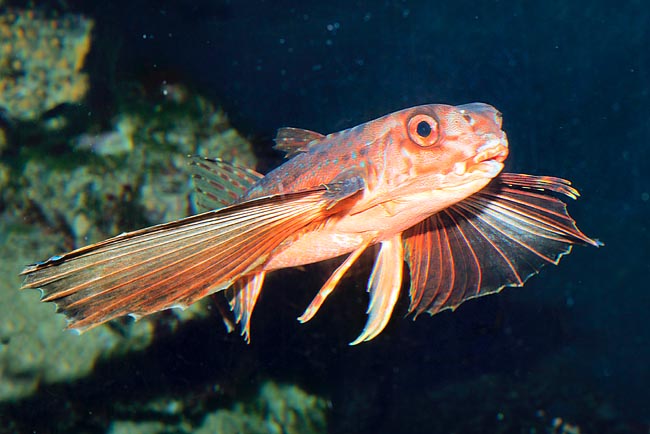 The pectoral fins are divided in two. The front ones serve to scrape the seabed seeking food © Giuseppe Mazza

Actually, the pectorals are formed by two separate and well distinct parts: a big one, of elliptic shape, which may have even a thirty very flexible rays, and a forward one, formed by six more rigid rays, united forming almost some “legs”, with important touch functions allowing the flying gurnard to “walk” on the bottom and dig it looking for preys.

Even if it does have many natural predators amongst the fishes, to which we have to add the sea birds, the Dactylopterus volitans is not, by sure, an endangered species, due to its vast distribution and the little ichthyic value of its flesh.

The reproduction occurs in summer, with several pelagic eggs, and a very fast embryonic development, with variable geometry, with different forms in the various stages of growth.

It well adapts to the big aquaria life, but if the temperature drops under 13 °C, it will die of hypothermia.

The vulnerability index of this species is of 31 over 100.