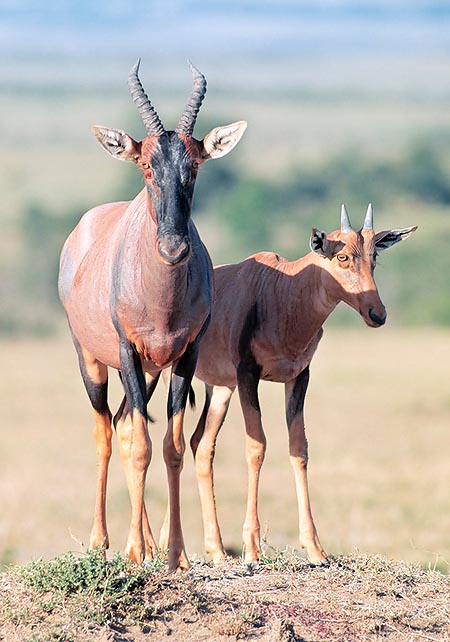 The Damaliscus lunatus Burchell, 1823 is an African herbivore belonging to the order of the Artiodactyls (Artiodactyla), to the family of the Bovids (Bovidae) and to the subfamily of the Alcelaphins (Alcelaphinae).

Until further notice, this species is subdivided by the zoologists into 6 subspecies, for the truth, often very similar:

the Damaliscus lunatus purpurescens, called Korrigum of Cameroon, at home in Nigeria, in northern Cameroon, and in the southern part of Sudan.

the Damaliscus lunatus jimela, called Topi, with a distribution range which includes scattered areas of southern Kenya, western and northern Tanzania, eastern Uganda, Rwanda, the extreme oriental and northern part of Congo and a small part of south-western Somalia.

In this text we shall treat of the last one, keeping in mind, however, that what will be said applies also and in great part to the other subspecies. Albeit slightly, among the various damalisks, the topi is the smallest one, as it may reach the 115-125 cm at the withers, and weigh up to 120 kg. It’s the one having the less imposing trophy, with horns which may reach the 60 cm in the males the average is however lower), but in return, is also the most “coloured”.

Even if having a livery much similar to the other subspecies, is, in fact, of a brighter and deeper red, almost iridescent, on which stand out some big bluish dots: one on the thigh which goes down up to half of the hind limb, and one on the shoulder, also this prolonged to half length of the fore limbs. A similar dot is visible on the back of the muzzle, whilst the lower part of the legs has the same colouration of the rest of the body.

Both sexes are endowed of horns, but these ones are usually shorter and less thick at the base in the females. They are markedly annular, with much prominent rings, almost like an ibex, curved backwards, practically, with an anterior convexity. Often, the apices describe a further slight curve, bound inwards and with anterior concavity. Very much characteristic is the shape of the animal seen from the side, with the shoulder decidedly higher than the back and often with a hint of hump. Long legs and relatively thin but robust, which reveal a calling to the race and, like all markedly corridor artiodactyls, the fore limbs are more developed, so much that also the anterior foot is of a bigger size than the back one. 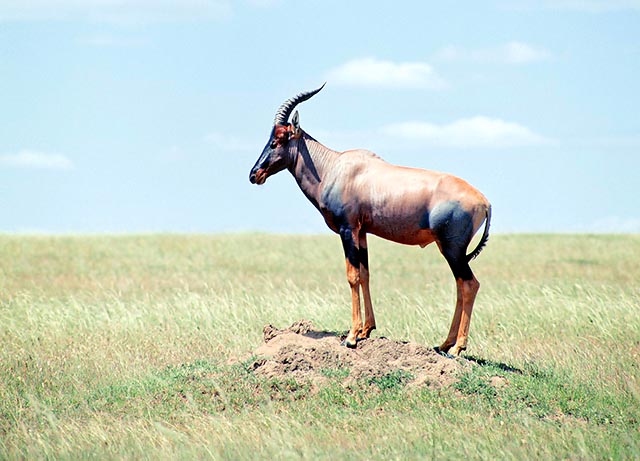 The topi has often odd behaviours. Here is a male standing still on a termite nest © Giuseppe Mazza

The foot leaves a trace shaped like an elongated trapezoid or like a triangle with blunt tip and we notice, if the soil conserves well the trace, the marked inner concavity of the two “nails” or hoofs, so that the trace has an “empty” area inside and the two nails appear thin and sharp.

The traces cannot be, in fact, distinguished from those of other species of lunatus, and for recognizing the trace on the field, the knowledge of the species present in that area is essential. The faeces have the shape of small spheres or “chestnuts” of about one centimetre of size, separate and well formed in the dry season, softer and often bonded together during the rainy season, or when the animal has been eating humid and juicy vegetables.

The head is typically as a hartebeest, with elongated muzzle which, if seen from the front, seems to get narrow, and then to widen at the level of the nose. The ears are developed and elongated, often with the inner side of the auricle pale, on which stands out a darker spike-like design. The tail is thin and of medium length, usually with black or, in any case, very dark tip.

It is a basically gregarious animal, which lives, usually, in herds, comprising from 15 to 30 heads, but are not rare even bigger groups, even up to hundreds of heads, especially during the seasonal migrations connected with the rains. The adult males are territorial, but only during the mating period, and defend a territory where only females and young may move freely.

Then, once the heat time has passed, this territoriality dissolves, and males and females tend to form separate groups. However, in the Masai Mara, in Serengeti, and in much open areas of the Masai steppe, often the male has very vast territories, which it shares with one or more females, which cooperate in keeping away the “invaders” of both sexes. These territories may be kept for long periods. In other zones, on the contrary, the territoriality is more episodic and the males defend a rather small territory, at the centre of which are one or more trodden areas, so much to clear the turf and on which are laid the faeces. 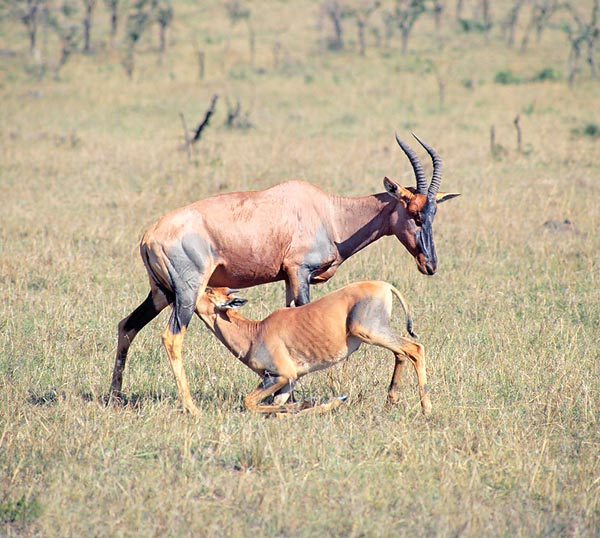 The young follow the mother when about 15 days old; nursing may last long © Giuseppe Mazza

The topi is strictly a grazer, which eats the grasses from the soil, contenting also of coriaceous and sour herbsn not appreciated by other herbivores, and this explains its great “success” and its abundance.

When the water is available, it goes there regularly for drinking, but can do without for fairly long periods, getting the needed liquids from the food.

The preferred habitat is the open savannah and the shrubby one, but with grassy zones, and does not get scared by rather arid zones, thus showing a great adaptability.

The peaks of activity are in the morning and in the late afternoon, whilst the hot and central of the day hours are spent in the shade, ruminating.

The defence from the foes stands in the escape. The topi is a fast and resistant corridor, with a marked gallop, with remarkable vertical leaps which only apparently do slow it down.

At times, it has inexplicable behaviours, which have granted the reputation of being a not particularly astute animal. From time to time, for instance, and without reason, starts galloping wildly, as if it had an evil after it; at times, it stands still, even if in presence of a danger, without showing any sign of alarm. Sudden and apparently messy leaps have granted this animal the name of clown of the bush and it is not rare to see it staying, almost like a lookout, on a termite nest or another mound, like a monument placed in the middle of the savannah. The main predators of the adult are the lion and the leopard, but the cubs and the young are predated also by cheetahs, caracals, servals, rock pythons and even big eagles.

The females reach the sexual maturity when one year and a half old, the males around the three. The births take place once a year, usually in the rain season, when the grasses are tall. The cub remains hidden into the grass for some days and is able to follow the mother when about two weeks old, but only around the four months it begins to get the typical colouration.