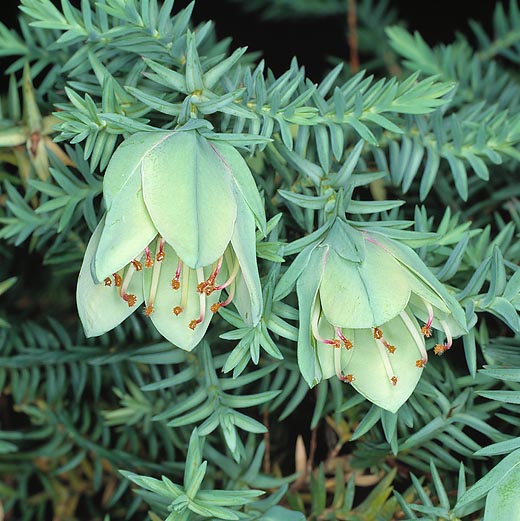 This species is native to south-western Australia (Western Australia), where two remaining populations do grow on lateritic soils close to Narrogin and Mogumber.

The genus is honoured to the English physician, naturalist and poet Erasmus Darwin (1731-1802); the name of the species is the Latin term “carnea” = meaty, with reference to the colour of its flowers.

The inflorescences, in September-December, are terminal and are formed by 8 to 14 tiny flowers, thickly grouped and pendulous, of tubular shape with five white, 4 mm long, petals, surrounded by ovate bracts with sharp apex, about 3 cm long, of colour varying from pale green to pink-red, forming a sort of protective bell.

The fruits are tiny, indehiscent (which do not spontaneously open when ripe), and woody capsules, containing one seed only. It reproduces with difficulty by seed, which, besides being difficult to find as the species is rather reluctant to fructify, is of difficult germination, but easily by cutting and by grafting, in particular on Darwinia citrodora.

It grows in the origin countries, characterized by a Mediterranean-type climate, in full sun or under slight shade on stony or much draining sandy soils; outside from above, only few specimens confined almost exclusively in botanical gardens do exist.

It is considered at high risk of extinction in the next future, and is, since some years, object of plans of protection and repopulation by the local authorities.