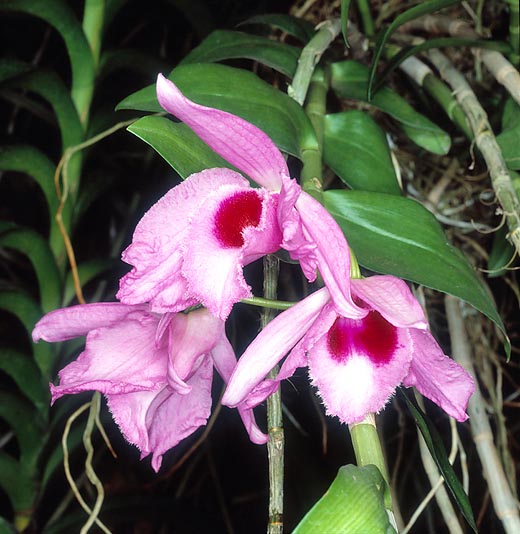 The Dendrobium anosmum is a tropical deciduous epiphyte © Giuseppe Mazza

This species is native to India, Indonesia, Laos, Malaysia, Myanmar, Papua New Guinea, Philippines, Sri Lanka, Thailand and Viet Nam, where it grows as epiphyte on the trees of the semi-deciduous forests up to about 1000 m of altitude, in zones characterized by monsoon climate.

The Dendrobium anosmum Lindl. (1845) is an epiphytic deciduous species with arcuate or hanging stems, knobbly, of 0,5-1,5 m of length and of about 1 cm of diameter and distichous, alternate leaves, oblong with pointed apex, 6-16 cm long and 2,5 cm broad.

The flowers appear at the nodes of the stems after the leaves have fallen, single or coupled, rarely more, have a colour going from the pink to the magenta with labellum purple at base, intensely perfumed, in spite of the name of the species; there is a form with wholly white flowers.

The sepals are lanceolate, 4-5 cm long and 1 cm broad, the petals are oblong, 4-6 cm long and 2 cm broad, undulate, the labellum is ovate with pointed apex, about 3,5 cm long, pubescent, with finely indented margins. It reproduces by seed, in vitro, by division and through the young plants which form after the flowering on the upper and lower nodes which have not carried flowers (in jargon “keiki”, which in Hawaiian means “sons”), which can be removed when they have formed a good radical apparatus.

It is one of the most appreciated species of the genus due to the rich flowering of relative long duration, 2-3 weeks between February and April, when the stems have no leaves, which presents some difficulty of cultivation if the alternation between dry and humid periods simulating what happens in the wild is not respected.

In summer, during the vegetative period, it requires a semi-shaded position, abundant waterings and fertilizations, medium-high temperatures and high atmospheric humidity, 70-85%. 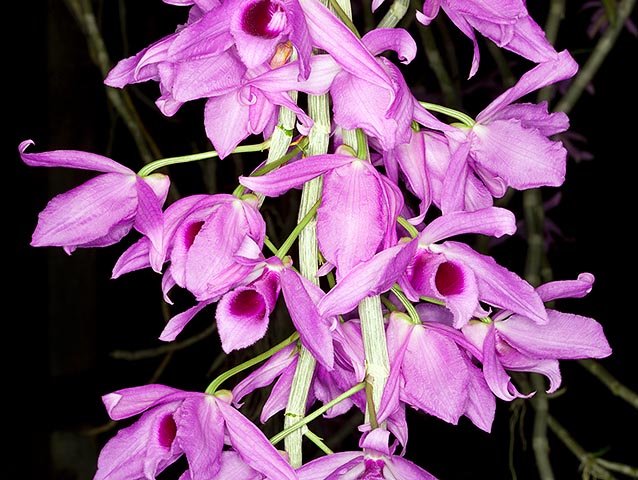 In autumn, when the leaves begin to fall, the waterings are to be reduced almost to suspend them totally, but avoiding to have the stems shrivelling, if needed, in order to avoid this, nebulising them periodically, the luminosity must be high, also with some hours of direct sun by day and the night temperatures to be around the 14-16 °C.

As soon as the new vegetation does appear at the base of the stems, the waterings and the fertilizations are to be progressively resumed.
For the waterings and the nebulisations are to be utilized rainwater, or water obtained by reverse osmosis or demineralised; the fertilizations, duly distributed in way to avoid salts accumulations, are to be done preferably with hydro-soluble balanced products, with microelements, at half dosage than what advised on the package.

It is cultivable preferably on suspended baskets, seen the drooping posture, with draining and well aerated compost which can be formed by a mix of medium sized bark, sphagnum, coir and fragments of charcoal, or mounted on pieces of bark or of branch with sphagnum at the base.