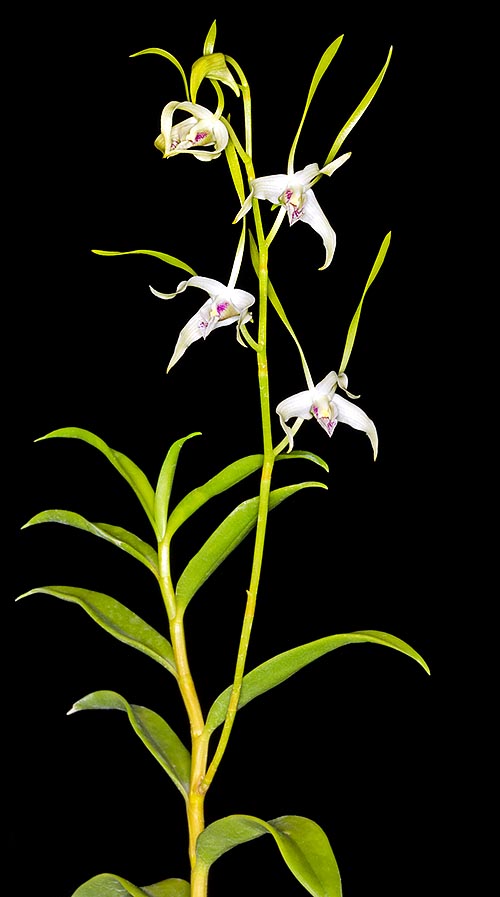 The species is native to the Bismarck Archipelago, Australia (Queensland), Solomon Islands, Moluccas and New Guinea where it grows as epiphyte on the high branches of the trees of the pluvial forests, mostly along the water streams, from the sea level up to about 1000 m of altitude.

The Dendrobium antennatum Lindl. (1843) is an epiphytic species with cylindrical pseudobulbs, swollen at the base, erect, up to 2,5 cm of diameter and 15-60 cm of length in cultivation, even more than one metre in the specimens in nature. The leaves, oblong-lanceolate to ovate-elliptic, are 4-12 cm long and 3-4 cm broad, persistent, alternate, distichous, coriaceous, of pale green colour.

It reproduces by seed, in vitro, micropropagation and division, to be done at the time of the vegetative restart, with each section provided with 3-4 pseudobulbs at least.

Species of great ornamental value due to the characteristic shape of the flowers and their long duration, up to 2 months, slightly perfumed, produced repeatedly during the year under the best cultivation conditions.

It requires a particularly high luminosity, also direct sun in the morning, high temperatures, 25-32 °C in summer, slightly lower in winter, with lowest at night not under the 16-18 °C, and high atmospheric humidity, 60-80%, with good, constant ventilation. The waterings must be abundant during the vegetative period, but allowing the roots to slightly dry up before giving water again; it does not need a precise resting time, but it is good practice to reduce the waterings in winter up to the vegetative restart. For the waterings and the nebulisations it is to be used rainwater, by reverse osmosis or demineralised; the fertilizations, properly distributed and alternated, thus way to avoid salts accumulation at the roots, are to be done during the vegetative period preferably with balanced hydrosoluble products, with microelements, at ½ – ¼ of the dosage suggested on the package.
It may be mounted on bark, trunks, cork rafts or rafts of roots of arborescent ferns, or cultivated in little deep pots or baskets with very draining and aerated compost, which may be formed by bark fragments of medium size with possible addition of inerts to improve the drainage; the repottings are to be done, when necessary, at the time of the vegetative restart.