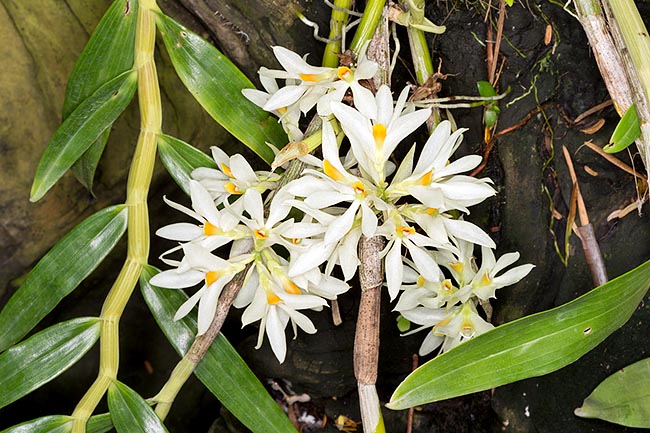 Dendrobium bracteosum is a 10-40 cm epiphyte of the Bismarck, Maluku and Papua New Guinea © Giuseppe Mazza

The species is native to the Bismarck Archipelago, the Maluku Islands and Papua New Guinea, where it grows epiphyte from the sea level, in the mangrove forests, and up to about 600 m of altitude in the pluvial ones.

The name of the genus is the combination of the Greek terms “déndron” = tree and “bios” = life, with reference to the numerous species of the genus living on the trees; the name of the species is the Latin adjective formed by “bractea” = bract, with the suffix “-osus, a, um”, therefore, equipped with bracts, with reference to the long petaloid bracts.

The Dendrobium bracteosum Rchb.f. (1886) is an epiphytic species with cylindrical stems thinned at the base, drooping or erect, 10-40 cm long, covered by a sheath of papery appearance, with oblong-elliptic coriaceous leaves with pointed apex, alternate, 4-9 cm long and 1-2 cm broad, concentrated in the terminal part, of intense green colour.
The inflorescences on the one or more years old leafless pseudobulbs, are compact racemes, on short peduncle, carrying 3-8 or more flowers, waxy, perfumed, of about 2,5 cm of diameter, subtended by an ovate bract with pointed apex longer than the ovary, persistent, which assumes the same colour as the flowers; the sepals and the petals are white, pink or purple, the labellum is reddish orange. The dorsal sepal is lanceolate, 1-2 cm long, the lateral ones are lanceolate-triangular, about 1,2 cm long, merged at the base of the column to form a sort of spur (mentum) 0,8-1 cm long, the petals are obovate-oblong with pointed apex about 1,2 cm long, the labellum is oblong-elliptic with pointed apex, concave, 0,5 cm long, and the column, green, is about 0,5 cm long.

It reproduces by seed, in vitro, micropropagation and by division, with each section provided with 3-4 pseudobulbs. 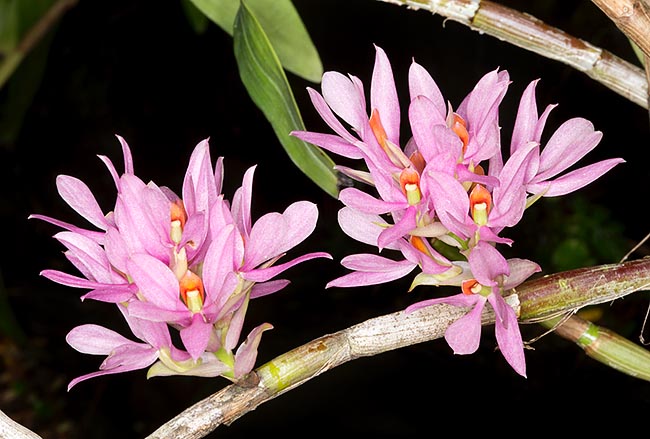 The petals are white, pink or purple, the labellum is reddish orange © Giuseppe Mazza

Species that distinguishes itself due to the long lasting of the flowers on the plant, up to almost six months, requires during the vegetative period high temperatures and humidity, partial shade, abundant and regular watering preferably in the morning, in winter cooler conditions and more spaced watering, with lowest temperatures over the 16-18 °C, even if it is able to bear, completely dry, some degrees less for a very short time; fundamental is a constant good ventilation.

For watering and nebulisations to utilize rain water, by reverse osmosis or demineralised; the fertilizations, duly distributed in way to avoid salts accumulation, are to be done during the vegetative period preferably with hydro-soluble balanced products, with microelements, at half dosage, or less, of what suggested on the package. It can be mounted on bark, trunks, rafts of cork or of roots of arborescent ferns or cultivated in small pots with very draining and aerated compost, which can be formed by bark fragments of medium size. Repotting and possible divisions are to be done when the new roots do appear.
The species is reported in the appendix II of the CITES (species whose trade is internationally ruled).