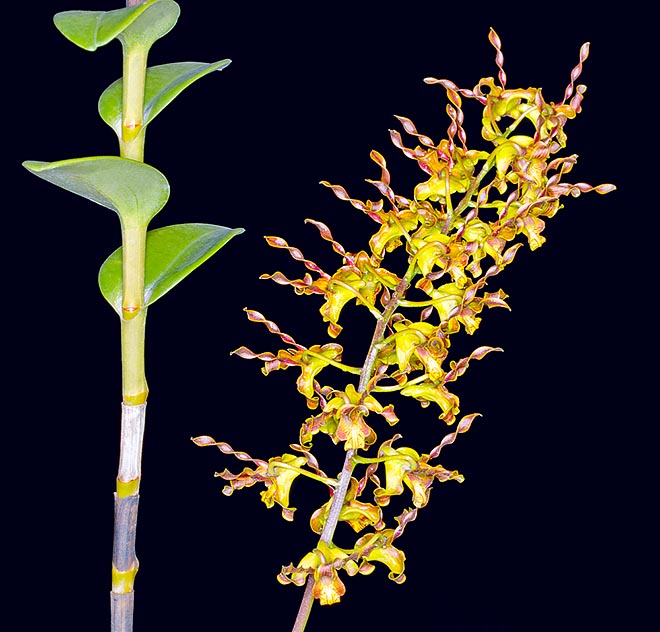 The species is native to New Guinea where it grows as epiphyte on the most exposed branches of the trees in the humid forests close to water streams, up to about 1000 m of altitude.

The name of the genus is the combination of the Greek substantives “δένδρον” (dendron) = tree and “βίος” (bios) = life, with reference to the numerous species of the genus living on the trees; the name of the species is the combination of the Greek substantive “κοχλίας” (cochlias) = snail and of the suffix “-οειδής” (-oeidés), from “εἶδος” (êidos) = shape, look, with reference to the spirally curved petals.

The Dendrobium cochliodes Schltr. (1912) is an epiphytic species with cylindrical pseudobulbs that may exceed the length of 1 m provided in the upper half of alternate leaves, distichous, oblong-elliptic, coriaceous, of glossy pale green colour above, opaque below.

The flowers are long-lasting, 4-6 weeks. 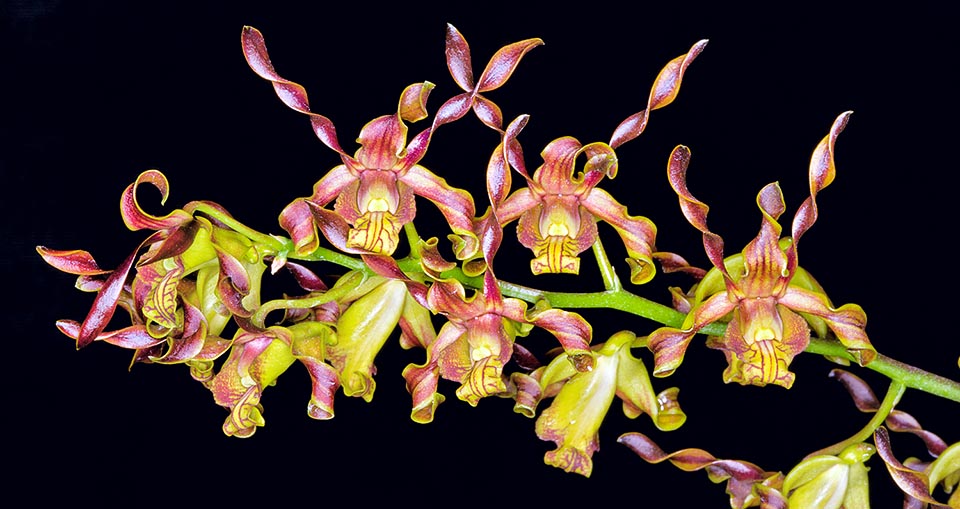 The splendid racemose inflorescences may reach even 40 cm, with 30 4-5 cm flowers, with characteristic spirally twisted petals that have named the species © G. Mazza

Species rare in cultivation, with particularly attractive flowers, requires high luminosity, also some hours of direct sun in the morning, medium-high temperatures in summer, 22-32 °C, slightly lower in winter, with night lowest values not under the 16 °C, high humidity, 70-85%, and constant air movement. Regular waterings during the growth, more spaced in winter until the vegetative restart, using rainwater, demineralised or by reverse osmosis; for the fertilizations, in spring-summer, are preferable the hydrosoluble balanced products, with microelements, at ¼ of the dosage shown on the package. It is usually cultivated in pot or in baskets with aerated and draining compost formed by bark or coir fragments and medium-sliced charcoal. The repottings, when necessary, are to be done by the vegetative restart.