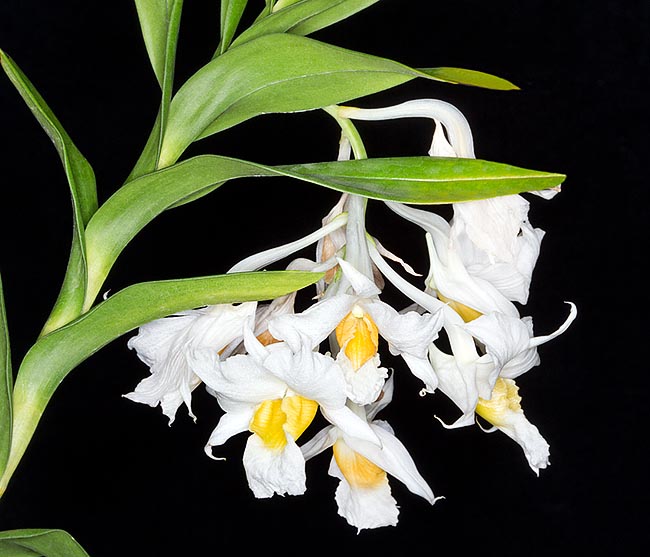 The species is native to Philippines where it grows in the humid forests from the sea level up to about 500 m of altitude.

The name of the genus is the combination of the Greek substantives “δένδρον” (dendron) = tree and “βίος” (bios) = life, with reference to the numerous species of the genus living on the trees; the species was honoured by H.G. Reichenbach to the English colonel Deare, collector of orchids, from whom he had received the plant.

The Dendrobium dearei Rchb.f. (1882) is an epiphytic species with cylindrical erect pseudobulbs, grooved, 0,4-1 m long, provided for almost all their length with persistent alternate leaves, distichous, oblong, 5-12 cm long and 2-4 cm broad, coriaceous, with the foliar base wrapping the pseudobulb covered by blackish down.

Racemose inflorescences from the upper nodes, compact, carrying up to 15 white flowers of 5-7 cm of diameter with a green spot of yellowish green at the base of the labellum.

Ovate sepals with pointed apex, 2,5 cm long and 0,6 cm broad, the two lateral ones merged at the base of the column, form a sort of a spur (mentum) about 1 cm long, ovate petals with obtuse apex, 2,5-3,4 cm long and 2,6 cm broad, trilobed labellum about 3,5 cm long and 2,4 cm broad with small, erect, and ovate median lobe with ruffled margins. The flowers are slightly perfumed and are long-lasting, more than one month.

It reproduces by seed, in vitro, and division, to be done at the vegetative restart, with each section provided of at least 3-4 pseudobulbs. 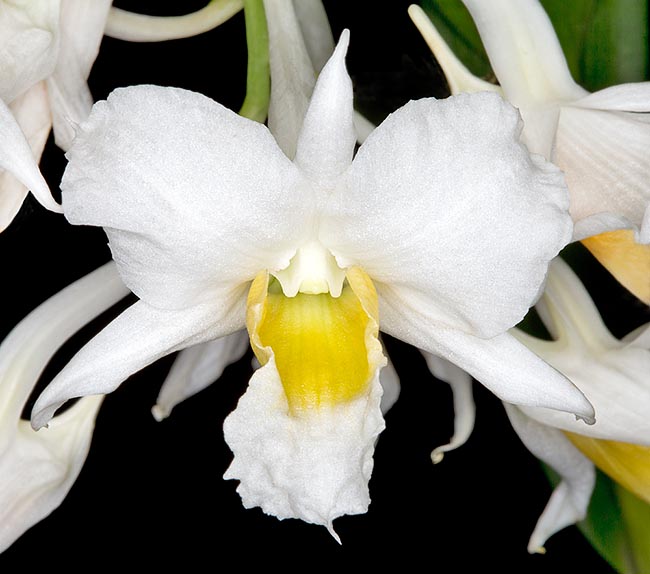 It's budding more times a year, with inflorescences bearing up to 15 long lasting flowers of 5-7 cm of diameter © Giuseppe Mazza

Much appreciated species due to the beauty of its flowers that can produce several times during the year, and of relatively easy to cultivate, nowadays rare in the wild due to the indiscriminate gathering of which has been the subject; has originated some hybrids with white flowers.

The waterings must be abundant during the growth, but allowing the roots to dry up before giving water again, slightly more spaced during the vegetative stasis, ad it does not need a precise resting period.

For the waterings and the nebulisations it is better to use rainwater, demineralised or by reverse osmosis; for the fertilizations, duly alternate with the waterings in order to avoid salts accumulation at the roots, is advisable the use of hydrosoluble balanced products, with microelements, at half the dosage shown in the instructions on the package.

It is cultivable in pot with compost that can be formed by medium sliced bark fragments and charcoal with addition of inerts, such as polystyrene, for an optimal drainage and for favouring the aeration of the roots, or mounted on trunks, bark, cork or arborescent rafts. The repottings are to be done during the vegetative restart when the compost begins to loose its draining properties.