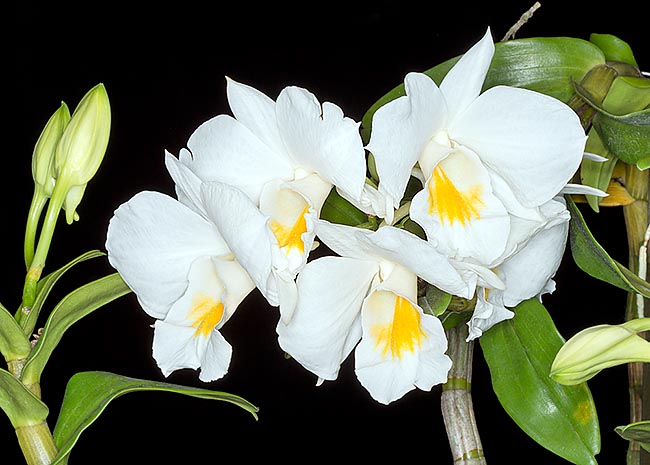 Dendrobium formosum is a South-East Asian epiphyte, well know in cultivation due to the beauty of its big flowers lasting more than one month. Cylindrical 20-45 cm long pseudobulbs and 1-1,5 cm of diameter © Mazza

The species is native to Andaman Islands, Assam, Arunachal Pradesh, Bangladesh, Bhutan, Darjeeling, India, Myanmar, Nepal, Sikkim, Thailand and Vietnam, where it grows in the forests between the 900 and the 2300 m of altitude.

The name of the genus is the combination of the Greek substantives “δένδρον” (dendron) = tree and “βίος” (bios) = life, with reference to the numerous species of the genus living on the trees; the name of the species is the Latin adjective “formosus, a, um” = beautiful, with obvious reference.

The Dendrobium formosum Roxb. ex Lindl. (1830) is an epiphytic species with generally erect, cylindrical, pseudobulbs, 20-45 cm long and of 1-1,5 cm of diameter, thinned at the apex. The leaves are alternate, distichous, oblong-elliptic with obtuse apex, 5-12 cm long and 1-2,5 cm broad, coriaceous, distributed in the upper 2/3 of the pseudobulbs, with tubular foliar base initially covered by a short blackish down. Racemose inflorescences from the upper nodes of the ripe pseudobulbs carrying 1-4 flowers, of 6-11 cm of diameter, white with yellow spot on the labellum; pedicel and ovary are 3,5-5 cm long. Oblong-lanceolate, 4-6 cm long and 1-2,5 cm broad sepals; the lateral ones, merged at the base of the column, form a sort of a conical, about 1 cm long, spur (mentum). Obovate petals with pointed apex and slightly undulated margins, 6 cm long and 3,5 cm broad, trilobed labellum, about 6 cm long and 4 cm broad, with small, erect lateral lobes, and obovate median lobe with retuse apex and undulated margins.
It reproduces by seed, in vitro, division, with each section provided of at least 3-4 pseudobulbs, and through the young plants with at times form in the nodes (in jargon, “keiki”, which in Hawaiian means “sons”), which can be removed when they have formed a good rooting apparatus.

One of the most known and cultivated species due to the beauty of the large flowers intensely perfumed and long lasting, about 5 weeks. It requires high luminosity, also some hours of direct sun in the morning, medium-high temperatures in summer, cooler in winter, with lowest ones included between the 12 and the 15 °C, and high humidity, 60-80%; fundamental is a good and constant ventilation.

The waterings must be regular and abundant during the vegetative period, preferably in the morning so to give the time necessary for drying up, being easily subject to rottenness, spaced in winter, but without excessively wrinkling the pseudobulbs. For the waterings and the nebulisations is to be used rain water, from reverse osmosis or demineralised; the fertilizations, duly distributed so to avoid salts accumulation, are to be done during the vegetative period preferably with hydrosoluble balanced products, with microelements, at ¼ of the dosage suggested on the package. It can be mounted on bark, trunks, rafts of cork or of arborescent ferns roots, or cultivated in small pots or baskets with particularly draining and aerated compost, in order to allow the roots to quickly dry up after each watering, which may be formed by medium sliced bark and charcoal fragments with possible addition of inerts for improving the drainage. Transplants and repottings are to be done when strictly necessary by the vegetatve restart, signalled by the appearance of the new roots.