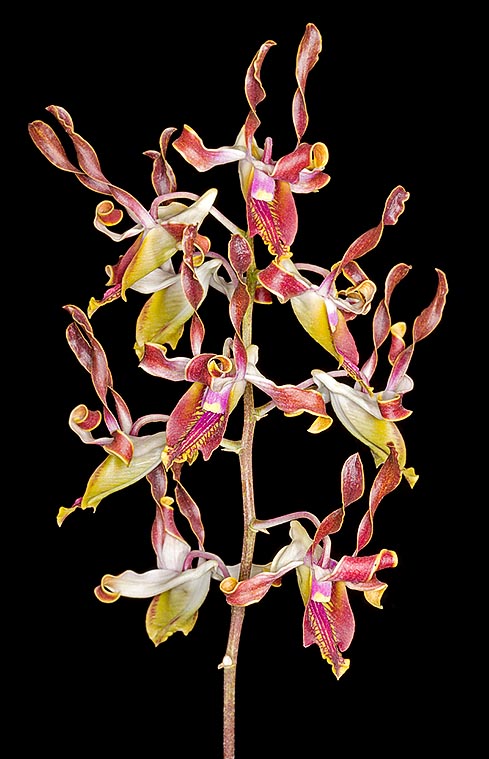 The species is native to New Guinea where it lives as epiphyte on the low trees of the humid forests along the shores of the lakes and water streams, in particular the river Sepik, in a climate characterized by high and constant humidity, at low altitudes.

The Dendrobium lasianthera J.J.Sm. (1932) is an epiphytic species, rather variable in the colour of the flowers, with cylindrical erect pseudobulbs, up to 3 m long in nature, provided for all their length of alternate, distichous elliptic, 3-14 cm long, coriaceous, intense green leaves.

Racemose erect or curved, 30-40 cm long, inflorescences, from the upper nodes of the ripe pseudobulbs, carrying numerous flowers spirally arranged on the rachis, about 7-9 cm long and 6 cm broad.

Linear sepals, undulated and bent backwards, about 4 cm long, white at the base, yellowish brown to brown at the apex; the lateral sepals, merged at the base of the column, form a sort of conical spur (mentum) about 2 cm long. Linear, erect, twisted, about 4 cm long petals, of reddish brown colour with yellow border, labellum trilobed at the apex, about 4 cm long and 2,5 cm broad, of yellowish brown colour with magenta spot at the base and run by three parallel lamellae, obovate central lobe with pointed apex of 1 cm of length.
It reproduces by seed, in vitro, and by division, to be done by the vegetative restart, with each section provided of at least 3-4 pseudobulbs.

Species with particularly attractive flowers and of long duration, more than two months, rare in cultivation, also due to the dimensions which may reach and for the exigencies of heat and humidity, more suitable for being cultivated in open air, where the climate allows this, than in the greenhouses of the enthusiasts. It requires high luminosity, also some hours of direct sun in the morning, high temperatures all the year round, with a minimum value which is good never under the 20-22 °C, and high humidity, 80-90%, with constant ventilation. Waterings must be regular and abundant during the growth of the pseudobulbs, then spaced until the vegetative restart. For the waterings and the nebulisations is to be used rain water, from reverse osmosis or demineralised; the fertilizations, duly distributed in way to avoid salts accumulation, are to be done during the vegetative period preferably with hydrosoluble balanced products, with microelements, at ¼ of the dosage suggested on the package. It is preferably cultivated in pots or baskets with particularly draining and aerated compost, in order to allow the roots to dry up quickly after each watering, which may be formed by medium sliced bark and charcoal fragments with possible addition of inerts to improve the drainage. Transplants and repottings are to be done when strictly necessary by the vegetative restart, signalled by the appearance of the new roots.

The species is reported in the appendix II of the CITES (species whose trade is ruled internationally).