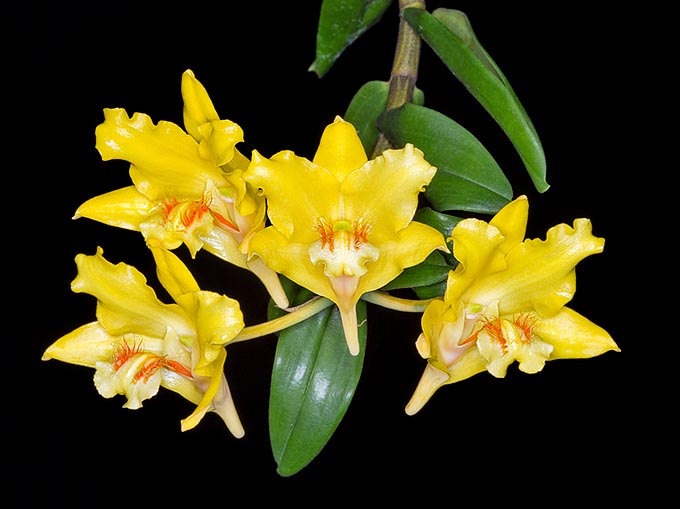 Rare in nature and in cultivation, Dendrobium lowii is an epiphyte native to Borneo © Giuseppe Mazza

The species is native to Borneo (Kalimantan) where it grows as epiphyte on the most exposed branches of the trees of the pluvial forests, between the 700 and the 1000 m of altitude.

The name of the genus is the combination of the Greek substan- tives “δένδρον” (dendron) = tree and “βίος” (bios) = life, with reference to the numerous species of the genus living on the trees; the species is honoured to the English explorer, politician and collector Sir Hugh Low (1820-1905), secretary to Sir James Brooke, Rajah of Sarawak, who found it on a mountain of the north-western coast of Borneo at 900 m of altitude.

The Dendrobium lowii Lindl. (1861) is an epiphytic species with erect cylindrical pseudobulbs, 20-40 cm long, provided in the upper half of persistent alternate leaves, distichous, ovate-oblong with irregularly bilobed apex, 5-8 cm long and 1,5-2,2 cm broad, coriaceous, of dark green colour, with the tubular foliar base wrapping the pseudobulb covered by a blackish down. Racemose inflorescences from the upper nodes, compact, bearing up to 7 flowers of 3-5 cm of diameter of colour variable from pale yellow to golden yellow. 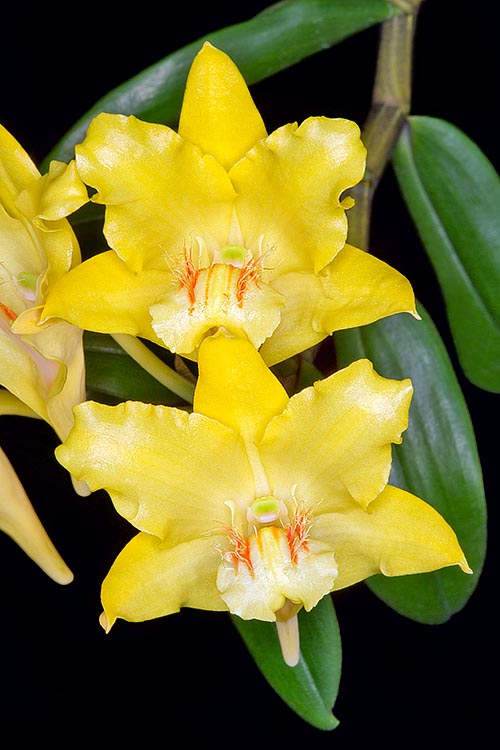 Oblong-lanceolate sepals with pointed apex, the lateral two, merged at the base of the column, form a sort of long spur (mentum), ovate petals with pointed retroflexed apex and undulated margins, trilobed labellum with erect lateral lobes on the sides of the column and roundish median lobe with undulated margins and retuse retroflexed apex, crossed at the centre by 6 orange red lines provided of long fringes. The flowers emit a delicate pleasant perfume and are long lasting, up to 6-7 weeks.

It reproduces by seed, in vitro, micropropagation and division, to be done at the vegetative restart, with each section provided of at least 3-4 pseudobulbs. Species rare in the wild, also due to the deforestation, and in cultivation, among the most ornamental of the genus because of the beauty of its flowers, requires a much luminous exposition, also some hours of sun in the first hours of the morning, medium-high temperatures in summer, 22-30 °C, cooler in winter with lowest night values between the 13 and the 15 °C, high humidity, 75-85%, and a constant air movement.

The waterings must be regular and abundant during the growth of the pseudobulbs, but without stagnations and allowing drying up before giving water again, being easily subject to rottenness, reduced in winter, but without ever having the pseudobulbs too much wrinkled, using also for the nebulisations rain water, by reverse osmosis or demineralised. The fertilizations, during the vegetative time, are to be done using preferably balanced products, with microelements at ¼ of the dosage reported on the package.

It can be cultivated in pot with draining and well aerated compost, in order to allow the roots to quickly dry up after each watering, formed by medium-sliced fragments of bark or of coir with addition of charcoal and possibly of inerts to improve the drainage, or mounted on branches, bark, rafts of cork or of arborescent ferns. The repottings are to be done, when necessary, by the vegetative restart, signalled by the appearance of the new roots.