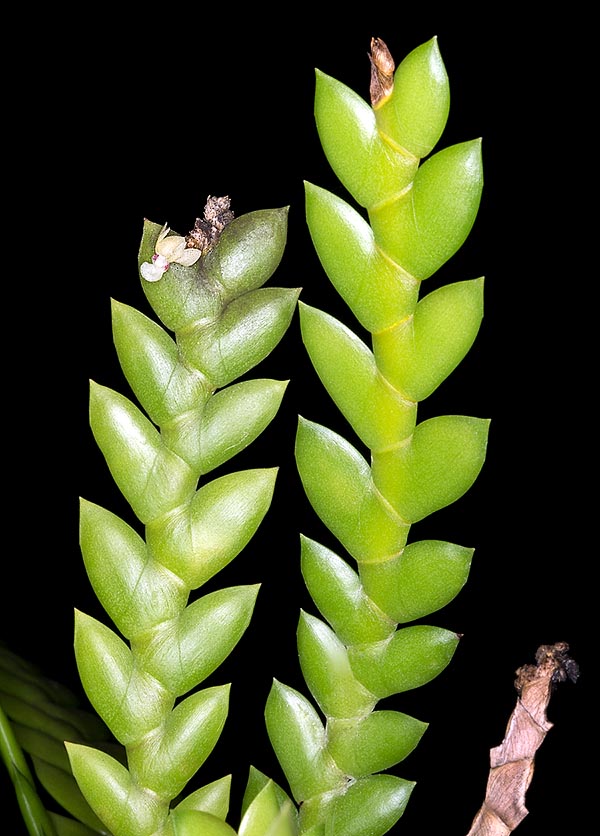 The species is native to the Philippines (Luzon, Mindoro, Leyte and Samar) where it grows on the trees of the rain forests and of mangroves at low altitudes.

The name of the genus is the combination of the Greek substantives “δένδρον” (dendron) = tree and “βίος” (bios) = life, with reference to the numerous species of the genus living on the trees; the species is honoured to the American botanist Elmer D. Merrill (1876-1956), scholar of Philippines flora.

The Dendrobium merrillii Ames (1908) is an epiphytic species with close stems, 12-18 cm long, compressed laterally, provided of alternate leaves, distichous, imbricate, equitant (at a single face with lamina folded in two along the central vein), lanceolate with acute apex, about 1,4 cm long and 0,7 cm broad, of intense green colour, fleshy.

Inflorescences from the apical nodes bearing flowers, of about 4 mm of diameter, of white colour with purple veins on the lateral lobes of the labellum; pedicel and ovary about 5 mm long.

It reproduces by seed, in vitro, and by division, with each section provided of at least 3-4 pseudobulbs, and through the young plants at times generating at the nodes (in jargon “keiki”, that in Hawaiian means “sons”), that can be removed once they have formed a good rooting apparatus.

Frequent waterings during the vegetative period, more spaced in winter in order to grant a light period of rest, utilizing rain water, demineralized or by reverse osmosis. 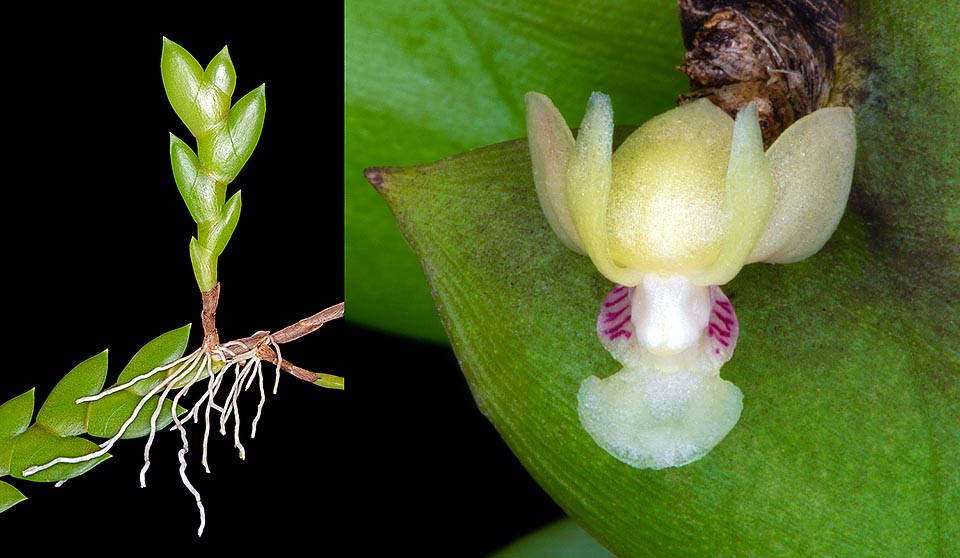 Stems with imbricate leaves folded in two. Left, a “keiki”: the start of a new plant. Right, the tiny 4 mm flower © Giuseppe Mazza

Can be mounted on small logs, pieces of bark or rafts covered by sphagnum, or cultivated in pot or baskets with a draining compost based on medium sliced bark fragments and sphagnum. The species is reported in the appendix II of the CITES (species whose trade is internationally ruled.