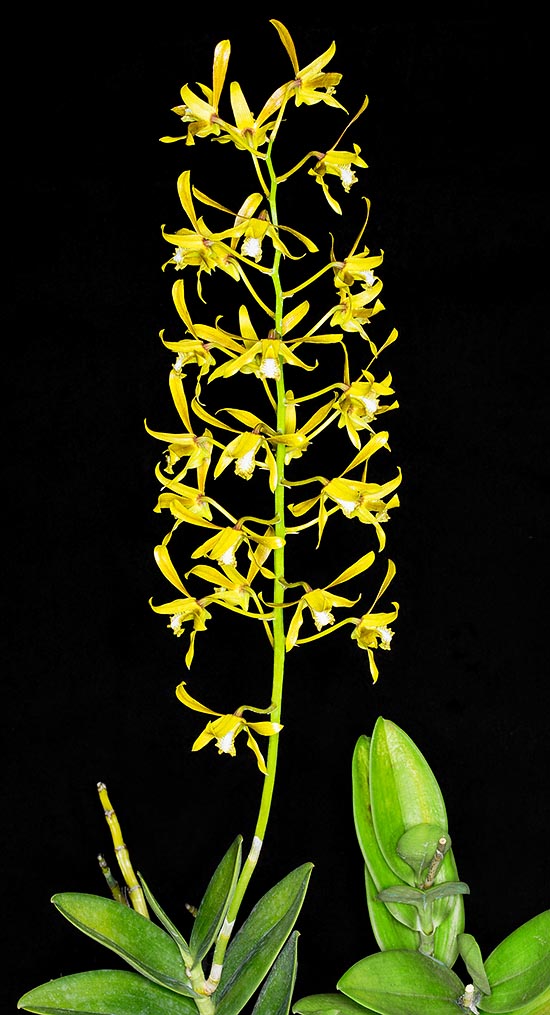 Dendroboium mirbelianum is an epiphyte or lithophyte of mangrove forests, centred around the Indonesian area, with solid erect pseudobulbs even 1,5 m long with 2,5 cm of diameter © Mazza

The species is native to Australia (Qeensland), Bismarck Islands, Moluccas, New Guinea, Solomon Islands and Sulawesi where grows as epiphyte in the coastal forests and in the mangroves or as lithophyte on rocky outcrops at low altitudes.

The name of the genus is the combination of the Greek substantives “δένδρον” (dendron) = tree and “βίος” (bios) = life, with reference to the nuemrous species of the genus living on the trees; the species is the Latin adjective “mirbelianus, a, um” = of Mirbel, homage to the French botanist Charles François Brisseau de Mirbel (1776-1854).

The Dendrobium mirbelianum Gaudich. (1829) is an epiphytic species, less frequently lithophytic, rather variable, with erect cylindrical pseudobulbs, 0,3-1,5 m tall and of 1,5-2,5 cm of diameter, provided in most of its length of alternate leaves, distichous, ovate with bilobed ovate apex, 10-14 cm long and 3,5-6,5 cm broad.

Racemose inflorescences from the upper nodes on long peduncle, erect or arcuate, 0,3-1 m long, bearing 15-40 flowers of greenish yellow colour with pale brown veins and shades. Oblong dorsal sepal with pointed apex, 2-2,6 cm long and 0,7 cm broad, similar lateral sepals, fused at the base of the column to form a sort of conical spur (mentum) 0,7 cm long. Spatulate to oblanceolate petals with pointed apex, 2,5-3,5 cm long and 0,7 cm broad, trilobed labellum, 2,5-3 cm long and 1,5-2 cm broad, with oblong erect lateral lobes on the sides of the column, oblong elliptic median lobe with wavy margin crossed at the base by five parallel crests.

Regarding the flowering, there are two typologies, one self-incompatible, with flowers lasting up to 2 months, the other self-impollinating, with flowers that last no more than 2-3 days or do not open at all (cleistogamy).

It reproduces by seed, in vitro, and division, with each section provided of at least 3-4 pseudobulbs.

Robust species, amply diffused in particular along the coasts of New Guinea, requires high luminosity, even some hours of direct sun light, medium-high temperatures in summer, 24-32 °C, slightly cooler in winter, with lowest night ones preferably not under the 16 °C, high humidity, 70-85%, and constant ventilation.

Regular and abundant waterings during the vegetative period, but allowing the roots to slightly dry up before giving water again, more spaced in winter till the vegetative restart, utilizing rain water, demineralized or by reverse osmosis. For the fertilizations, during the growth of the pseudobulbs, can be utilized a hydrosoluble balanced product, with microelements, at ¼ the dosage shown on the package. Cultivable in pots or baskets with very draining and aerated compound, that can be formed by medium-sliced bark fragments or of coir with possible addition of inerts to improve the drainage, or mounted on bark, trunks, rafts of cork or of roots of arborescent ferns; transplants and repottings are to be done, when strictly necessary, upon the vegetative restart. 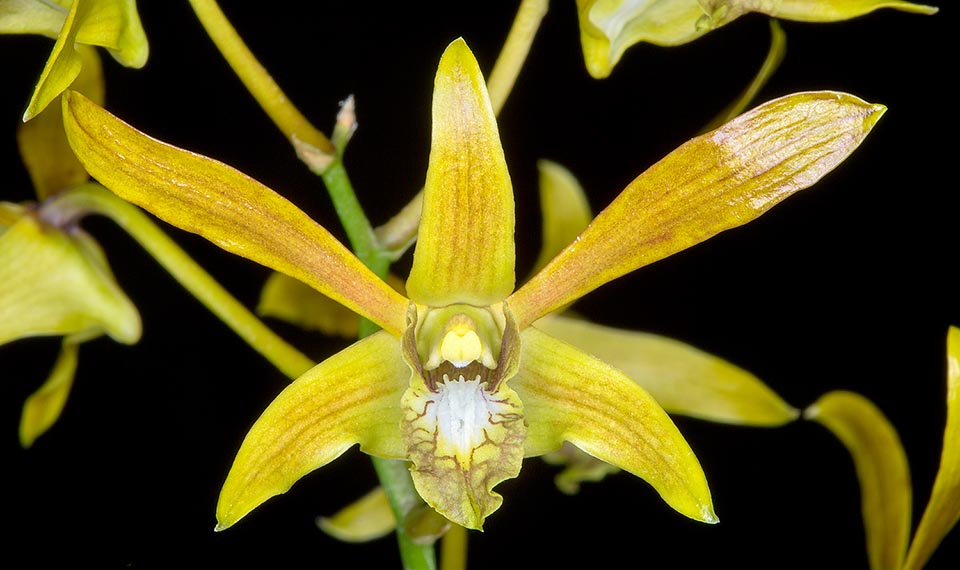 Also 1 m inflorescences with 40 flowers of 7 cm lasting 2 months, but in the cleistogamous form they self-impollinate, living, if opening, 2-3 days only © Giuseppe Mazza