The species is native to Mussau Island in the Bismarck Archipelago, where it lives as epiphyte mainly in the coastal belt on the mangroves or on the trees along the water streams.

The name of the genus is the combination of the Greek substantives “δένδρον” (dendron) = tree and “βίος” (bios) = life, with reference to the numerous species of the genus living on the trees; the name of the species refers to the place of origin.

The Dendrobium mussauense Ormerod (1997) is an epiphytic species with robust cylindrical, erect pseudobulbs, that may reach the length of 2 m, provided with alternate distichous leaves, oblong-elliptic, coriaceous, of pale green colour. Racemose inflorescences from the upper nodes carrying up to 30 flowers, of about 7 cm of diameter, arrange at regular distance on the rachis, of cream colour with violaceous purple venations on the labellum. Oblong-lanceolate sepals with pointed apex, undulated and twisted, the lateral two ones, merged at the base of the column, forms a sort of a short spur (mentum), almost erect, linear-spatulate petals with pointed apex, twisted thrice, trilobed labellum crossed at the base by three lamellae with erect lateral lobes at the sides of the column and roundish median lobe with waved margins. 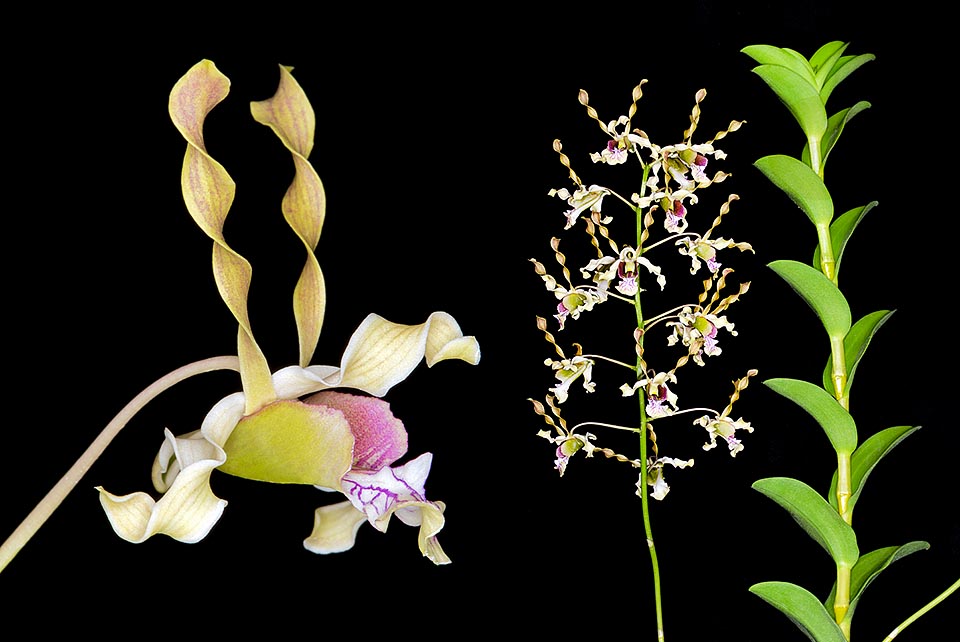 Dendrobium mussauense is an epiphyte recently discovered in the Mussau Island, beloging to the Bismarck Archipelago. Erect, cylindrical pseudobulbs that can reach the 2 m. The inflorescences may carry 30 flowers about 7 cm broad. Species rare in cultivation, but of remarkable interest also as hybrids progenitor © Giuseppe Mazza

Species rare in cultivation, but of remarkable ornamental interest and as progenitor of hybrids, requires high luminosity, also direct sun, high temperatures in summer, 24-32 °C, slightly cooler in winter, with lowest night ones not under the 16-18 °C, high atmospheric humidity, 65-80%, and constant slight air movement in order to prevent fungal attacks. Regular and abundant waterings during the growth of the pseudobulbs, only a little more spaced during the vegetative stasis, using rainwater, demineralised or by reverse osmosis.

It is to be fertilized weekly during the vegetative period preferably with hydrosoluble balanced products, with microelements, at ¼ the dosage suggested by the producer. It is cultivated mounted on branches, bark, pieces of teak or palisander, or in pot with draining and aerated compost formed by medium sliced bark, charcoal or coir fragments with possible addition of inerts to improve the drainage; the repottings are to be done, when the compost has lost its draining characteristics, at the moment of the vegetative restart, advised by the appearance of the new roots.

The species is reported on the appendix II of the CITES (species whose trade is internationally ruled).