As the name suggests, Dendobium mutabile has flowers with changeable colour © G. Mazza

The species is native to Java and Sumatra where it grows in the humid forests between 700 and 2100 m of altitude.

The Dendrobium mutabile (Blume) Lindl. (1830) is an epiphytic species with rather thin fusiform pseudobulbs, erect or drooping, 20 to 30 cm long up to more than 1 m, of green colour tending to reddish if in particularly luminous position, provided of alternate leaves, distichous, oblong-lanceolate with obtuse apex, 6-8 cm long and 1,5-2,5 cm broad. Racemose inflorescences from the apical nodes, compact, bearing 5-16 flowers, of 2,7-3 cm of diameter, with sepals and petals of white colour more or less tinged with pink and violaceous spot at the apex and white labellum with three tubercles of orange yellow colour at the base and violaceous spot at the apex. Ovate sepals with pointed apex, 1,2-1,5 cm long and 0,5 cm broad, oblong petals with wavy margin, of the same length as the sepals and 0,8-1 cm broad, oblong trilobed labellum, about 2 cm long, with emarginate apex and wavy margins.

It reproduces by seed, in vitro, and division, to be done at the vegetative restart, with each section provided of at least 3-4 pseudobulbs.

Floriferous species with particularly delicate flowers of long duration, about 2 weeks, requires luminous position, even some hours of direct sun in the morning, medium-high temperatures, 18-32 °C, slightly lower in winter, with night lowest not under the 10 °C, high humidity, 70-85%, and constant ventilation. Regular and abundant waterings during the growth phase, utilizing rain water, demineralized or by reverse osmosis, spaced in winter to allow a resting period, but without letting the pseudobulbs to wrinkle too much, until the vegetative restart. Fertilizations every two weeks from spring to early autumn with a balanced hydrosoluble product, with microelements, at ¼ the dosage shown on the package. It can be cultivated in pot or baskets, with particularly draining and aerated compost that can be formed by bark fragments and medium sliced charcoal, or mounted on trunks or rafts of cork or of arborescent ferns, with sphagnum at the base of the plant if the cultivation ambient is rather dry. Transplants and repottings are to be done, when necessary, at the vegetative restart. 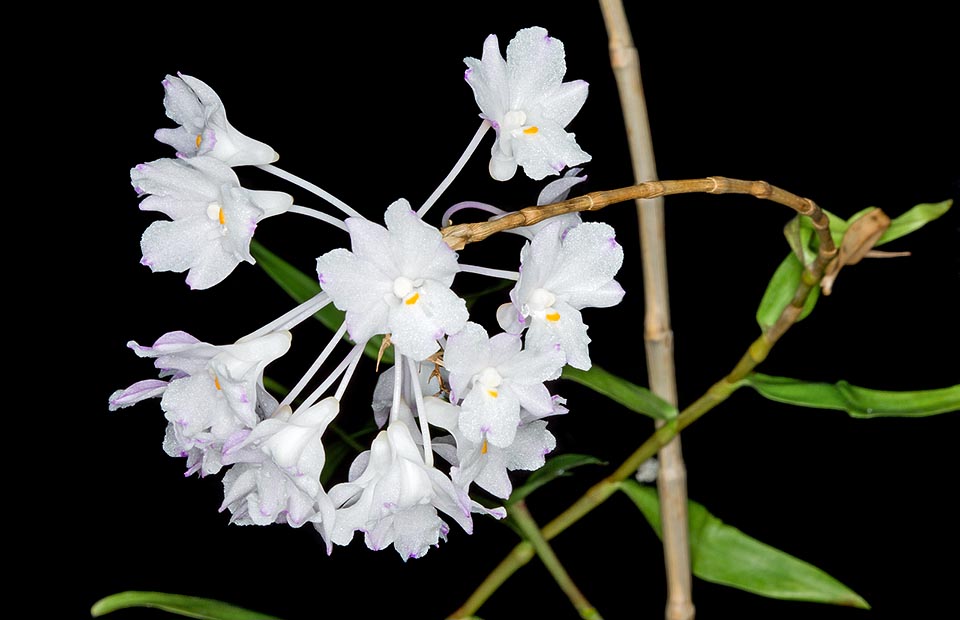 They have about 3 cm of diameter and can last even 2 weeks, merged in inflorescences of 5-16 elements. This nice epiphyte, native to the humid forests of Java and Sumatra, has rather thin fusiform pseudobulbs, erect or drooping, from 20 to 30 cm long to more than 1 m, of green colour tending reddish © Giuseppe Mazza