The species is native to Borneo (Sabah) and Philippines where it grows in the coastal forests and on the margins of water streams up to about 1000 m of altitude.

The name of the genus is the combination of the Greek substantives “δένδρον” (dendron) = tree and “βίος” (bios) = life, with reference to the numerous species of the genus living on the trees; the specific name comes from the Greek adjective “παρθένιος” (parthénios) = virginal.

The Dendrobium parthenium Rchb.f. (1885) is an epiphytic plant with erect pseudobulbs, 35-80 cm long, grooved, provided for almost all their length of alternate leaves, distichous, oblong-ovate with bilobed obtuse apex, 4-5 cm long and 1,5-2,5 cm broad, coriaceous, of pale green colour and glossy above, matt below. Inflorescences from the upper nodes with 1-3, rarely 4, flowers, of 5-6,5 cm of diameter, of pure white colour with a purple pink spot at the base of the labellum. Triangular sepals with pointed apex, the lateral two merged at the base of the column to form a sort of a spur (mentum), ovate petals with pointed apex and slightly waved margins, trilobed labellum with small and erect lateral lobes on the sides of the column and spread median lobe, obovate, with retuse apex and frizzy and wavy edges. 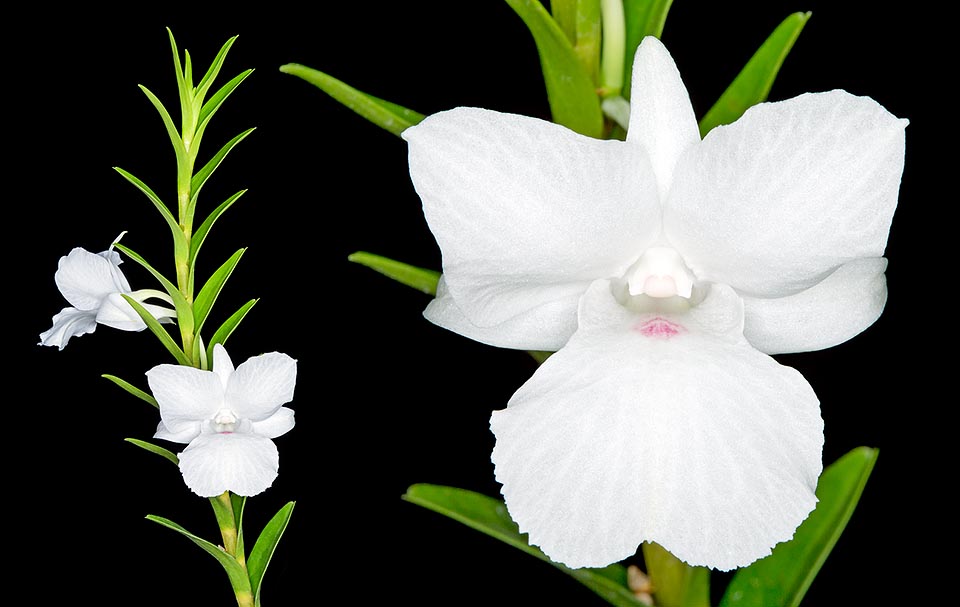 Species known for the beauty of its long lasting flowers, 3-6 weeks, reflowering and of easy cultivation, that has originated various hybrids, requires high luminosity, even some hours of direct sun in the morning, medium-high temperatures in summer, 24-32 °C, slightly cooler in winter, with lowest night values not under the 15 °C, high atmospheric humidity, 70-85%, and constantly moving air. The waterings must be regular and abundant during the vegetative period, but allowing the substratum to partially dry up before watering again, slightly more spaced in winter, utilizing rain water, demineralized or by reverse osmosis. For the fertilizations, during the growth of the pseudobulbs, may be used a hydrosoluble balanced product, with microelements, at half the dosage, or less, than what suggested by the producer, duly alternated by the waterings to avoid salts accumulations at the roots. It can be grown in pot, with particularly draining and aerated compost, that can be formed by medium sliced fragments of bark and charcoal, with possible addition of inerts such as shards, or mounted on trunks, bark, raft of cork or of arborescent ferns roots. The repottings, when necessary, are to be done on the vegetative restart marked by the emission of the new roots.