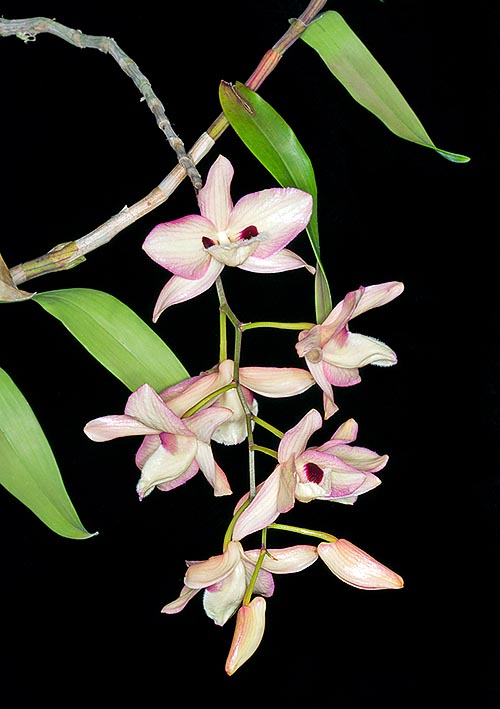 The species is native to Assam, Arunachal Pradesh, Bangladesh, Bhutan, Darjeeling, Laos, Malaysia, Myanmar, Nepal, Sikkim, Thailand and Vietnam where it grows in the deciduous forests up to about 1500 m of altitude.

The name of the genus is the combination of the Greek substantives “δένδρον” (dendron) = tree and “βίος” (bios) = life, with reference to the numerous species of the genus living on the trees; the name of the species is the Latin adjective “pulchellus, a, um” (diminutive of “pulcher”) = pretty, lovely.

The Dendrobium pulchellum Roxb. ex Lindl. (1830) is an epiphytic or lithophytic species with erect cylindrical pseudobulbs, thinned towards the apex, up to 2 m long, and of about 1 cm of diameter, with persistent alternate, distichous, oblong-lanceolate, 5-12 cm long and up to 2 cm broad, glossy green leaves; the sheathing foliar bases are run by purpureal longitudinal lines.

Racemose inflorescences drooping from the upper nodes of the old and new pseudobulbs, up to about 30 cm long, carrying 6-12 flowers of 6-10 cm of diameter. Ovate sepals with pointed apex, yellowish cream to yellowish pink with pink venations, 4-4,5 cm long and 1,5 cm broad; the lateral sepals, merged at the base of the column, form a sort of a short spur (mentum). Oblong petals with obtuse apex, 4-4,5 cm long and 2,5 cm broad, of the same colour as the sepals, obovate to circular labellum, concave, 2,8 cm long and 2,5 cm broad, white nuanced yellow at the base with two reddish brown to dark purple spots on the sides, villous and ciliated towards the apex.

It reproduces by seed, in vitro, division, with each section provided of at least 3-4 pseudobulbs, and through the young plants which at times originate at the nodes (in jargon “keiki”, meaning, in Hawaiian, “sons”), which may be removed when they have formed a good radical apparatus.

Species particularly appreciated due to the beauty of the slightly scented flowers, lasting 10-15 days, produced in the countries of origin between February and April. It requires high luminosity, also some hours of direct sun in winter, intermediate temperatures during the growth period of the pseudobulbs, slightly cooler in winter, with lowest night values not under the 12 °C, humidity 60-80% and good constant ventilation. 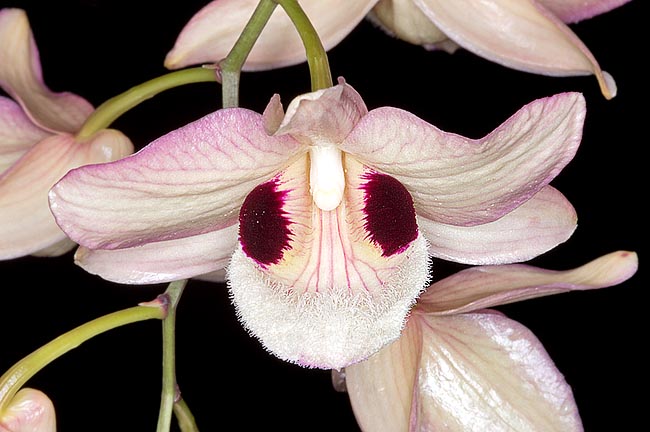 The waterings must be regular and abundant during the growth of the pseudobulbs, spaced in winter till the vegetative restart, to allow a resting period, but without getting them too much wrinkled.

For the waterings and nebulisations is to be used rainwater, from reverse osmosis or demineralised; the fertilizations, duly distributed in way to avoid salts accumulation, are to be done during the vegetative period preferably with hydrosoluble balanced products, with microelements, at ¼ of the dosage suggested on the package.

It can be mounted on bark, trunks, rafts of cork or of arborescent ferns roots, or cultivated in pots or baskets, even suspended, utilizing a particularly draining and aerated compost which may be formed by medium sliced bark and charcoal fragments with possible addition of inerts for improving the drainage. Transplants and repottings are to be done when strictly necessary by the vegetative restart, signalled by the appearance of the new vegetations at the base of the pseudobulbs. The species is reported in the appendix II of the CITES (species whose trade is internationally ruled).