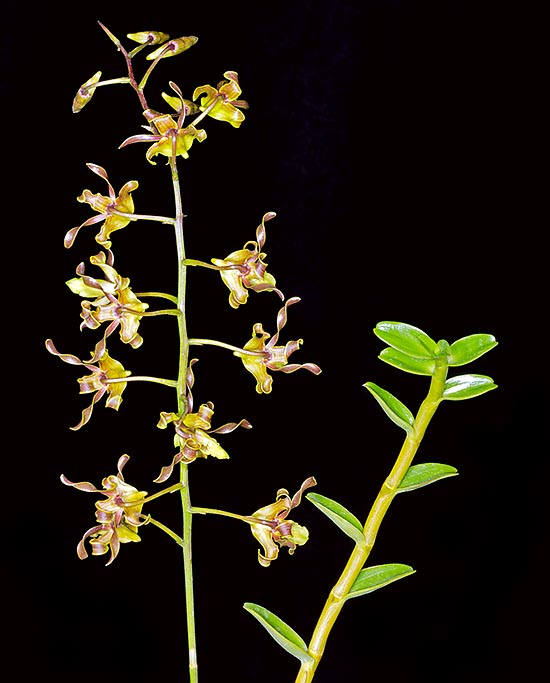 Dendrobium reacieanum is an epiphyte described only in 2003, little known in cultivation © Giuseppe Mazza

The species is native to western New Guinea where it grows in the humid forests at low altitudes.

The name of the genus is the combination of the Greek substantives “δένδρον” (dendron) = tree and “βίος” (bios) = life, with reference to the numerous species of the genus that live on the trees; the species is honoured to Racie, wife of one of the oldest and most famous Indonesian orchid growers, Ayub Parnata, founder of the Indonesian Orchid Society.

The Dendrobium racieanum Cavestro (2003) is an epiphytic species with cylindrical pseudobulbs, up to 60 cm long, and of about 1 cm of diameter, provided with alternate, distichous, elliptic-linear with bilobate apex leaves, up to about 5 cm long and 1,5 cm broad, coriaceous, of glossy dark green colour.

Erect racemose inflorescences from the upper nodes, 18-25 cm long, carrying numerous flowers, of about 2 cm of length and 1,5-2 cm of breadth, with oblong-lanceolate sepals with retroflexed obtuse apex, 1,5 cm long, of yellow colour tinged with brown; the lateral two, merged at the base of the column, form a sort of yellow greenish spur (mentum).

Petals almost erect, linear slightly spatulate, curved, 1,5-2,2 cm long and 0,3 cm broad, of dark brown colour with yellow margins, labellum ovate concave with pointed apex, about 2 cm long and 0,6 cm broad, yellow greenish with pale brown streaks, crossed at the base by three crests. It reproduces by seed, in vitro, and division, to be done at the vegetative restart, with each section provided of at least 3-4 pseudobulbs.

Species described in recent times, and still now almost unknown in cultivation, with tiny long-lasting flowers, about one month, requires high luminosity, even some hours of direct sun in the morning, high temperatures, with lowest values that is good not to go down under the 18-20 °C, and high humidity, 80-90%, with constant air movement. 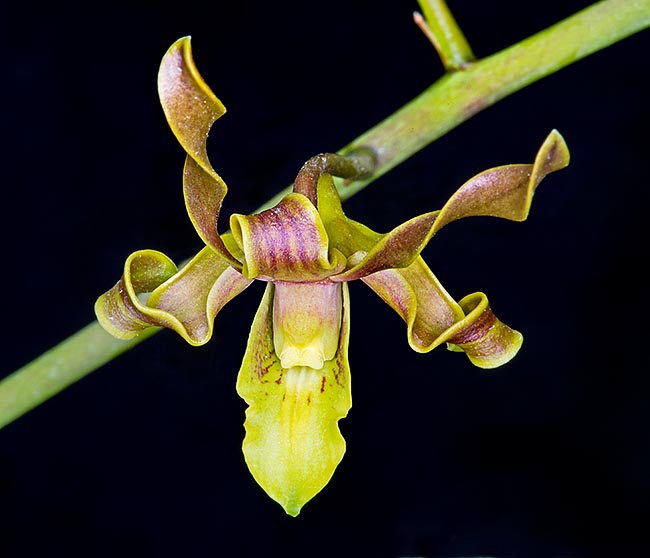 Native to western New Guinea, where it grows in the humid forests at low altitudes. Cylindrical pseudobulbs with alternate leaves that can reach 60 cm of length. 18-25 cm inflorescences and 1,5-2 cm flowers © Giuseppe Mazza

Waterings must be regular and abundant during the growth of the pseudobulbs, but allowing the compost to dry up before giving water again, and then reduced until the vegetative restart.

Waterings and nebulisations are to be done with rain water, by reverse osmosis or demineralised and the fertilizations, during the vegetative period, with preferably balanced hydrosoluble products, with microelements, at half the dosages, or less, than what suggested on the package.

It can be mounted on pieces of bark, trunks, rafts of cork or of arborescent ferns roots, or cultivated in pots and baskets, with draining and aerated compost, to allow the roots to quickly dry up after each watering, that may be formed by medium sliced bark and charcoal fragments, with possible addition of inerts, like pieces of shard or of polystyrene, in order to improve the drainage. Transplants and repottings are to be done, if necessary, at the vegetative restart, signalled by the appearance of the new roots.