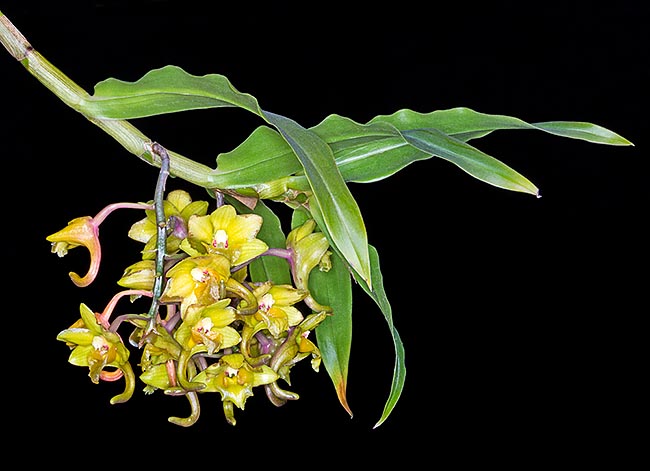 The species is native to Borneo (Sarawak) where it lives on the trees of the humid forests.

Racemose inflorescences drooping from the upper nodes, 5-10 cm long, carrying 5-10 flowers of about 3,5 cm of diameter with elliptic-lanceolate sepals of yellow colour with reddish shades externally; the lateral sepals, merged at the base of the column, form a sort of curved spur (mentum) up to about 3 cm long. The petals, slightly smaller than the sepals, are yellow, the labellum is trilobed with erect lateral lobes and ovate central lobe, 1,5 cm broad, with a thickening at the centre and margins slightly fringed. It reproduces by seed, in vitro, and division, to be done by the vegetative restart, with each section provided of at least 3-4 pseudobulbs.

Species rare in cultivation characterizing for the long curved spur of the flowers, odourless, and lasting 10-12 days. 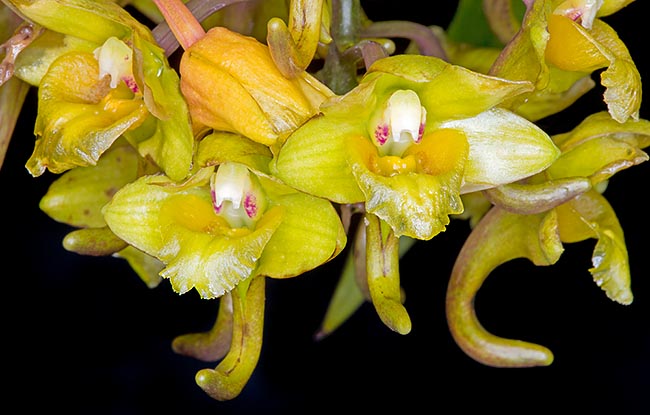 For the waterings and the nebulisations is to be used rainwater, from reverse osmosis or demineralised; the fertilizations, properly distributed in way to avoid salts accumulation at the roots, are to be done only during the vegetative period preferably with hydrosoluble balanced products, with microelements, at ½ - ¼ of the dosage suggested on the package.

It can be mounted on bark, trunks, rafts of cork or of arborescent ferns roots, or cultivated in pots or baskets, also suspended, utilizing a particularly aerated and draining compost which may be formed by medium sliced bark and charcoal fragments with possible addition of inerts for favouring the drainage. Transplants and repottings are to be done when strictly needed at the vegetative restart, signalled by the appearance of the new roots.

The species is reported in the appendix II of the CITES (species whose trade is ruled internationally).