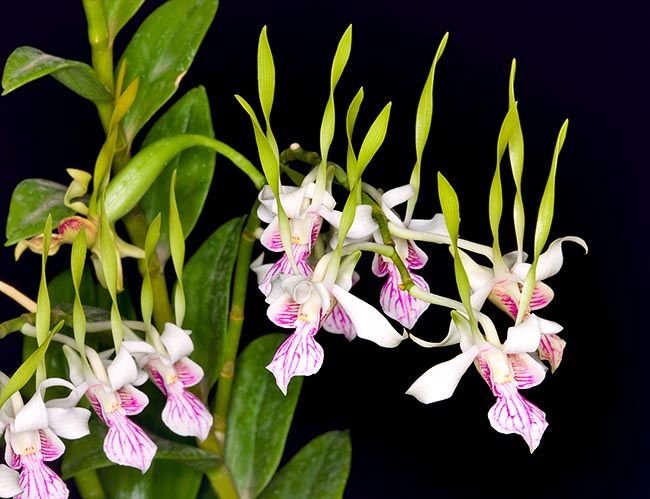 Dendrobium stratiotes: epiphyte with stems which may exceed 150 cm and 2 cm of diametre © Giuseppe Mazza

The species is native to the Lesser Sunda Islands, Maluku Islands and Sulawesi, where it grows in the low altitudes humid forests.

The Dendrobium stratiotes (Rchb.f. (1886) is an epiphytic species with cylindrical stems which may reach and exceed the 1,5 m of length with 2 cm of diameter, the leaves are persistent, ovate, rigid, alternate and distichous, up to 8 cm long and 2 cm broad. Lateral inflorescences from the upper nodes of the ripe pseudobulbs, 8 to 35 cm long, more or less erect, carrying up to 15 waxy flowers 8-10 cm long.

The dorsal sepal is ovate-triangular, 3,5 cm long, of ivory white colour with greenish shades at the apices, as the lateral ones, curved and waved, 4,5 cm long, and united at the base of the column forming a sort of a spur (mentum), 1,5 cm long.

The petals are linear with pointed apex, erect and twisted, almost parallel, 6 cm long and 0,3 cm broad, of greenish colour; the labellum is trilobed, 4 cm long and 2 cm broad, pure white with violet striae, erect lateral lobes and cordate median lobe, with pointed apex; the flowers are much long-lasting, even of some months.

It reproduces by seed, in vitro, micropropagation and by division, to be done at the vegetative restart, with each section provided with at least 3-4 pseudobulbs. 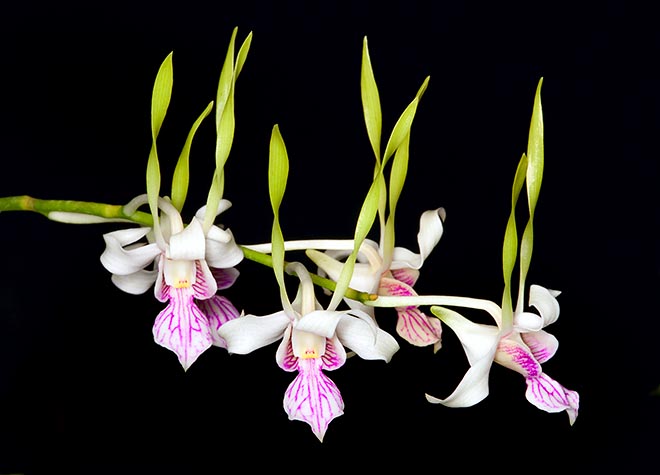 The 6 cm long green petals are linear and pointed. The trilobed labellum is white with violet striae © Giuseppe Mazza

Relatively little cultivated, but widely utilized in the hybridizations, it should deserve a greater diffusion amongst the lovers due to the particularly long-living typical flowers, it requires medium-high temperatures with lowest temperatures in winter not less than 15 °C, even if can stand some degree less for a short time and being dry, medium-high humidity, 50-70%, high luminosity and good ventilation.

It does not have a precise resting period; the waterings must be frequent and abundant, allowing drying partially, with a slight reduction in winter till the vegetative restart in spring.

For the waterings and nebulisations is to be utilized rain water, or water obtained through reverse osmosis, or demineralised; the fertilizations, duly distributed in way to avoid salts accumulation, are to be done during the vegetative period preferably with hydrosoluble balanced products, with microelements, at a ¼ of the dosage suggested on the package.

It can be mounted on bark, trunks, cork or arborescent ferns roots rafts, or cultivated in little deep pots or baskets with much draining and aerated compost, which may be formed by medium sliced bark fragments with the possible addition of inerts in order to improve the drainage; the repottings are to be done at the vegetative restart.