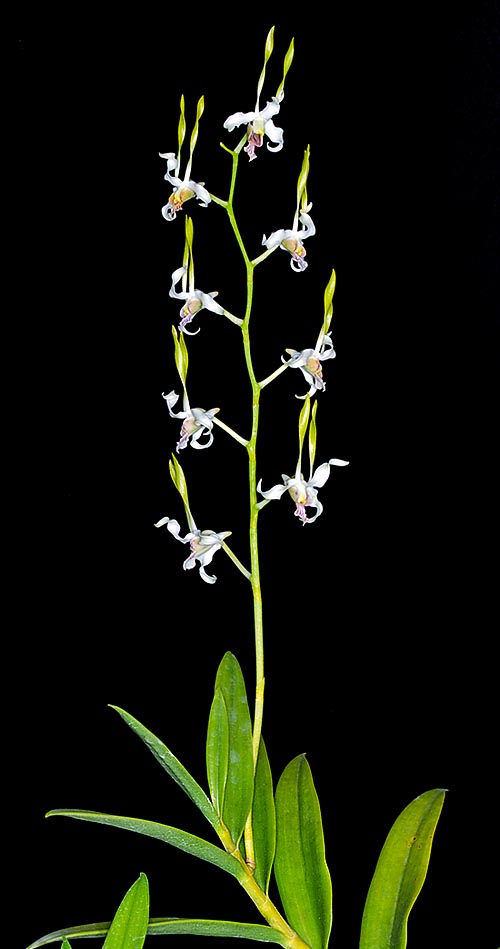 The species is native to the Moluccas (Halmahera) where it lives in the humid forests at low altitudes.

The name of the genus is the combination of the Greek substantives “δένδρον” (dendron) = tree and “βίος” (bios) = life, with reference to the numerous species of the genus living on the trees; the name of the species is the combination of the Greek verb “στρεβλόω” (strebloo) = to twist and of the substantive “κέρας” (keras) = horn, with reference to the twisted petals.

The Dendrobium strebloceras Rchb.f. (1886) is an epiphytic species, rather variable for the colour of the flowers, with erect cylindrical pseudobulbs thinned towards the apex, 50-90 cm long, and alternate, distichous, oblong-lanceolate with pointed apex, coriaceous, intense green, leaves.

Racemose inflorescences from the upper nodes, 30-50 cm long, erect or arcuate, carrying 5-12 flowers of about 8 cm of length and 3 cm of breadth.

White, greenish white or pale yellow eventually suffused of brown or violet sepals, bent backwards, the lateral sepals, merged at the base of the column, form a sort of a spur (mentum).

More or less erect, twisted, 3,5-4,5 cm long petals, of the same colour as the sepals, trilobed labellum, 3 cm long, white or pale yellow with violaceous purple venations, with erect lateral lobes and median lobe with undulated margins.
It reproduces by seed, in vitro, and division, to be done by the vegetative restart, with each section provided of at least 3-4 pseudobulbs.

It requires a partially shaded exposition, medium-high temperatures, 24-33 °C during the growth of the pseudobulbs, then slightly cooler, with minimum ones not under the 15 °C, till the vegetative restart, and high humidity, 70-80%; fundamental is constant ventilation.

Until completion of the growth of the pseudobulbs the waterings must be regular and abundant, but leaving to dry almost completely before giving water again, then more spaced, but without getting the pseudobulbs too much wrinkled.

The waterings and nebulisations are to be done with rainwater, from reverse osmosis or demineralised, and the fertilizations, duly distributed in order to avoid salts accumulation at the roots, with hydrosoluble balanced products, with mcroelements, at ½ - ¼ of the dosage suggested on the package, exclusively during the vegetative period. It can be mounted on bark, trunks, rafts of cork or of arborescent ferns roots, or cultivated in pots or baskets utilizing particularly draining and aerated compost which may be formed by medium sliced bark and charcoal fragments with the addition of inerts for a better drainage. 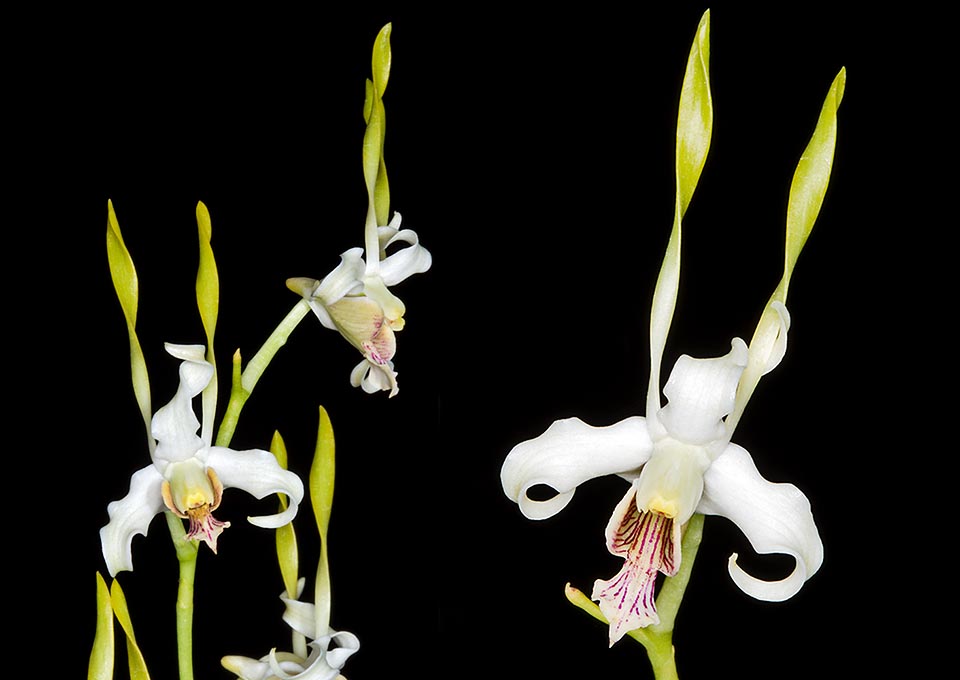 Rare in cultivation, it is a 50-90 cm tall epiphyte with inflorescences that may reach 50 cm with 12 flowers about 3 cm broad and 8 cm long © Giuseppe Mazza

Transplants and repottings are to be done when strictly necessary by the appearance of the new roots signalling the vegetative restart. The species is reported in the appendix II of the CITES (species whose trade is internatonally ruled).