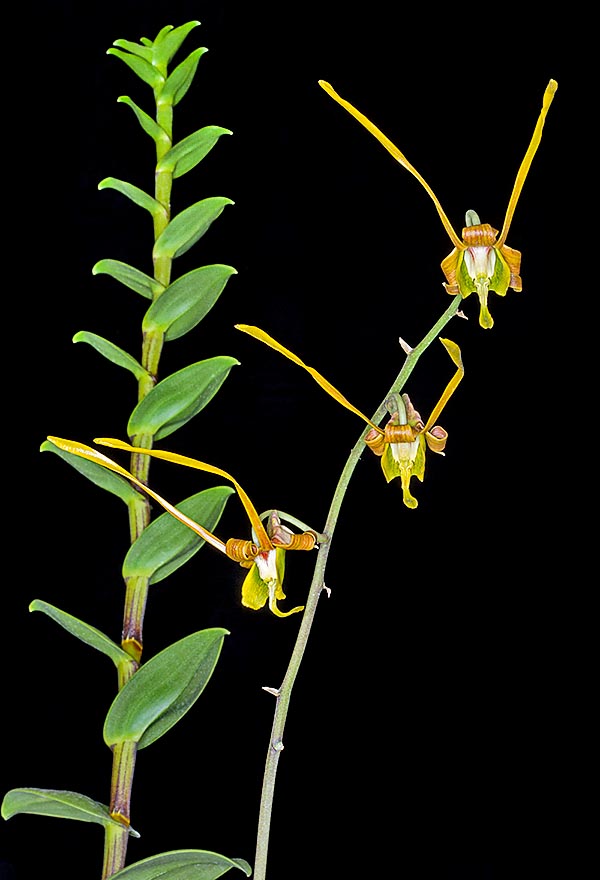 The species is native to New Guinea where grows on the trees of the humid forests at low altitudes.

The name of the genus is the combination of the Greek substantives “δένδρον” (dendron) = tree and “βίος” (bios) = life, with reference to the numerous species of the genus living on the trees.

The species is honoured to the Indonesian agriculturist and collector Sutikno, who has introduced it in cultivation.

Linear twisted greenish brown or yellowish brown sepals, the lateral ones, merged at the base of the column, form a sort of a conical spur (mentum).

Recently described species and still rare in cultivation, it distinguishes due to the attractive long lasting flowers, 7-9 weeks, the particularly long erect petals and the labellum with thin median lobe; requires high luminosity, also some hours of direct sun light, averagely high temperatures, 24-32 °C, during the whole year, with lowest night values not under the 16-18 °C during the vegetative stasis, high humidity, 70-85%, and constant movement of the air. 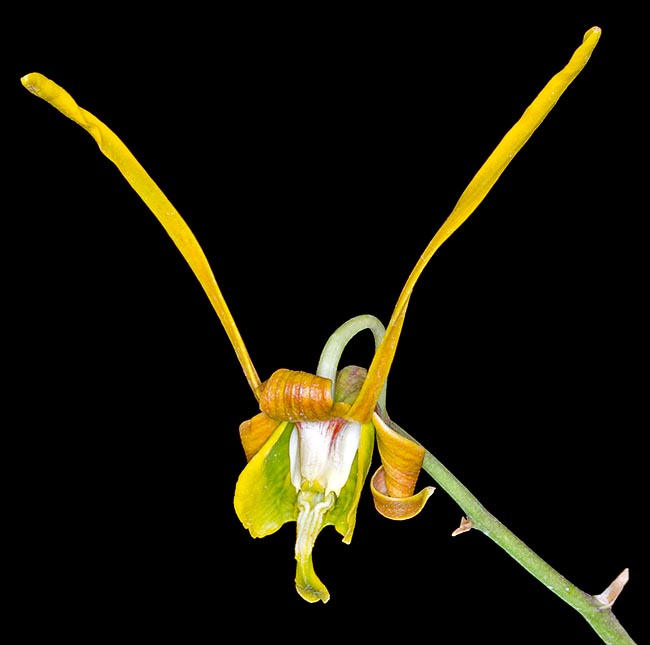 The cylindrical and thin pseudobulbs can be one metre and a half long. The inflorescences carry even 15 flowers about 8 cm long and 3,5 cm broad lasting 7-9 weeks, but is still very rare in cultivation © Giuseppe Mazza

The waterings must be regular and abundant in the period of growth of the pseudobulbs, and then reduced till the vegetative restart, but without leaving dry the substratum for long time.

The waterings and the nebulisations are to be done with rainwater, from reverse osmosis or demineralised.

For the fertilizations, duly distributed and alternated, in way to avoid salts accumulation at the roots, to be done exclusively during the vegetative period, are to be used preferably hydrosoluble balanced products, with microelements, at ½ - ¼ of the dosage shown on the package.

It can be mounted on bark, trunks, rafts of cork or of arborescent ferns roots, or cultivated in pots or baskets with particularly draining and aerated compost, to allow the roots to quickly dry up after each watering, that may be formed by medium sliced bark and charcoal fragments with possible addition of polystyrene or earthenware, for improving the drainage; the repottings are to be done, when necessary, by the vegetative restart, signalled by the appearance of the new roots.