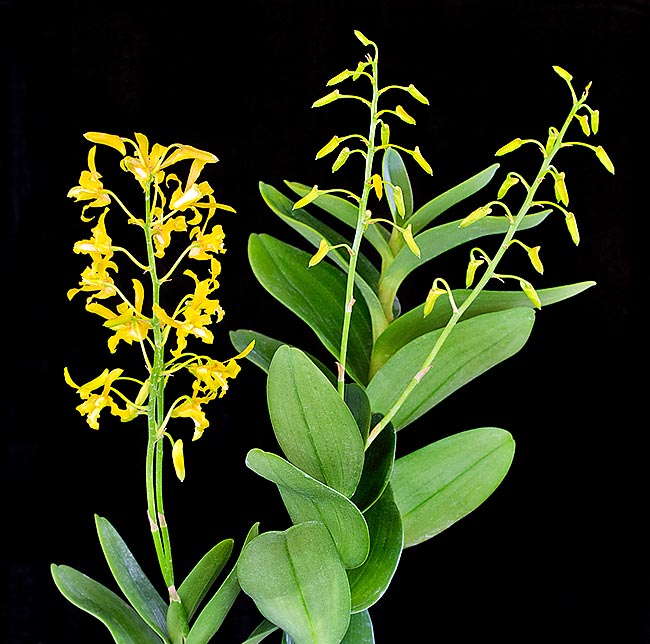 Dendrobium sylvanum is an epiphyte with even 120 cm long erect pseudobulbs at home, at low altitude, in the humid forests of Bismarck Archipelago, Solomon Islands, New Caledonia and New Guinea © Giuseppe Mazza

The species is native to the Bismarck Archipelago, New Caledonia, New Guinea and Solomon Islands, where it grows in the humid forests at low altitudes.

The name of the genus is the combination of the Greek substantives “δένδρον” (dendron) = tree, and “βίος” (bios) = life, with reference to the numerous species of the genus living on the trees; the name of the species is the Latin adjective “sylvanus, a, um” = sylvan, of the woods, with obvious reference.

The Dendrobium sylvanum Rchb.f. (1876) is an epiphytic species with cylindrical erect pseudobulbs, slightly thinned at the apex and at the base, up to about 1,2 m long and of 1-1,5 cm of diameter, provided in the upper half of alternate, distichous, oblong-ovate with bilobed apex, up to 12 cm long and 4 cm broad in the median part, coriaceous, of intense glossy green colour leaves.

Recemose inflorescences from the upper nodes, erect, up to 50 cm long, carrying numerous greenish yellow flowers with more or less intense purple brown striations, of 5-6 cm of diameter, oblong-linear sepals with slightly undulated margin, 2,4 cm long, with retroflexed apices, the lateral sepals, merged at the base of the column, form a sort of a spur (mentum) about 0,7 cm long.

Obovate-spatulate petals, about 3 cm long and 0,7 cm broad, trilobed labellum, 2,4 cm long and 1 cm broad, with oblong erect lateral lobes with toothed margin and oblong median lobe with pointed apex and undulated margins, run at the base by three white parallel lines; the flowers are long lasting, 6-9 weeks. It reproduces by seed, in vitro, and division, to be done by the vegetative restart, with each section provided of at least 3-4 pseudobulbs. 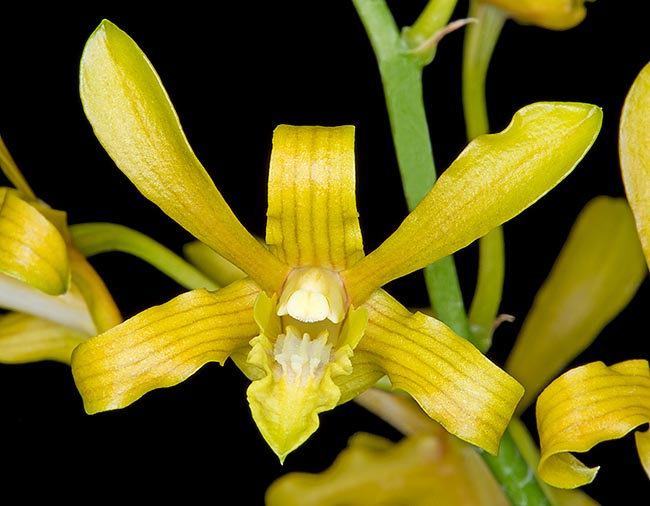 During the vegetative period the waterings must be regular and abundant, but allowing to dry up before giving water again, then slightly more spaced, but without wrinkling the pseudobulbs, till the vegetative restart. To be used for the waterings and nebulisations rainwater, from reverse osmosis or demineralised; the fertilizations, duly distributed in order to avoid salts, are to be exclusively done during the vegetative period preferably with hydrosoluble balanced products, with microelements, at ½ - ¼ of the dosage suggested on the package.

Cultivable in pots or baskets with particularly draining and aerated compost which may be formed by a mix of medium sliced bark, coir and fragments of charcoal, with possible addition of inerts to improve the drainage, or mounted on bark, trunks, rafts of cork or of arborescent ferns roots.

Transplants and repottings are to be done when strictly necessary by the vegetative restart, signalled by the appearance of the new vegetations.