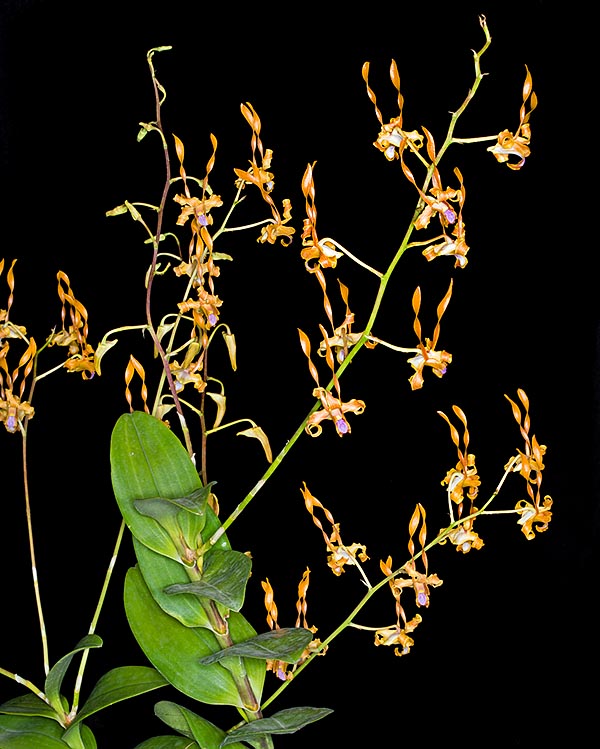 Dendrobium tangerinum is a species of north-eastern New Guinea where it grows epiphyte on the trees and as lithophyte on rocky slopes, from the sea level up to about 1800 m of altitude © Giuseppe Mazza

The species is native to north-eastern New Guinea where it grows as epiphyte on the trees or as lithophyte on rocky slopes, from the sea level up to about 1800 m of altitude.

The name of the genus is the combination of the Greek substantives “δένδρον” (dendron) = tree and “βίος” (bios) = life, with reference to the numerous species of the genus living on the trees; the name of the species is the Latin adjective “tangerinus, a, um” = tangerine, of orange red colour, with obvious reference.

The Dendrobium tangerinum P.J.Cribb (1980) is an epiphytic or lithophytic species with erect cylindrical pseudobulbs, 30-70 cm tall, provided in the upper half of alternate leaves, distichous, oblong-elliptic, up to about 10 cm long and 3 cm broad, coriaceous, of pale green colour.

Racemose inflorescences from the upper nodes, erect, 25-45 cm long, bearing numerous flowers, of 4,5-6 cm of diameter, with linear sepals having pointed apex of orange yellow colour run by brown reddish stripes, 2-3 times twisted; the lateral sepals, merged at the base of the column, form a sort of a spur (mentum).

Linear petals with pointed apex, erect and twisted, of orange red to reddish brown colour, orange yellow trilobed labellum with erect lateral lobes at the sides of the column and oblong median lobe, run at the base by three violaceous lamellae, with retroflexed apex.

It reproduces by seed, in vitro, division, to be done by the vegetative restart, with each section provided of at least 3-4 pseudobulbs, and through the young plants which possibly form at the nodes (in jargon, “keiki”, meaning in Hawaiian “sons”), that can be removed when they have formed a good radical apparatus.

Species whose population in nature has drastically reduced to the indiscriminate gathering due to the particular shape and colour of its flowers of long duration, 6-7 weeks, and which has originated various hybrids. 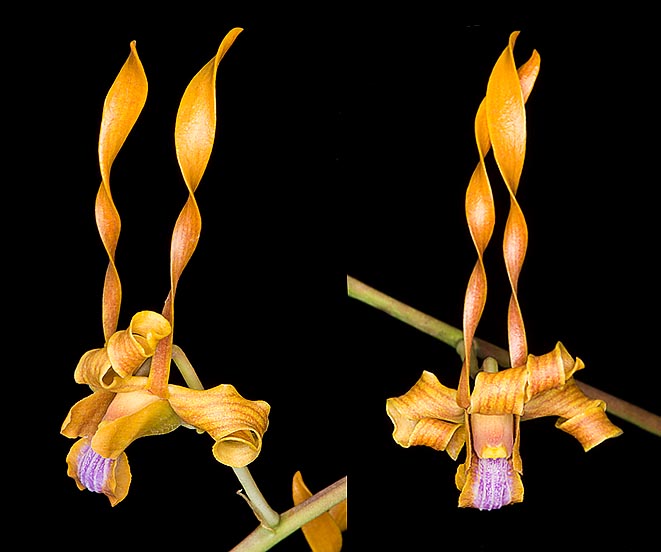 The population in nature has drastically reduced due to the indiscriminate gathering for the particular shape and colour of its splendid flowers, here seen from the side and the front, lasting even seven weeks © Giuseppe Mazza

The waterings must be regular and abundant during the growth of the pseudobulbs; even if not needing a precise resting period, it is good to slightly reduce the waterings in winter until the vegetative restart.

For the waterings and nebulisations is to be used rainwater, from reverse osmosis or demineralised; the fertilizations, duly distributed and alternated, in way to avoid salts accumulation at the roots, are to be done during the vegetative period preferably with hydrosoluble balanced products, with microelements, at ¼ of the dosage suggested on the package.

It can be mounted on bark, trunks, rafts of cork or of arborescent ferns roots, or cultivated in pots or baskets with very draining and aerated compost, that may be formed by medium sliced bark fragments, pieces of charcoal or by a mix of both, with possible addition of inerts for improving the drainage. The roots do not like to be disturbed; therefore transplants and repottings are to be done when strictly necessary at the vegetative restart.