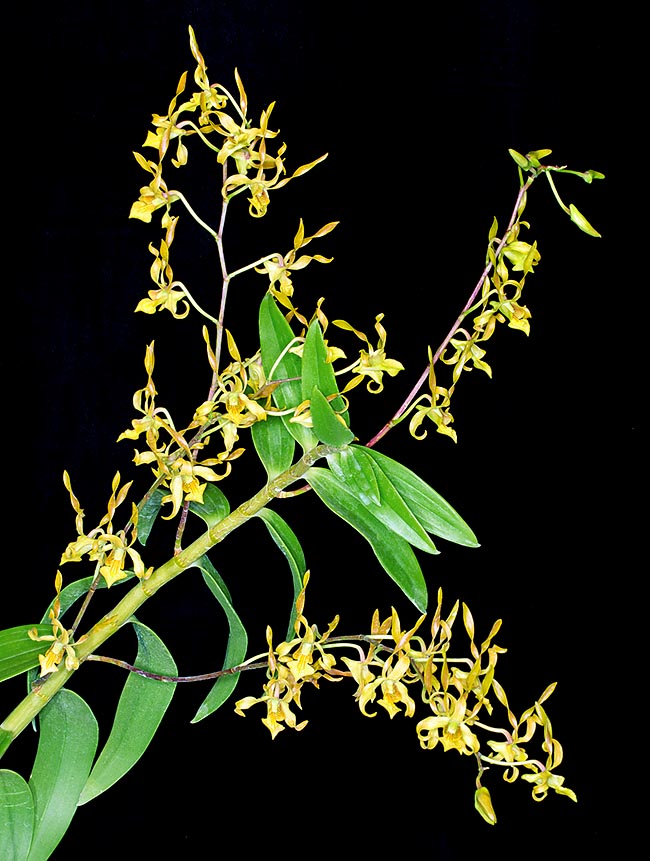 Dendrobium trilamellatum is an epiphyte, rarely lithophyte of Australia (Queensland and Northern Territory) and of southern New Guinea, where grows in savannas and swamps up up about 300 m of altitude © Giuseppe Mazza

The species is native to Australia (Northern Territory and Queensland) and to southern New Guinea where it grows in the savannas and swamps as epiphytic, often on the trunks and branches of Melaleuca sp., up to about 300 m of altitude.

The name of the genus is the combination of the Greek substantives “δένδρον” (dendron) =tree and “βίος” (bios) = life, with reference to the numerous species of the genus living on the trees; the name of the species is the combination of the Latin prefix “tri-” = three and of the adjective “lamellatus, a, um” = provided of lamellae, with reference to the three lamellae present at the base of the labellum.

The Dendrobium trilamellatum J.J.Sm. (1908) is an epiphytic, rarely lithophytic, species, with cylindrical erect pseudobulbs, slightly enlarged near the base, 20-60 cm long and up to about 2 cm of diameter, provided in the upper half of alternate, disticous, linear-lanceolate leaves, 10-20 cm long and 1-1,5 cm broad, coriaceous, of glossy intense green colour.

Racemose inflorescences from the upper branches usually erect, 35-40 cm long, bearing up to 15 flowers of 4-6 cm of length and of 3,5-5 cm of breadth, of brown yellow colour with darker venations.

Linear sepals with pointed apex twisted, 2-3 cm long, the lateral two, merged at the base of the column, form a sort of spur (mentum), linear petals with pointed apex, erect and twisted, 3-3,5 cm long and 0,3-0,6 cm broad, trilobed labellum, 1,5-2,5 cm long and 0,8-1,5 cm broad, with erect lateral lobes on the sides of the column and almost triangular median lobe with pointed apex, run for almost all its length by three parallel and prominent lamellae. It reproduces by seed, in vitro, and division, to be done by the vegetative restart, with each section provided of at least 3-4 pseudobulbs. 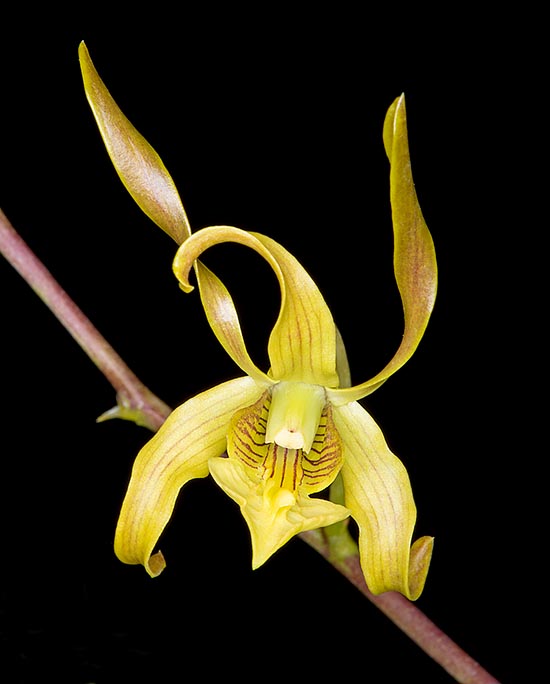 Fairly distributed species in its origin places, less in cultivation, with the flowers pleasantly and intensely perfumed and long-lasting, 6-8 weeks, requires high luminosity, also some hours of direct sun, high temperatures in summer, 25-35 °C, cooler in winter, with night lowest not under the 15 °C, and medium-high humidity, 60-75%; fundamental is in all seasons a good and constant ventilation.

Regular and abundant waterings, from late spring to early autumn, almost suspended in autumn-winter, moderate and spaced in the blooming period, from late winter to spring. For the watering and nebulisations is to be used rainwater, from reverse osmosis or demineralised and for the fertilizations, only in the vegetative period, are to be used preferably hydrosoluble balanced fertilizers, with microelements, at ¼ of the dosage suggested on the package.

Preferably, it is mounted on bark, trunks, rafts of cork or of arborescent ferns roots, can be also cultivated in pots or baskets with particularly draining and aerated compost, that can be formed by medium sliced bark and charcoal fragments, with possible addition of inerts for improving the drainage.

Transplants and repottings are to be done when strictly necessary by the vegetative restart, signalled by the appearance of the new vegetations at the base of the pseudobulbs.