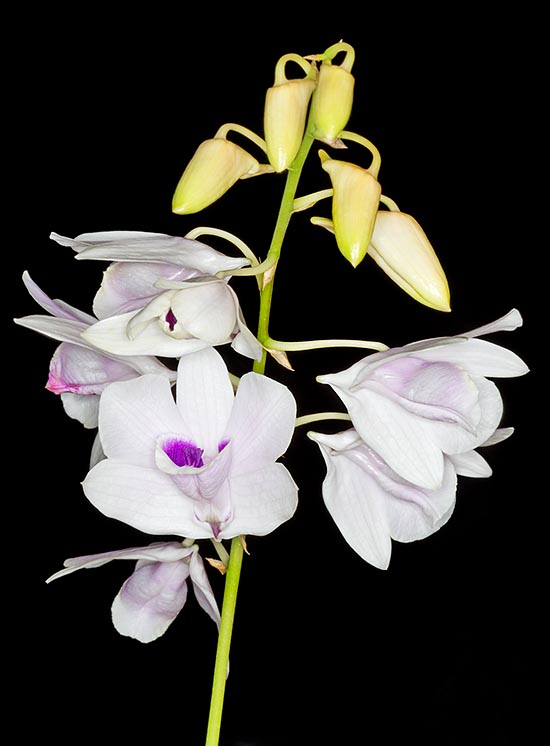 Dendrobium williamsianum is an epiphyte of New Guinea with erect cylindrical pseudobulbs, up to about 60 cm long. Rare in cultivation, has however originated various hybrids © Giuseppe Mazza

The species is native to New Guinea where it grows mainly in the savannas at low altitudes, with climate characterized by a long dry season.

The name of the genus is the combination of the Greek substantives “δένδρον” (dendron) = tree and “βίος” (bios) = life, with reference to the numerous species living on the trees; the species is honoured to the English nurseryman and collector Benjamin Samuel Williams (1824-1890).

Erect or arcuate racemose inflorescences from the upper nodes of the ripe pseudobulbs, up to about 30 cm long, with 6-12 flowers of 5-7 cm of diameter with oblong sepals of white or white slightly suffused of pale violet colour, the two lower ones wider than the dorsal, dilated and merged at the base of the column to form a sort of a conical spur (mentum).

Obovate petals of slightly more intense colour than the sepals, oblong labellum with rather squared apex and curved of intense purple violet colour with whitish margins, run at the base by three erect lamellae of even darker colour.

Rather rare species in cultivation, with attractive flowers of long duration, 6-7 weeks, which has originated numerous hybrids.

Requires high luminosity, medium-high temperatures during the growth of the pseudobulbs, 24-32 °C, slightly cooler during the vegetative stasis, with minimum night ones not under the 15 °C, and medium-high humidity, 60-80%, with continuous movement of the air. 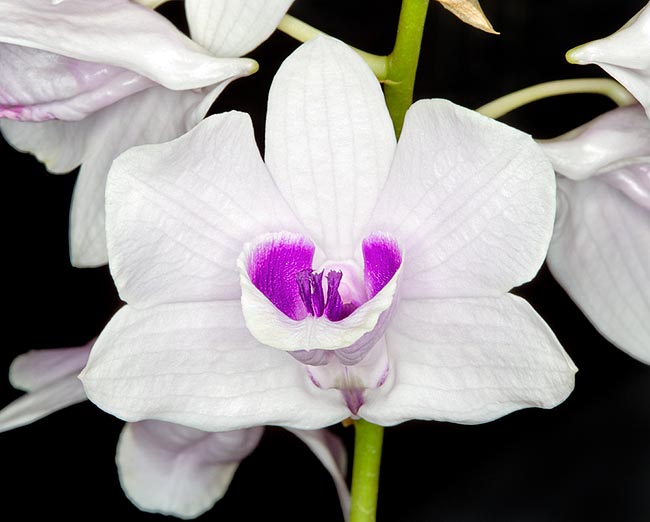 The racemose inflorescences reach the 30 cm, with 6-12 flowers of 5-7 cm of diameter © Giuseppe Mazza

Regular and abundant waterings, from late spring to early autumn, practically stopped in autumn-winter until the vegetative restart.

For the waterings and the nebulisations is to be used rainwater, from reverse osmosis or demineralised, for the fertilizations are preferable hydrosoluble balanced products with microelements, at half dosage than what suggested on the package, to be done exclusively when the pseudobulbs are growing.

It can be mounted on bark, trunks, rafts of cork or of arborescent ferns roots, or cultivated in pots and baskets utilizing particularly draining and aerated compost that can be formed by coir or medium sliced bark and charcoal fragments, with possible addition of inerts to improve the drainage.

The transplants and the repottings, when necessary, are to be done when the new roots appear signalling the vegetative restart.