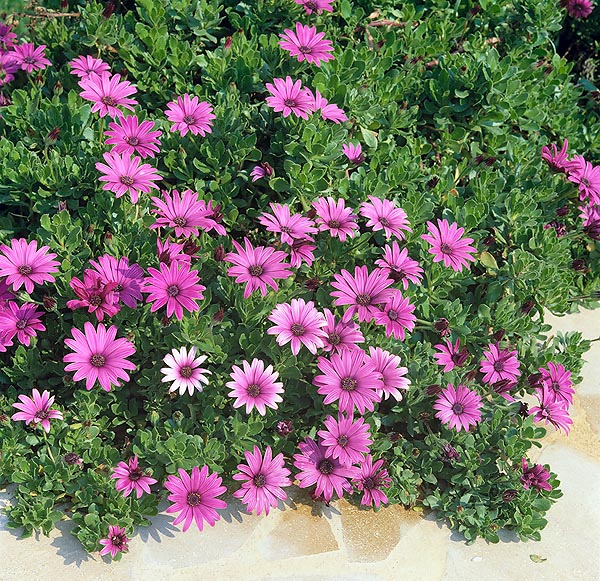 This plant is native to Lesotho, South Africa (Gauteng, KwaZulu-Natal, Limpopo, Mpuma- langa, Province of Eastern Cape and Free State) and Swaziland, where it grows on rocky and also on sandy soils between the 1.000 and the 3.300 m of altitude.

The name of the genus is the combination of the Greek words “dis” = twice, “morphé” = form and “theke” = container, case, with reference to the different form of the fruits produced by the ray and disc florets; the name of the species is the Latin word “jucunda” = pleasant, joyful, with obvious reference.

The Dimorphotheca jucunda E. Phillips (1936) is a perennial evergreen herbaceous plant with tap root, 20-50 cm tall, ramified, with prostrate stems easily rooting on the ground, wrinkled at the touch due to the presence of glandular hairs.

It has alternate aromatic leaves, about 6 cm long and 2 cm broad, of a rather variable form, from lanceolate, oblanceolate to oblong with margins usually indented and wrinkled surface like the stems.

The terminal, solitary, inflorescences, with a diameter of 5-6 cm on a 10-24 cm long peduncle, are the typical flower heads of the Asteraceae formed by a host of sessile flowers spirally inserted on a campanulated base, the receptacle, surrounded by an involucre formed by two series of 15-21 lanceolate, pale green, bracts, 0,7-1 cm long, thin and sharp. The 13-21 flowers of the outer ring, called ray florets, have the corolla obovate, 2,5 cm long, with tridentate apex, formed by five petals joined together, of magenta or purple colour in various tonalities. The ray florets are female and have also the function to attract the attention of the pollinator, like the petals of a single flower. Inside the ring are located the bisexual flowers, called disc florets, with tubular corolla with five lobes of dark purple edged of blackish purple. 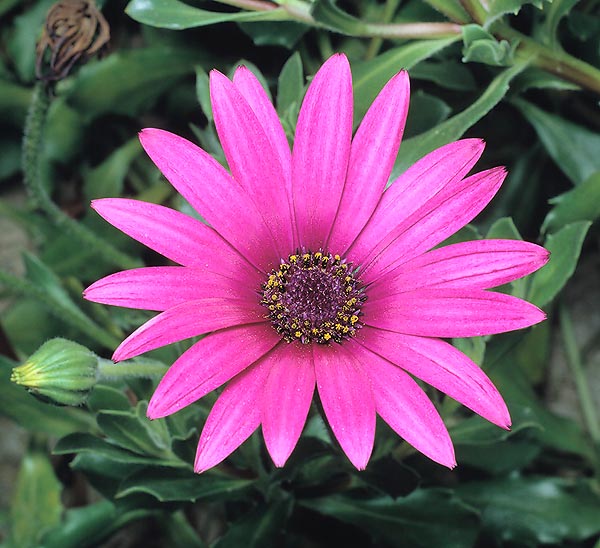 The fruits, containing one seed only and called achenes (or, more correctly, cypselea) in the Asteraceae, are of different form, that of the ray florets are trigon with thick and warty wall, about 5-7 mm long, those of the disc floret are about 7 mm long and 5 mm broad, flattened, heart-shaped, with thin and smooth wall and two winged protuberances.

It reproduces by seed, by late winter in sheltered location, at a temperature of 18-20° C, or directly in the ground in spring, by herbaceous cutting in spring and semi-woody by late summer and finally and easily, by division.

Plant appreciated for its easy cultivation, the fast growth and the abundant, long lasting flowering, from spring to autumn.

It is not particularly demanding about soil, provided the same is well draining, as it is rather sensitive to the radical rottenness due to water stagnation; in summer the watering must be regular, but spaced, in order to allow the soil to dry well between them; once well rooted is quite resistant to dry periods.

It is relatively rustic, as it can resist to temperatures down to about -5° C, but may be easily cultivated as annual in the zones where it cannot survive to the winter season.

The exposition must necessarily be in full sun, the flower heads open, in fact, only in presence of the direct sun light and close as soon as this is intercepted by clouds or other. Ideal for rock gardens, edges, flower beds and as soil cover.

It adapts well also the cultivation in pot, for the decoration of balconies, terraces and verandas, utilizing substrata rich of organic substance with addition of sand or agri-perlite for improving its drainage.