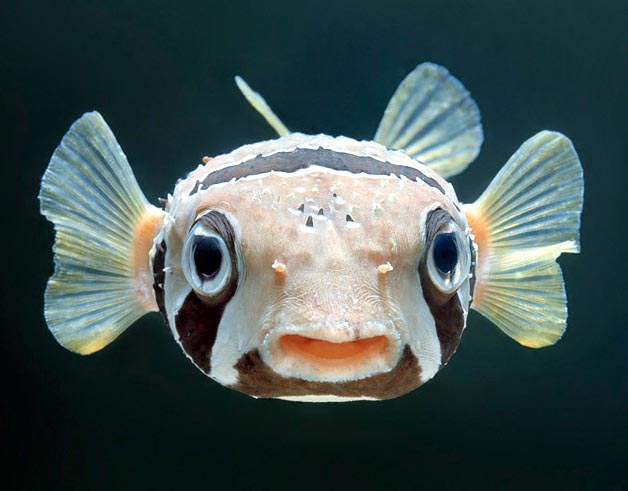 The Black-blotched porcupinefish or Shortspine porcupinefish (Diodon liturosus Shaw, 1804) belongs to the class of Actinopterygii, the ray-finned fishes, to the order of Tetraodontiformes and to the family of Diodontidae which counts only some twenty species.

The name of the genus comes from the Greek “di” = two and “odonto” = teeth, with reference to the fact that they have practically only two teeth, coming from the two incisors, merged between them on both jaws thus forming a powerful beak.

The name of the species “liturosus” comes from the Latin “litura” = erasure, spot due to an erasure, because of the spot-like drawings, with small border, as if one had tried to erase something.

It is mainly present in the tropical waters of the Indian and Pacific oceans. Indicatively, we find it in South Africa, where it reaches also the Atlantic coast, in East Africa, in the Gulf of Aden and the Red Sea, at the Seychelles, Réunion, Maldives, Andaman Islands, in Thailand, Cambodia, Malaysia, Indonesia, Christmas Island, Micronesia, New Guinea, Australia, Philippines, Taiwan and China up to southern Japan. Eastward, it has colonized the Tonga Islands, Samoa, Society Islands, Tahiti and Tuamotu. Southward, in the Pacific, it reaches the New Caledonia.

Lives usually around the 20-30 m of depth, but it can also be met in one metre of water and can go down up to 90 m along the outer side of the reefs. 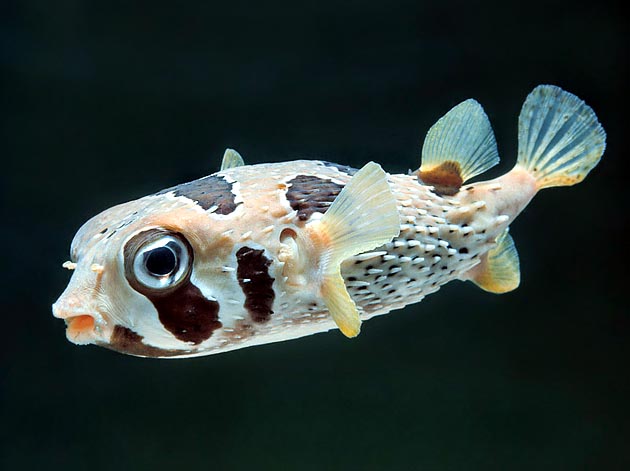 In fact it hunts in the dark sea urchins, crustaceans and shells it crushes with two big teeth © Giuseppe Mazza

The juveniles are frequent in the lagoons and the estuaries, whilst the adults, which live isolated, spend the day hidden in a den and get out looking for food only by the evening.

The Diodon liturosus can exceed the 60 cm, but the average size is of about 45 cm.

But peculiar characteristic stands in the presence of scales transformed in spines, bent towards the tail, which may erect in case of danger when the fish inflates by water and assumes a roundish look. This is a way for frightening the predators and for reminding them that they have a poisonous skin, as it is imbued of tetrodotoxin, a molecule hundred times more powerful than the cyanide, which is found also in high doses in the liver, in the gonads and in the entrails of the animal. The livery, yellow-cream-pink on the back and white ventrally, shows some dark brown spots edged of white. The showiest spot includes the eye, getting down along the cheek with an evident mimetic function.

The Diodon liturosus nourishes of crustaceans, gasteropods, bivalves and sea urchins it crushes without any effort with its strong beak. During the reproductive period some couples take form and the fecundated eggs are abandoned to the currents. 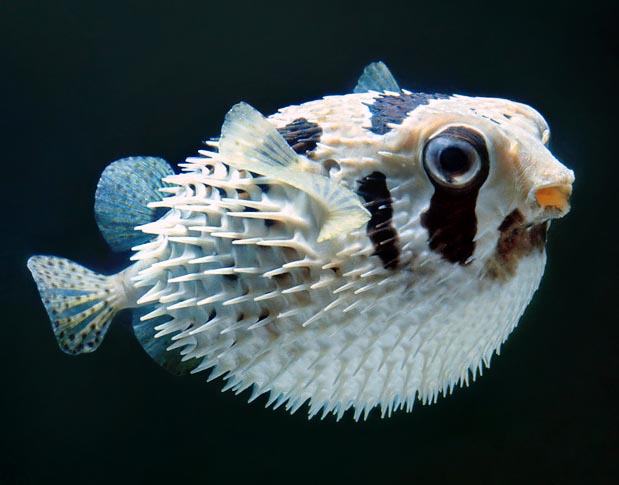 The eggs open after 5 days of navigation and the larvae, after having consumed the rich yolk sac, nourish of plankton spending a long period in open seas. This allows diffusing the species which, in spite of the risks, ends up also on the plates of the natives because the muscles are not poisoned, but rare cases of ciguatera, a different intoxication related to their diet.

But the most frequent fate, when the porcupinefishes get caught in the nets, is to transform in macabre dried varnished souvenirs, to be appended in the tourists’ homes, not to forget the eastern medicine and the aquaria market.

The populations, decimated by the events, can double their members in 1,4-4,4 years and the vulnerability index of the species, moderate today, is of 30 on a scale of 100.