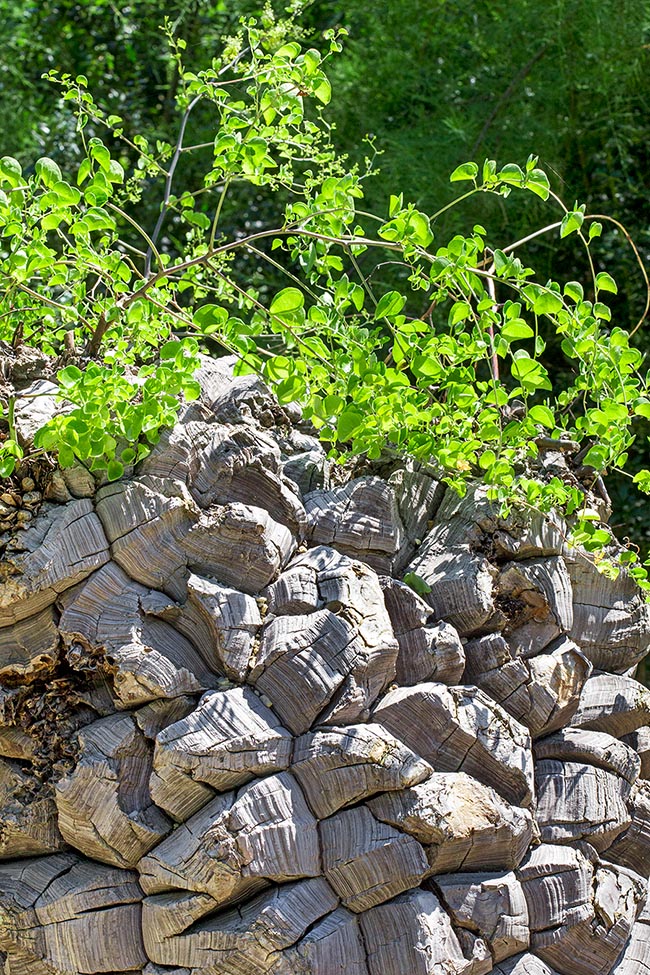 Native to southern Africa, Dioscorea elephantipes is a dioecious plant, that is with reproductive organs on different plants, characterized by a convex emerging tuber that can reach 3 m of diametre and 365 kg © Giuseppe Mazza

Dioscorea elephantipes (L’Hér.) Engl.  is a Monocotyledon native to southern Africa growing between 150 and 1.200 m above sea level, in the arid regions of the karroid. It is found on rocks exposed to all weathers, on stony and arid slopes, under the protection of spiny and succulent brushes such as Carissa haematocarpa (Eckl.) A. DC. together with various species belonging to the genera Gymnosporia, Rhus, Aloe and Crassula.

The name of the genus is honoured to Pedanius Dioscorides from Anazarbus (a site in Asia Minor), physician, botanist and pharmacologist who lived in the first century AC, mainly known as author of the opus De materia medica. The specific epithet refers to the resemblance of part of the plant with the elephant’s foot.

Dioscorea elephantipes is a dioecious plant, that is with separate sexes, whose male and female flowers are produced on different plants.

It has a quite particular look due to the presence of a convex and hemispherical stem (tuber called caudex) partially interred, not ramified, woody, of hard consistency but succulent inside and covered externally by a thick grey-brown bark, that, with the age, becomes deeply fissured in polygonal prominent plates. In nature, it can reach 3 m of diametre with a height of almost one metre from the soil and an estimated maximum weight of 365 kg.

In the young plants, the surface of the tuber resembles a carapace of turtle whilst in the adult plants it divides in irregular pieces similar to cork, and its whole resembles an elephant’s foot.

From the tuber develop the winding aerial stems, that can be 10 m tall with alternate leaves, having entire to lobate (heart-shaped) laminae of glossy green colour. The flowers are formed by six equal elements (tepals), very small and of yellow-green colour, grouped in racemose spike inflorescences and appear, in the natural habitat, normally in May or in June.

The male flowers have stamens as long as the tepals, in number of 6, with oblong or globose anthers, of clear yellow colour, carried by filiform filaments. 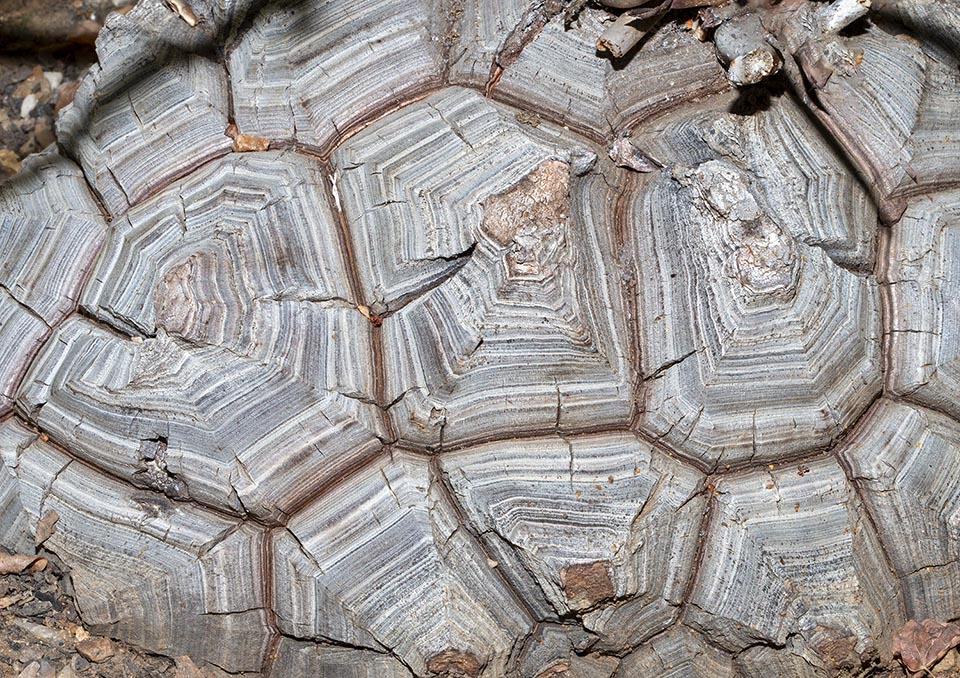 In the young plants the tuber surface resembles a turtle carapace, but in the adult, it divides in prominent irregular, cork-like, pieces reminding an elephant’s foot. From the tuber develop long aerial winding stems that can be 10 m tall with more or less lobate leaves. The tuber has very high levels of steroidal saponins of commercial value © Giuseppe Mazza

The pollination is cared for by the bees and the bumblebees. The female flowers have tepals of mustard colour and present a trilocular inferior ovary that, when maturity is reached, ripens a 2,5 cm capsule, of pale brown colour, containing up to six seeds having a membranaceous wing.

The seeds are released in September and in October. The plant in its natural environment goes to rest during the warm and dry summer and grows during the winter and spring times. 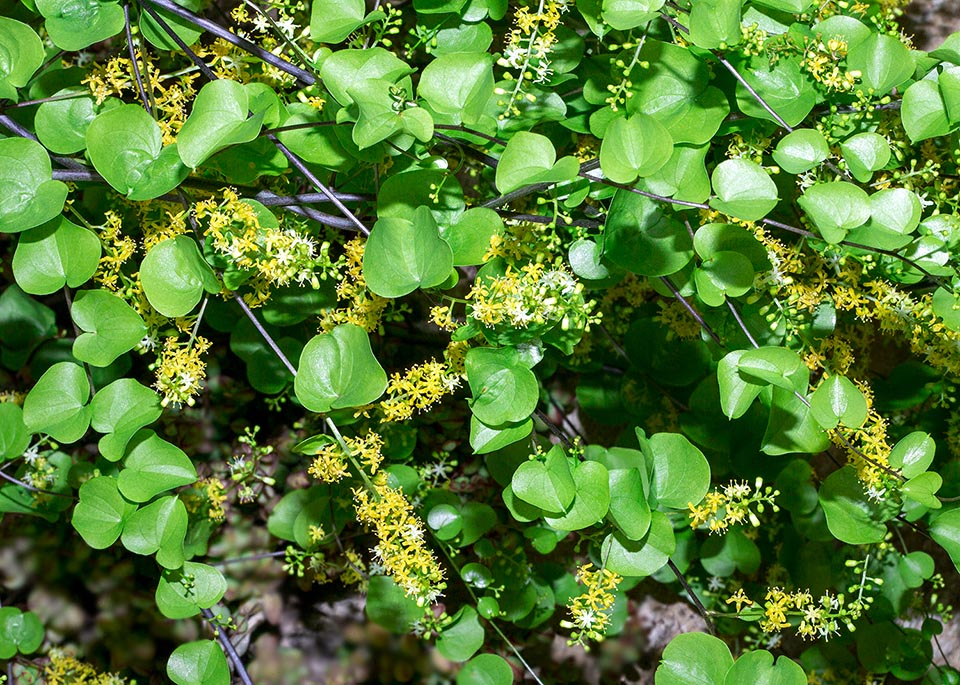 It’s a species that in nature rests in hot and dry summers. Leaves are often lost and grows again in winter and spring months © Giuseppe Mazza

The tuber has very high levels of steroidal saponins of commercial value such as the diosgenin that is utilized as base molecule for the commercial synthesis of steroids like the cortison, the pregnenolone, the progesterone and other products of steroid nature (i.e. birth control pills).

The wild plants, in the past, have been victim of massive collections done by unscrupulous collectors or by native “Khaikhai” populations of southern Africa, called by the Dutch, Hottentots, for medical use as well as for feeding. This last use requires however a long work for removing the toxic compounds and consequently now the tubers are consumed only in times of famine. 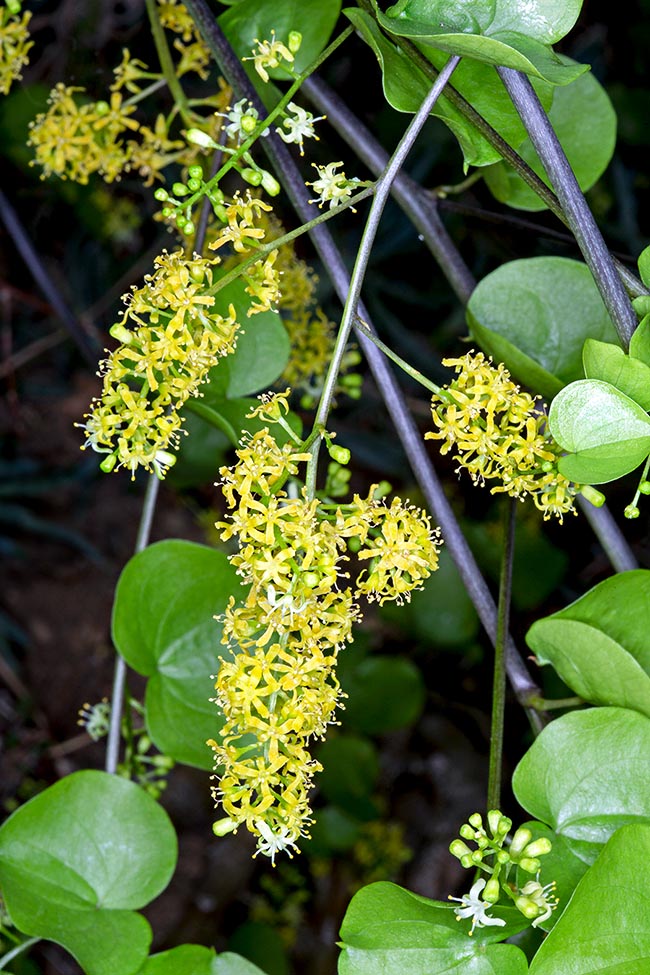 Dioscorea elephantipes propagates by seed and can be cultivated in clay pots to allow the presence of more oxygen in the potting mixture and also to guarantee better drainage.

The winged seeds must be interred in flat bowls, possibly on warmed pallets, at a maximum depth of 4-5 cm. They germinate more easily in indirect light.

During the growing time the plant is to be watered when the soil id fry and this operation is to be done in luminous and warm days to minimize the risks of rot. It must be absolutely avoided to get water entering the point where the new bud will germinate.

If there are no leaves, during the summer period, waterings must be minimized or suspended.

Usually the fertilization is to be done on a monthly basis, but in summer with a greater quantity of nitrogen and with less potassium.

As Dioscorea elephantipes is a winter growing plant, it is not to be watered until when it begins to give the first signs of vegetative regrowth. The caudex is to be kept in shade or in half-shade, whilst the leaves can stay in full light in order to favour the chlorophyll photosynthesis.

If the temperatures keep over the 5 °C it is not necessary to shelter the plant. During the vegetative period if the temperature rises, the plant risks to enter in dormancy with the loss of the aerial buds. In the cold climate locations, the plants must be kept in open air from mid-May until September and then put in greenhouse with a temperature of 12-15 °C and not more, in order that the habitat is cool enough to maintain the control of parasites such as scale mites, red mites and thrips.

→ To appreciate the biodiversity within DIOSCOREACEAE family please click here.