The Tree snake or Boomslang (Dispholidus typus Smith,1829) is a highly venomous serpent, provided with a mortal venom even in minimum dosages, but it does belong neither to the group of the elapids, nor to that of the viperids, reptilians known for their dangerousness, but rather to the colubrids family (Colubridae), serpents which were usually considered as harmless, till when they realized, in the most traumatic way, that some lethal species were standing among them.

The colubrids, group to which belong also the harmless snakes, such as the ringed snake or the green whip snake, in Italian called also “milordo” due to its elegant livery (Coluber viridiflavus), include species not holding venom fangs (aglyphs), but also species equipped with venom glands and fangs suitable for inoculating the venom, which, however, are placed back on the palate (opysthoglyphs) and usually are less complete than those of the solenoglyphs (vipers and crotalids) and the proteroglyphs (elapids). The venomous colubrids, therefore, do have imperfectly hollow fangs, as the injection needles may be, but only grooved, and usually, in order to inject the poison, they must “chew” on the prey (or the disturber), in such a way to have the venom dripping in the injury.

The Dispholidus typus was well known by the Afrikaners, but the settlers of the austral Africa usually interested in seizing serpents, having, by that time, far more pressing priorities than the herpetology, hence, seen that it’s a non aggressive reptilian which spends its life on the trees, they never had the occasion to be afraid of him, and in fact, the incidents caused by this species are practically not existent, excepting those incurred by herpetologists and lovers of reptilians seizing and handling them. As a consequence, the boomslang, as well as the twig snake (Thelotornis), were considered as harmless colubrids, like the spotted bush snake, and this till when a famous American herpetologist was bitten by a specimen of Dispholidus typus. After this accident, the herpetologist noted diligently the symptoms, until when the demise occurred, caused by serious internal haemorrhages. Wit a similar mechanism it became then evident that also the Thelotornis were potentially deadly colubrids.

The boomslang is an arboreal serpent with a robust body, from 100 to 150 cm long, as an average, but reported also as of 200 cm, covered by keeled scales (characteristic which, along with the shape of the muzzle and the dimensions of the eye, prevent any confusion with the green mamba), placed by mid length, in 17-21 oblique rows. 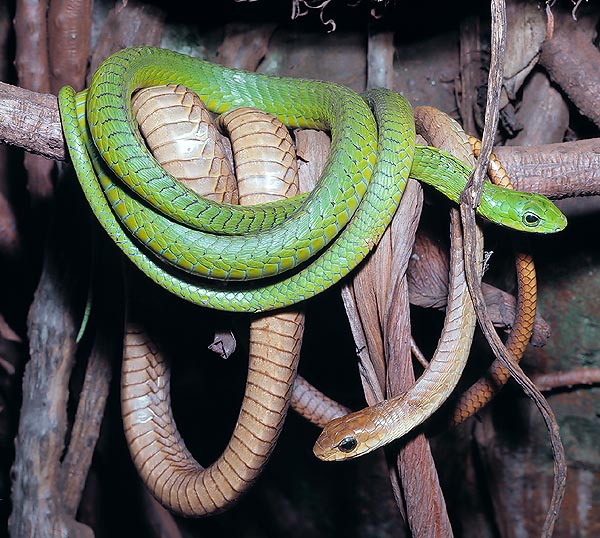 The Boomslang (Dispholidus typus) copulates on the trees © Giuseppe Mazza

The head is short, with short and blunt, very big eyes with round pupil, green and placed in a way to allow a binocular vision which is of help when hunting animals staying often motionless between the branches.

The venom fangs are placed much back in the superior maxilla, practically under the eye.

When the serpent is upset or frightened, it swells the anterior part of the body and the neck region, not flattening the same transversally, as happens on the contrary in other serpents, like the cobras, the black mamba or the Australian tiger snakes, but in cylinder or sausage shape (in its turn, the twig snake or Thelotornis, “swells” if vertically, flattening it transversally); this is an expedient to appear bigger and more mincing in front to a potential predator.

The colouration is extremely variable and, just to complicate the things, the variations connected with habitat and range, are common and manifold.

The juvenile livery is usually grey or, more frequently, brownish, with small blue or azure, the throat region is pale (orange, white or even yellow), whilst the ventral part is yellowish or cream, but speckled by small brown dots.

It prefers zones with lush vegetation, from the fynbos of the coastline to the thorny bush and even the true and actual forest, whilst it gets out from the arid and sub-desert zones. It is found in South Africa (but Kalahari and arid zones), in Namibia, but only in the areas rich of vegetation, like Esotha pan and Caprivi finger, in part of Botswana and in Zimbabwe.

It is a diurnal serpent, and even if arboreal, at times it is sighted while creeping on the soil, for moving from a group of plant to another, but, when it is located in its habitat, between foliage and branches, it is very difficult to see it, as it blends perfectly with them.

The colouration of the young changes when it reaches about the 100 cm of length: at this moment, whilst the female keeps a more discreet colouration, chestnut or brown, with ventral part cream, the male assumes more brilliant colours: emerald green, often with a black network, caused by the dark colour of the skin visible among the scales, black coal with lower parts bright yellow, rust red or maroon.

While hunting, the binocular vision, allowed by the position of the eyes and the shortness of the muzzle, along with the wide size of the eye, render it capable to distinguish the prey even if the same is motionless, whilst most of the serpents may locate only moving objects, and this is quite useful for detecting, for instance, the chameleons, which form a good part of its diet.

Mating takes place on the branches of some plant or shrub (what is rare among the serpents, even if arboreal), and the eggs (it’s an oviparous species) are laid about four months later, in the late austral spring or by the beginning of summer.

The quantity of eggs, measuring about 4 cm x 2 cm, varies from 8 to 23, and the chosen place may be on a tree, usually in a hollow or in a woodpeckers, kingfishers or starlings abandoned nest, or even on the ground, if a suitable location is found, with proper humidity and temperature. The eggs hatch after 4-7 months, depending on the climatic conditions, and the newborn are about 30 cm long. 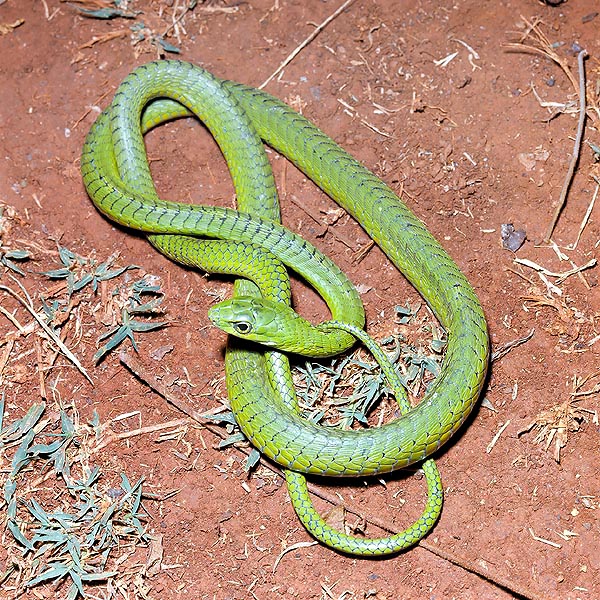 The adult males have a bright green livery, the females are maroon or brown © Giuseppe Mazza

In the Cape Province, on the Somerset East Mountains, is reported a population of boomslangs called Berg-boomslang (Berg = mountain, in Afrikaans).

These reptilians, which should reach bigger dimensions, up to 270 cm and ought to be more aggressive, should represent an adaptation to a grassy habitat and should be more terrestrial. This report might appear imaginative, but it appears also on a herpetology book I own, whose author is an authority in the field of herpetology, reason why I just cite it without expressing any judgements about.

It is not an aggressive serpent, as we have seen before, on the contrary, the boomslang always tries to avoid the confrontation, however if compelled, it swells the fore part and, if the intimidation should be sufficient, bites with fury and speed, holding the stricken part and chewing in order to pour the venom inside the injury. The venom is much powerful, maybe one of the most powerful by far.

For instance, the venom of the eastern green mamba has DL50 (lethal dosage for laboratory mice) of 1,3 mg/kg and the average dose able to kill an adult human is of about 18-20 mg.

The extrapolation I am on the way to do is not mathematical because not necessarily the DL50 and the lethal dose for the man go hand in hand. In fact, DL50 is the quantity of venom, expressed in milligrams per kilo, able to kill the 50% of the inoculated laboratory mice, and the action of the venom not necessarily is the same in different species. However, with a fair approximation, we can utilize this system for getting an idea of the quantity required for killing a person, since that, luckily, the case history about this matter is not rich.

The venom of the boomslang has a DL50 of 0,72 mg/kg, it has therefore double bower, on the mice, if compared to that of the eastern green mamba (Dendroaspis angusticeps ) and, at least theoretically, the lethal dose for the humans should be around the 9 or 10 mg, we are therefore talking of a higher power, milligram per milligram, also than that of the black mamba.

It is my opinion, however, that this equation is really virtual, at least in this instance, for the following reasons: the quantity of venom produced by Dispholidus typus is rather low, and a bite may inject from 1 to 16 mg, whereby, seen the dangerousness of the bite and the very serious effects found in good part of the reported cases, I would think that the lethal dosage for the man is much less, maybe 2 or 3 mg. This would render the boomslang venom one of the strongest venom in absolute, among the serpents, or, perhaps, the species-man is more vulnerable to such toxins than the mice.

The venom is very viscous and contains also neurotoxic principles, however the fraction responsible of the demise in the man, is the heamotoxic one, cause of impressive haemorrhages. 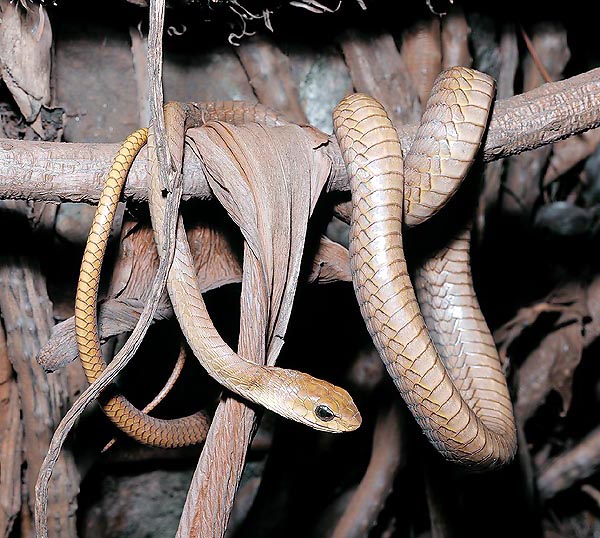 The venom fangs are badly placed, back in the mouth, but the venom is very strong © Giuseppe Mazza

Other interesting characteristic of the venom is the frequent delay standing from the bite and the appearance of the first symptoms, which may manifest even 48-72 hours after the incident, although this is not mathematical and precocious symptoms may occur.

The macroscopic haematuria (blood in the urines) is frequent and at times also haemorrhages and intra-fascial haematomas, peritoneal or in other locations. Also the appearance of violent cephalalgia may occur, with jet vomiting, at times the first symptom of cerebral haemorrhage, which may be rapidly fatal.

Inside the blood system of the victim a phenomenon known as disseminated intravascular coagulopathy happens, with formation of microthrombi in the capillaries and “exhaustion” of the coagulating factors, thus starting new haemorrhages.

The cases of demise attributable to this species, as I said, are few, maybe about twenty at all, and among these are to be remembered that of the herpetologist I was talking of and at least two lovers of serpents of Transvaal.

The polyvalent serum commonly utilized for the treatment of the bites of several dangerous African species (mamba, cobra, puff adder, Gabon viper, etc.) is absolutely ineffectual against the venom of the boomslang, so they produce a monovalent specific serum which, however, is, in turn, useless in the bites of Thelotornis (colubrid with mortal venom and with haemorrhaging action much similar to that of Dispholidus typus and for which, up to now, a specific serum doesn’t exist). Wishing to take a practical conclusion about the dangerousness of this serpent, therefore, I would conclude that it is a potentially very dangerous reptilian, but whose real dangerousness for the tourist, hunter, and trekker, is almost nothing and the chances of being bitten are almost zero. Obviously, it’s a different matter for the herpetologist handling such animals.

In any case, another remark is to be made about the mechanism of inoculation which, as we have seen, requires the reptilian to bite, hold the stricken part and to chew for at least one or two seconds, which gives the possibility, at least theoretical, and for those used to handle serpents, to take off immediately the serpent, thus limiting the injected dose.

Furthermore, the latency window between bite and first symptoms is usually ampler than in other species and allows (also here, at least theoretically), to reach the nearest hospital, where will be realized the necessary actions and, in case, the monovalent serum will be administered. With this I do not want to affirm that being bitten by a boomslang is a thing of naught, but by sure it reveals to be a less pressing and dramatic emergency than a bite of black mamba or cobra.