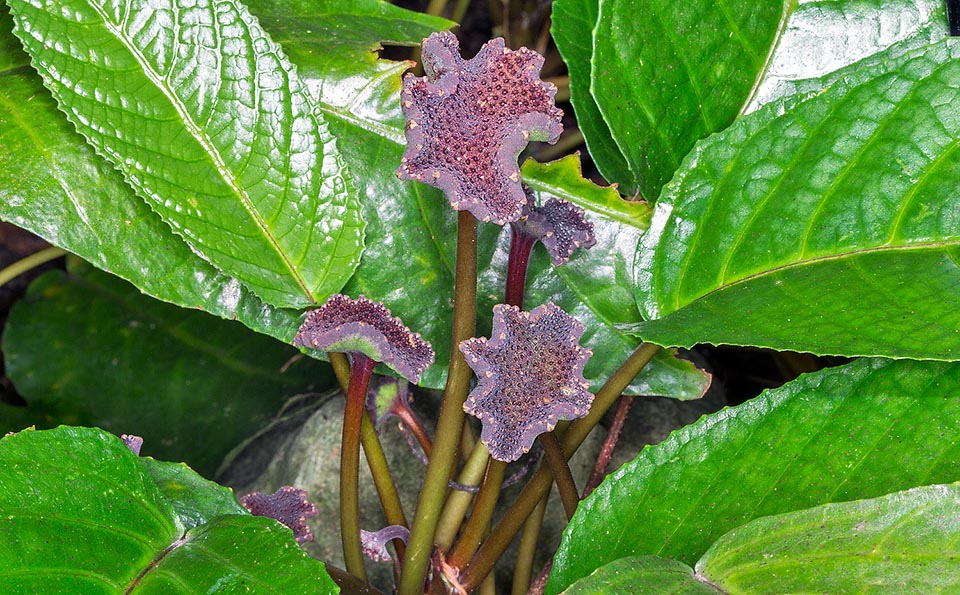 Herbaceous relative to the fig, Dorstenia bahiensis of the Brazilian rainforests is a creeping rhizomatose, perennial, evergreen, with 12 cm stems © Giuseppe Mazza

The species is native to Brazil (Bahia and Pernambuco) where it grows in the underwood of the pluvial forests.

The genus is dedicated to the German botanist Theodore Dorsten (1492-1552); the specific Latin name “bahiensis” = of Bahia, refers to one of its places of origin. 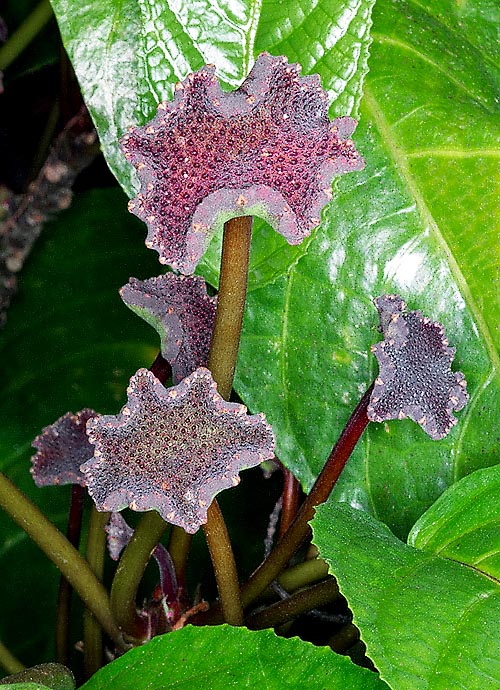 Its inflorescences are formed by an orbicular receptacle, peltate at the centre, with crenate-toothed and wavy margins, flattened, of 1,2-4 cm of diameter, purple brown above, green to greenish brown below. It has tiny male and female flowers. The fruit is a syncarp, formed by the fleshy and enlarged receptacle, that expels seeds meters far © Giuseppe Mazza

The Dorstenia bahiensis Klotzsch ex Fisch. & C.A.Mey. (1846) is a creeping rhizomatous herbaceous species, perennial, evergreen, with erect to prostrate fleshy stems, about 12 cm long; all parts of the plant contain a milky sap of yellow colour.

The inflorescences, on a 4-15 cm long peduncle, solitary at the axil of the leaves, are formed by an orbicular receptacle, peltate at the centre, with crenate-toothed and wavy margins, flattened, of 1,2-4 cm of diameter, of purple brown colour above, green to blackish brown below, on which are distributed the tiny male and female flowers.

The fruit is a syncarp formed by the fleshy and enlarged receptacle where are immersed small dehiscent drupes. The white seeds, about 2 mm long and 1 mm broad, are expelled, when ripe, explosively, up to some meters far, due to the swelling of the surrounding tissues. Due to the facility with which the seeds germinate in a humid ambient, it may become invasive.

It easily reproduces by seed, that has a short duration of germinability, placed superficially on draining and porous loam maintained humid at the temperature of 24-28 °C, with germination times of 10-20 days, and by division of rhizome. Species with the ornamental foliage that arouses a particular interest because of the unusual inflorescences, cultivable in the tropical and humid subtropical climate zones in shady position. It requires draining soils, from lightly acidic to lightly alkaline, maintained constantly humid, in dry periods it may loose the leaves behaving as a semi-deciduous; ideal as ground cover and for borders in shady gardens.

Where the climate does not allow a continuous permanence in open air it can be cultivated in pot, utilizing a draining loam rich of organic substance maintained humid, but without stagnations, in ambients with high humidity and lowest temperature over the 15 °C, even if it is able to stand lower values for a very short period. Due to the unusual inflorescences is often cultivated by the collectors of succulents together with congeneric species.

→ To appreciate the biodiversity within MORACEAE family please click here.