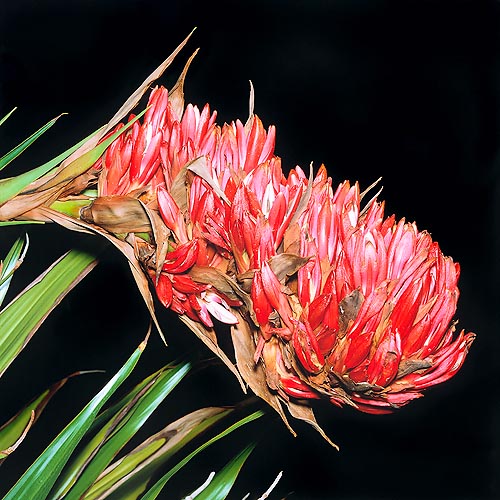 The showy and heavy inflorescence exceeds the metre, with 10-12 cm flowers © Mazza

The Doryanthes palmeri W. Hill ex Benth. (1873) is native to the coastline of Australia (Queensland and New South Wales), where it grows on steep, exposed, slopes or on rocky projections.

The name of the genus comes from the Greek “dory” = lance and “anthos” = flower, with reference to the shape of the inflorescence; the species was honoured to the Queensland Prime Minister of that time, Arthur Hunter Palmer (1819-1898).

Herbaceous perennial plant of slow growth, formed by a rosette of several lance-shaped leaves, long about 2 m, but which, in nature, can be more than 3 m long and 20 cm broad, of a bright green colour.

The inflorescence, on a peduncle long 2-4 m provided with short leaves, erect at first, then bent due to the weight of the flowers, is 1-1,2 m long with several bright red flowers, 10-12 cm long, inside reddish bracts.

The fruits are ovoid capsules, about 8 cm long, containing several flat seeds. It reproduces by seed, taking about 13 years for the first blooming, or by basal shoots, which are rather rarely produced.

Impressive plant which needs wide spaces, cultivable in tropical, subtropical and warm temperate areas, in full sun or partial shade, on soils even poor, provided well draining. It can be cultivated in a container, where, of course, it will assume reduced dimensions, in a very luminous location.

When adult, it can resist to long drought periods and to temperatures around -4°C, even if losing the aerial part, but with damage to the inflorescences already around the 0°C. It resists well also to fires, which are rather frequent in nature, which, on the contrary, give new strength and stimulate the growth of basal shoots and the germination of the seeds.

→ To appreciate the biodiversity within the DORYANTHACEAE family please click here.