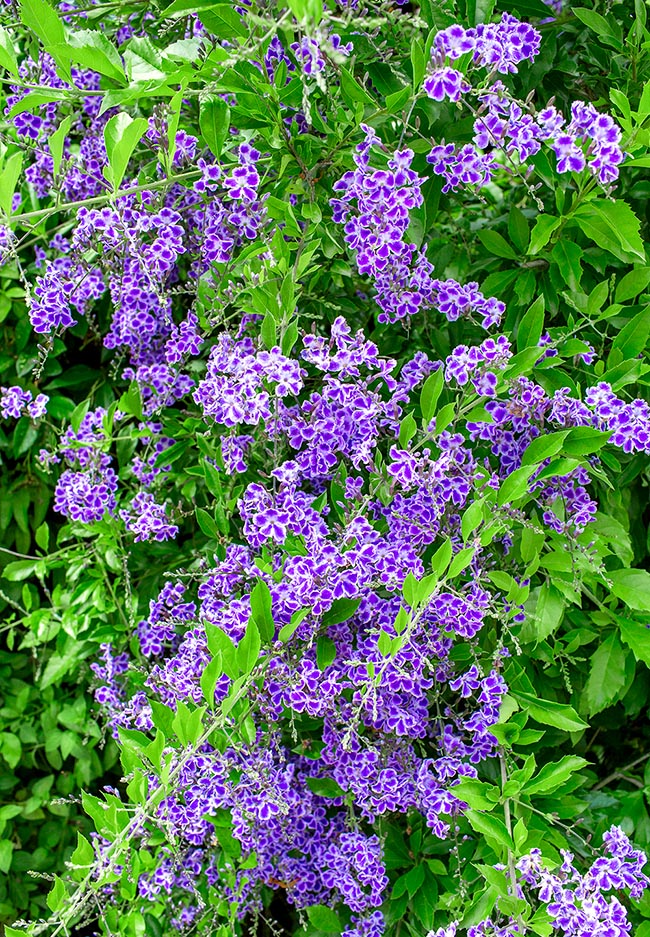 Native to tropical and subtropical Alemerica, the Duranta erecta is a shrub introduced in Europe by ‘500 end © Giuseppe Mazza

The Duranta erecta L. is native to Mexico, Caribbean and Central and South America where it commonly grows in rocky or sandy coastal zones with full sun or in humid and disturbed locations in the hinterland.

It has been introduced in Europe at the end of the ‘500 and later on has diffused in many regions of the world, where it is widely cultivated as ornamental plant in the tropical and subtropical gardens. It has naturalized in many places and is considered as an invasive species in Australia, southern Asia, China, South Africa and in several islands of the Pacific Ocean.

Linnaeus in 1753 gave it the generic denomination to honour the physician, botanist and poet Castore Durante (1529-1590), author of the opus Herbario novo (1585) rich of xylographs and of texts where are indicated the properties and the preparations of numerous medicinal plants of Europe, East and West Indies.

The specific epithet erecta comes from the Latin “erect, vertical”.

It is a shrub or small tree with an erect or climbing posture, 2 to 6 m tall. It has dark brown bark and quadrangular or climbing ramifications, usually provided with thorns.

The leaves, sustained by a 0,5-1 cm petiole, are opposite, ovate-elliptic, lanceolate or ovate, up to 6-8 cm broad with cuneate or acute base and with entire or slightly toothed margin and acute or acuminate apex. The colour of the leaves is a nice green, at times yellow, and with white dots close to the margins.

The nice flowers are pedicellate, zygomorphous, about 1-4 mm long, the calyx is poorly pubescent and of pale green colour, with 5 sharp teeth. The corolla is gamopetalous with narrow and long tube, widened at the apex, uneven with 5 lobes, poorly hairy on the throat, of light blue, blue and sometimes purple and yellowish purple colour.

The stamens are 4, of which 2 are longer (didynamous), inserted in the corolla tube, with filaments, 2-2,5 mm long, hairy, of green colour and creamy or oblong. The ovary is globose, about 1 mm long, thin style of about half the length of the corolla tube, glabrous, with quadrilobed stigmas.

The flowers emit a delicate vanilla scent, and are arranged in racemose panicle inflorescences, axillary, terminal and on 5-25 cm long ramifications, with 1-2 mm bracts, pubescent. The fruit is a fleshy drupe of about 0,75-1 cm of diametre of bright yellow colour and usually containing eight seeds.

From late spring to autumn, it is possible to admire the splendid blooming of this plant with the fruits and, in the mild climates, it may bloom all over the year. 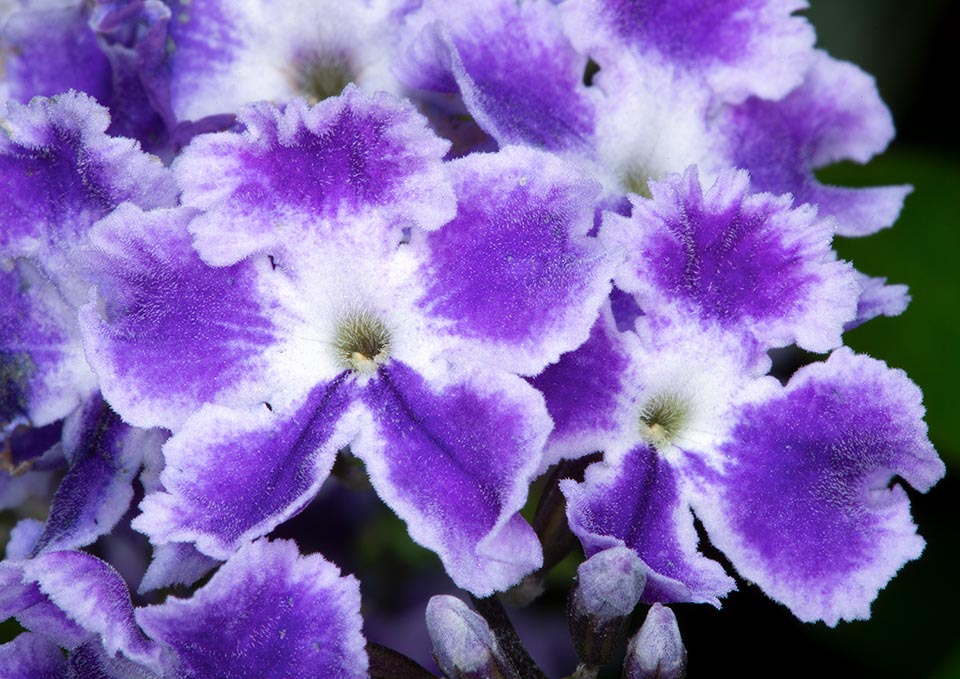 In the leaves are present saponins whilst in the fruits is present an alkaloid analogous to the narcotine, substance poisonous to man and animals, but not to birds that eat the fruits, spreading their seeds.

D. erecta is amply cultivated as ornamental plant for its showy flowers and fruits that render it suitable to embellish the gardens and espaliers and with the flowers that attract bees, butterflies, and, in the American tropical areas, the hummingbirds. 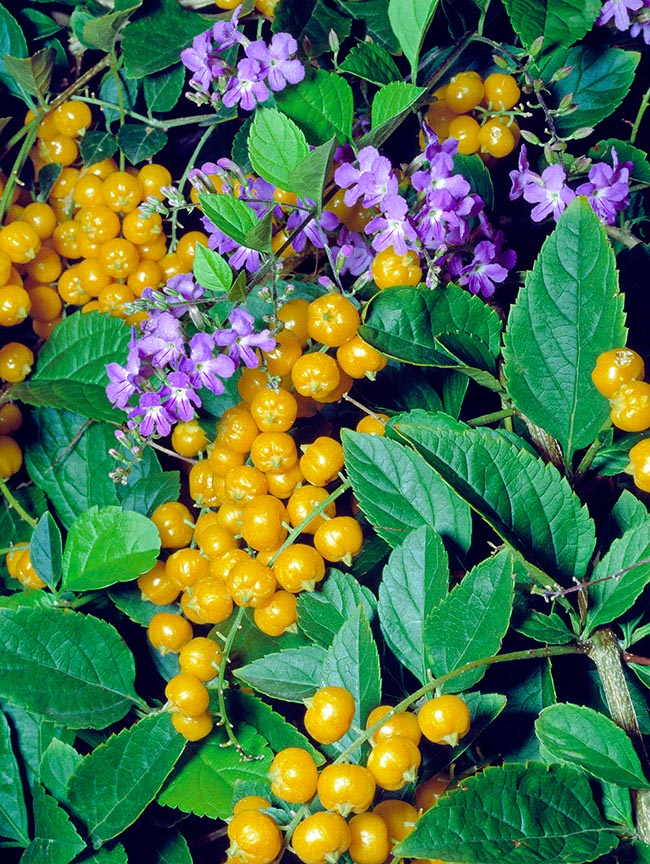 The fruits are bright yellow fleshy drupes. Often present together with the flowers, they are poisonous for man but not for birds who diffuse seeds. They show medicinal virtues and macerated with water kill the mosquito’s larvae © Giuseppe Mazza

The D. erecta  is cultivated in full sun in moderately fertile soil, cool and well drained, sheltered from the cold winds, but adapts to grow as bonsai or as decorative plant in pot or in small containers, with the wariness to repot each 3-4 years or when the roots get out from the watering drain hole. The loam is always to be replaced with a new fresh one.

The fertilization is to be done once a month in spring and in all summer with manure for flowering plants diluted in the water used for the watering. In order to get an abundant blooming, it is necessary to cultivate it in sites where are present at least some hours of direct sun, as with a poor insolation it will produce more leaves, to the detriment of the flowering.

The multiplication of D. erecta is done by seeds in spring at 18-21 °C or by cutting, picking up the semi-woody branchlets of 12-20 cm during the summer season. The roots will begin to develop quite fast, especially if a radicant solution is applied. To favour the bushy growth of the plant with more branches and flowers, it is possible to carry out prunings after the fruitification.

The D. erecta does not fear the cold and can stand short periods of frost but can suffer attacks from aphids that cause the honeydew, and this may favour the development of sooty molds and of cochineals that produce a whitish substance on their eggs. The aphids can be taken off with Marseille soap dissolved in water or, in a less ecological way, with the use of specific insecticides. Marseille soap is good also for removing the cochineals but can be utilized also a cotton swab dipped in alcohol by rubbing it gently on the leaves and on the branches. After a time, sufficient to allow the action of the products, it is good practice to wash the treated parts well. Water stagnation can cause root rots, therefore it is good to act accordingly avoiding utilizing, for the plants in pot, the saucers. If the climate is too humid or rainy, this plant is subject to be also attacked by the oidium, or powdery mildew that covers with a whitish patina the upper pagina of the leaves. In this case, specific fungicides can be used.

The D. erecta is an important source of natural remedies amply utilized to treat many diseases. The infusion of the leaves and the juice of the fruits are employed as diuretic, anthelmintic and for neuralgic disorders. Parts of the whole plant are used also in treating infertility.

The fruits, macerated with water, produce a juice that, even if diluted in 1:1000 parts, is fatal for the larvae of the mosquitoes and therefore it has been utilized as larvicide in ponds and swamps. Also in literature, we find for D. erecta a great variety of medicinal activities. Its antimicrobic, antimycotic, antiviral and antimalarial action has been proved. Several experimental and clinical studies have also shown its strong activity for free radical washing. 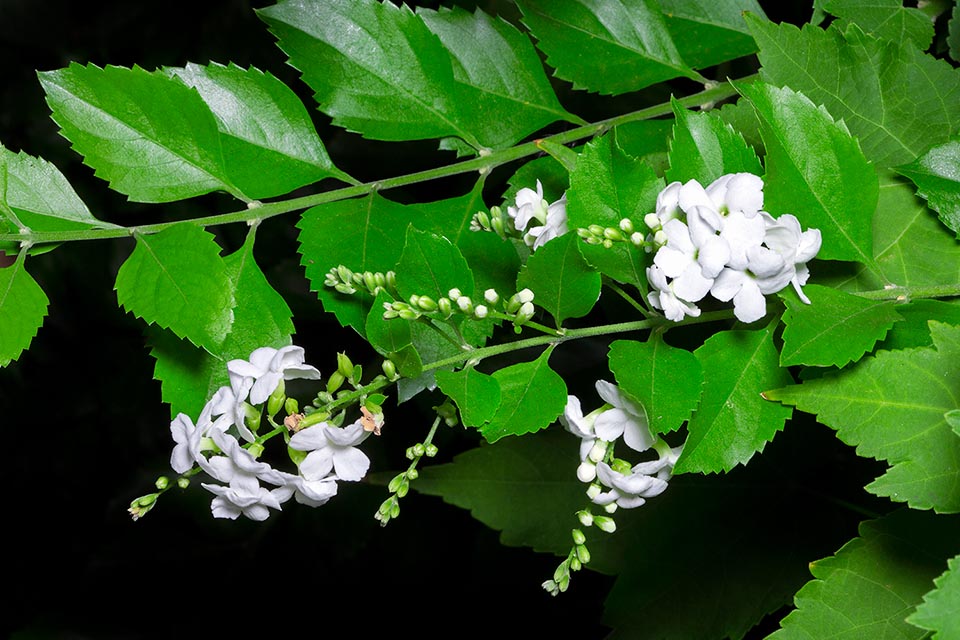 Duranta erecta ‘Alba’. Due to the beauty and easy cultivation is a species frequent in the gardens with several varieties. Resists cold but can aver invasive in the tropics © Giuseppe Mazza