Easy roses: thick hedges and specks of colour without too many cares

Flowering with no problems. The Meilland research has created a group of no graft roses, easy to cultivate, disease resistant, for thick hedges and colour patches in gardens. 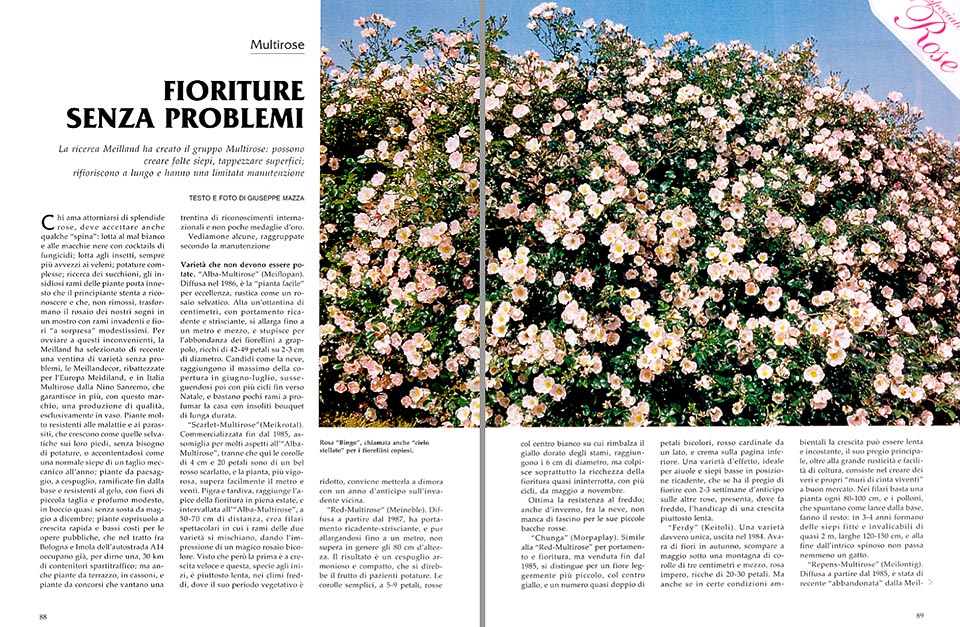 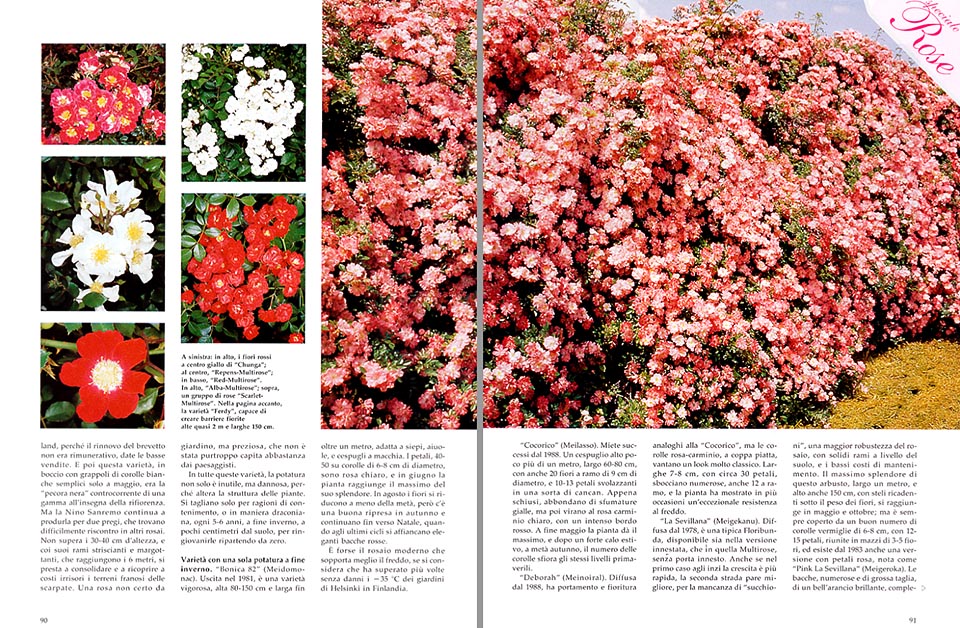 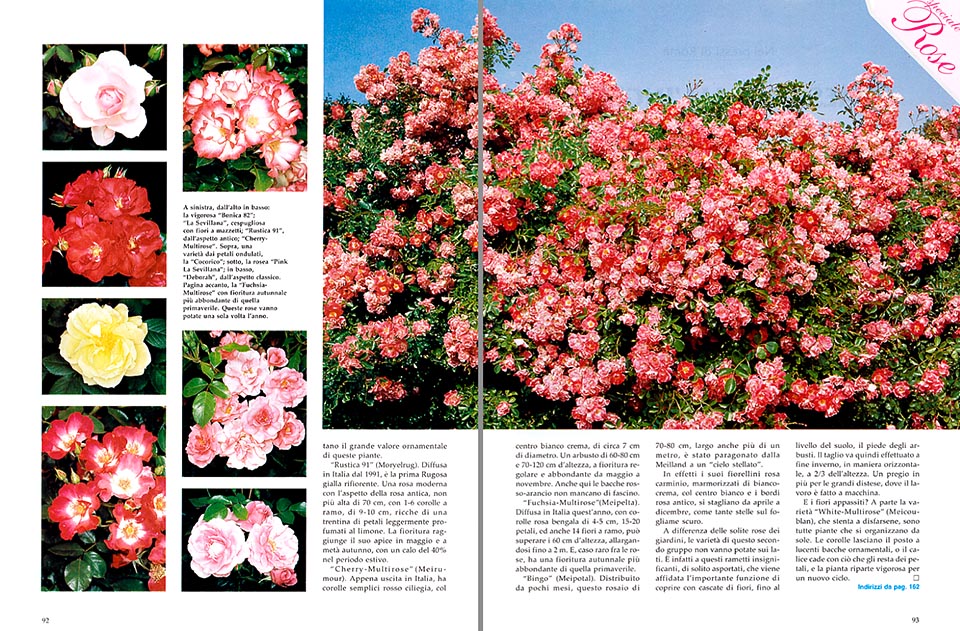 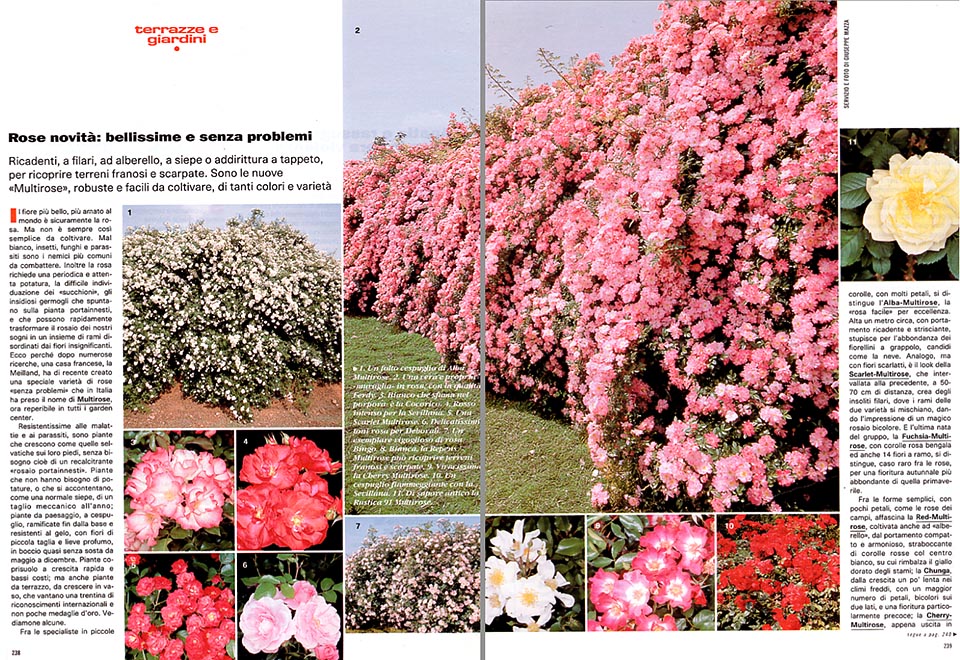 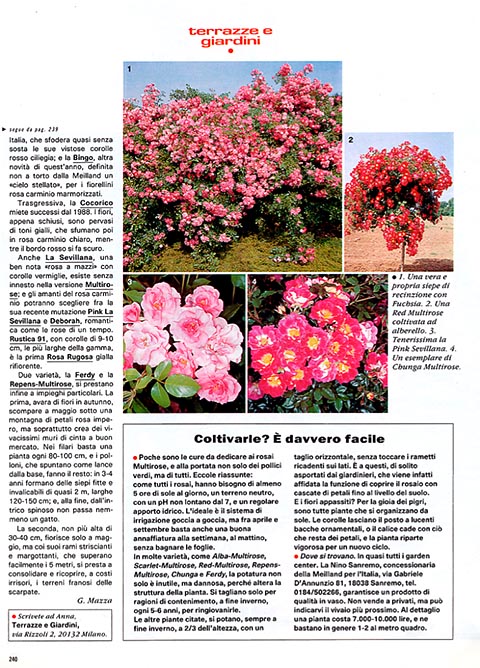 He that wants to looks nice, has to suffer a little: and he that loves to be surrounded by splendid roses, must accept several “thorns”.

War against the “powdery meldew”, and the “black spots”, with cocktails of fungicides; struggle against the insects, more and more resistant to the poisons; complex and uneasy pruning, not to cite the continuous research of the “basal shoots”, the treacherous branches of the graft carrier plants, which the beginner has difficulties to locate, and which, if not removed, transform, quickly, the rosary of our dreams in a monster with different, intrusive branches, and “surprise”, very modest, flowers. A frequent fate, without attentions, for many modern varieties, too weak to live alone, and compelled to use the foot of an unlucky, recalcitrant, “graft carrying rosary”.

In order to obviate to all these drawbacks, the Meilland, has recently selected about twenty “without problems” varieties, the Meillandecor, rechristened, for Europe, Meidiland, and in Italy, Multirose, by the Nino Sanremo, which guarantees, moreover, with this trademark, a first-choice production, solely in pot.

Plants very resistant to the diseases and the parasites, which grow up like the wild ones, on their feet, without needing any pruning, or contenting themselves, like a normal hedge, of one mechanical cut per year; landscape plants, shrubby, ramified even from the base and resistant to the frost, with flowers of small size and a modest perfume, in bud, almost incessantly, from May to December; plants covering the ground with fast growth and low costs for the public works, which, in the stretch between Bologna and Imola of the motorway A14, already occupy, just to say, 30 km of traffic islands; but also terrace plants, in large cases, and plants for competitions, which boast about thirty international awards and several gold medals. Let us see some of them, grouped, depending on the maintenance.

VARIETIES WHICH MUST NOT BE PRUNED

‘Alba-Multirose’ (Meiflopan). Propagated in 1986, it’s the “easy plant”, par excellence, as rustic as a wild rose-bush. Tall about eighty centimetres, with hanging down and creeping aspect, it widens up to one metre and a half, and astonishes for the copiousness of the small, clustery flowers, rich of 42-49 petals on 2-3 cm of diameter. As candid as the snow, they reach the maximum coverage in June-July, following one another, later on, in several cycles, until around Christmas, and few branches are sufficient for perfuming the house with unusual long lasting bouquets.

‘Scarlet-Multirose’ (Meikrotal). Commercialized from 1985, resembles, for many aspects, the ‘Alba-Multirose’, except for the corollas of 4 cm and 20 petals, of a nice red scarlet, and the plant, more vigorous, is easily taller than one metre twenty. Lazy and tardy, reaches the apex of the flowering in full summer, and, spaced with the Alba-Multirose, at a distance of 50-70 cm, creates spectacular rows where the branches of the two varieties mingle, giving the impression of an immense two coloured magic rose-bush. But, seeing that, the first one is fast growing, and the second, especially at the beginning, is rather slow, in cold climates where its vegetative period is reduced, it is better to put it in place one year before the invading neighbour.

‘Red-Multirose’ (Meineble). Diffused since 1987, has a hanging, creeping appearance, and even if widening up to one metre, does not overcome, usually, the 80 cm of height. The outcome is an harmonious and firm bush, which might be thought to be the result of patient pruning. The simple corollas, with 5-9 petals, red, with the white centre where bounces the gold yellow of the stamens; reach the 6 cm of diameter, but it mainly strikes for the richness of the flowering, almost uninterrupted, with several cycles, from May to November. Very good is the resistance to the cold, and also in winter, between the snow, it does not lack of fascination, with its small red berries.

‘Chunga’ (Morpaplay). Similar to the Red-Multirose, as per aspect and blossoming, but sold from 1985, is conspicuous for a slightly smaller flower, with a yellow centre, and an almost double number of two-coloured petals, cardinal-red on a side, and cream on the inferior one. An impressive variety, for flower-beds and low hedges in hanging down position, which, even if having the merit of blossoming with 2-3 weeks of advance, on the other roses, presents, where it is cold, the handicap of a rather slow growth.

‘Ferdy’ (Keitoli). A really unique variety, which has come out in 1984. Parsimonious of flowers in autumn, disappears in May under a mountain of corollas of three and a half centimetres, imperial pink, rich of 20-30 petals. But even if under certain environmental conditions, the growth can be slow and capricious, its main merit, besides the great rusticity, and facility of cultivation, consists in creating real and proper cheap “living boundary walls”. In the rows, a plant every 80-100 cm is sufficient, and the scions, which come out, like spades, from the base, do the rest: in 3-4 years they form thick and not surmountable hedges of almost 2 metres, wide 120-150 cm, and by the end, even a cat cannot pass through the thorny tangle.

‘Repens-Multirose’ (Meilontig). Diffused from 1985, has been recently “abandoned” by the Meilland, because the renewal of the patent was not profitable, due to the scarce sales. And then, furthermore, this variety, in bud with clusters of simple white corollas only in May, was the “black sheep”, swimming against the stream of a group under the sign of the reflourishment. But the Nino Sanremo goes on in producing it for two merits, which are unparalleled in other rose-bushes. It does not overcome the 30-40 cm of height, and with its branches, creeping and layering, which reach the six metres, is fit for consolidating and recovering, with trifling costs, the grounds subject to landslides of the escarpments. A rose, by sure, not for the garden, but precious, which, unluckily, has not been understood by the landscape architects.

In all above varieties, pruning is, not only of no use, but even dangerous, as it alters the structure of the plants.

They are to be cut only for containment reasons, or in harsh way, every 5-6 years, by the end of winter, at few centimetres from the soil, rejuvenating them, starting from zero again.

VARIETIES WITH A UNIQUE PRUNING BY THE END OF WINTER

‘Bonica 82’ (Meidomonac). Produced in 1981, is a strong variety, tall 80-150 cm, and wide even more than one metre, suitable for hedges, flowerbeds and bushy shrubs. The petals, 40-50, on corollas of 6-8 cm of diameter, are pale pink, and in June, the plant reaches the top of its splendour. Then, in August, the petals reduce to less than a half, but there is a good recovery in autumn, and they go on till around Christmas, when, in the last cycles, elegant red berries take form. It is, perhaps, the modern rose-bush which better bears the cold, if we think that it has overcome, several times and without any harm, the -35 °C of the gardens of Helsinki, in Finland.

‘Cocorico’ (Meilasso). It reaps laurels since 1988. A bush tall a little more than one metre, 60-80 cm wide, with even 20 flowers per branch, each one with a diameter of 9 cm, and 10-13 petals fluttering in a sort of French cancan. As soon as unclosed, they have a lot of yellow nuances, but then, they change colour to the pale carmine pink, with an intense red border. The plant gives the maximum by the end of May, and after a strong summer falling off, by mid autumn the number of the corollas is almost the same as in spring time.

‘Deborah’ (Meinoiral). Diffused since 1988, has mien and flowering similar to the Cocorico, but the pink-carmine corollas, with flat cup, boast a very classical look, wide 7-8 cm, with about 30 petals, blossom numerous, even 12 per branch, and the plant has shown, in several instances, an exceptional resistance to the cold.

‘La Sevillana’ (Meigekanu). Since 1978, is a typical floribunda, available either in the grafted version, or in the Multirose, without graft carrier. Even if in the first case, at the beginning, the growth is faster, the second way seems to be better, due to the absence of “basal shoots”, a grafter sturdiness of the rose-bush, with solid branches at the level of the ground, and the low costs of maintenance. In Piacenza, for instance, a flowerbed of 150 square metres, installed in 1988 in Piazza Roma, with the system of the sub-irrigation, has come, luxuriant, till our days, without any need of phyto sanitary treatments, and with only one annual cut. The maximum splendour of this bush, one metre wide, and even 150 cm tall, with stems hanging owing to the weight of the flowers, is reached in May and in October; but it is always covered of a good number of vermilion corollas of 6-8 cm, with 12-15 petals, united in bunches of 3-5 flowers, and exists from 1983 also one version with pink petals, known as Pink La Sevillana (Meigeroka). The berries, numerous and of big size, of a nice, bright, orange, complete the great ornamental value of these plants.

‘Rustica 91’ (Moryelrug). Spread in Italy since 1991, is the first reflourishing yellow rugosa. A “modern ancient rose”, reconstructed at a table, not taller than 70 cm, with 1-6 corollas per branch, of 9-10 cm each, rich of about thirty petals slightly perfumed of lemon. The blossoming reaches the apex in May and by mid autumn, with a diminution of the 40% during the summer.

‘Cherry Multirose’ (Meirumour). Just arrived in Italy, has simple, cherry red corollas, with creamy white centre, of about 7 cm of diameter. A shrub of 60-80 cm, and 70-120 cm of height, with regular and copious flowering from May to November. And also in this case, the orange-red berries are fascinating.

‘Fuchsia-Multirose’ (Meipelta). Diffused in Italy this year, with Bengal pink corollas of 4-5 cm, 15-10 petals, and even 14 flowers per branch, can overcome the 60 cm of height, widening to even two metres. And, rare instance between the roses, has an autumn flowering more abundant than the spring one.

‘Bingo’ (Meipotal). Distributed since a few months, this rose-bush of 70-80 cm, wide even more than one metre, has been compared by the Meilland to a starry sky. Actually, its carmine pink little flowers, marbled of cream-white, with white centre and old pink borders, stand out, from April to December, like many stars against the dark foliage.

Unlike the usual garden roses, the varieties of this second group must not be pruned on the sides. It is in fact to these, negligible, small branches, usually taken off, that is given the important function to cover, with cascades of flowers, till the ground level, the foot of the shrubs. The cut is therefore to be done by the end of winter, in an horizontal way, at 2/3 of the height. A further merit for the huge expanses, where the work is done with a machine.

And the withered flowers?

Apart the variety ‘White-Multirose’ (Meicoublan), which has difficulties in getting rid of them, all these plants, get organized by themselves. The corollas leave the place to bright ornamental berries, or the calyx falls down with what is left of the petals, and the plant starts again, vigorous, for a new cycle.

Easy roses: thick hedges and specks of colour without too many cares was last modified: May 24th, 2019 by Giuseppe Mazza