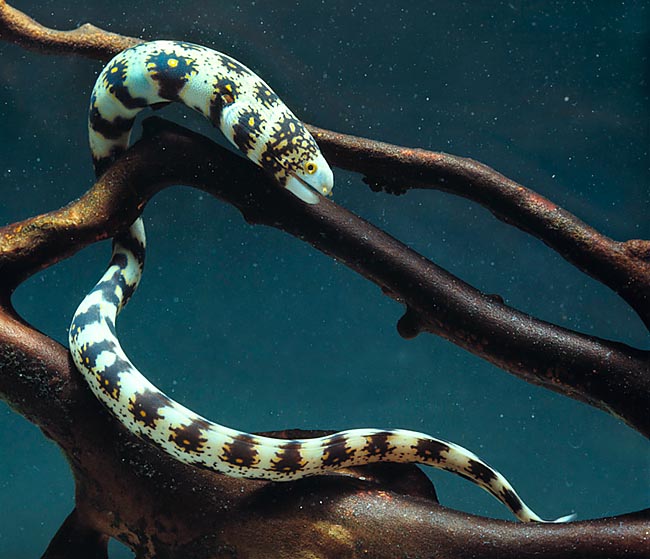 The little Snowflake moray (Echidna nebulosa  Ahl, 1789) belongs to the class of Actinopterygii, the ray-finned fishes, to the order of Anguilliformes and to the family of Muraenidae.

The name of the genus Echidna comes from the Greek “echidna” = viper, due to its viperlike look.

The name of the species nebulosa comes from the Latin “nebulosus” = misty, cloudy, due to the mimetic drawing dotted with small spots, which has earned it the vulgar name of starry moray.

It has a very vast distribution in the tropical waters of the Indian Ocean as well as in those of the Pacific Ocean, which largely overlaps with that, no less important, of the Gymnomuraena zebra.

Indicatively, we find it from South Africa and Madagascar along the whole African coast up to the Red Sea. Then, in the Arabian Sea, the Seychelles, the Maldives, in India, in Sri Lanka, the Andaman Islands, in Indonesia, Australia and New Guinea. Northwards, in the Pacific, it has colonized the Philippines, Taiwan and the southern part of Japan. Southwards, it reaches Lord Howe Island; eastwards, after the Hawaii, it even reaches the American continent. We find it, in fact, along the coasts of Mexico, in Costa Rica, in Panama and in northern Colombia. 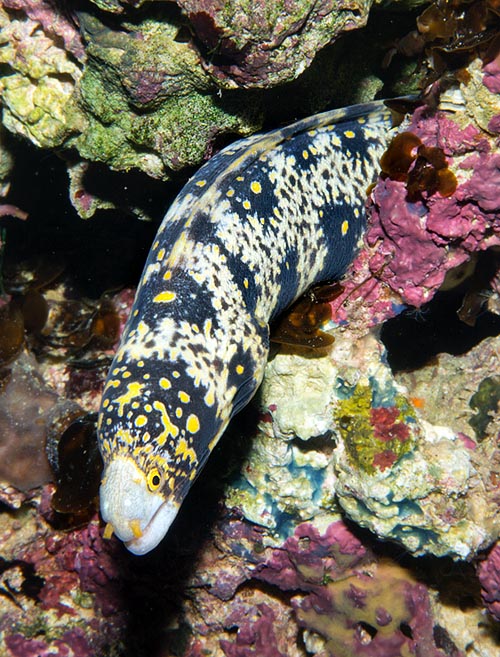 It looks at the world from home entrance, hiding at first danger © Giuseppe Mazza

It lives hidden among the madrepores and the crevices of the rocks; usually in the first 10 m of water, but it has been sighted also on the outer side of the reefs up to about 50 m of depth.

Completely harmless for the humans, it does not exceed the metre, as usually measures 50-70 cm.

The body, decidedly serpentiform, scaleless, is protected by slippery mucus which allows it to get into holes almost invisible.

The branchial orifices are reduced to two simple holes.

Though, unlike other morays, it is active also during the day, its eyesight is modest, compensated by a perfect sense of smell, thanks to two anterior nostrils and two posterior ones shaped like a small tube. The first point downwards, at the extremity of the snout, and the second ones upwards, at the level of the eye. This is a sort of all-round radar for hunting also in the moonlight.

The snout is rounded. The mouth, decidedly big if compared to the head, shows jaws with sharp teeth for seizing the crustaceans it eats, followed by a molariform structure for crushing the carapaces. Other small teeth are present on the vomer.

The background is white with a thin blackish reticulum.

On this, along the sides, stand out two rows of black bands with more or less expanded yellow dottings. The lower one, longer, goes down up to the belly, whilst the upper one interests the back. 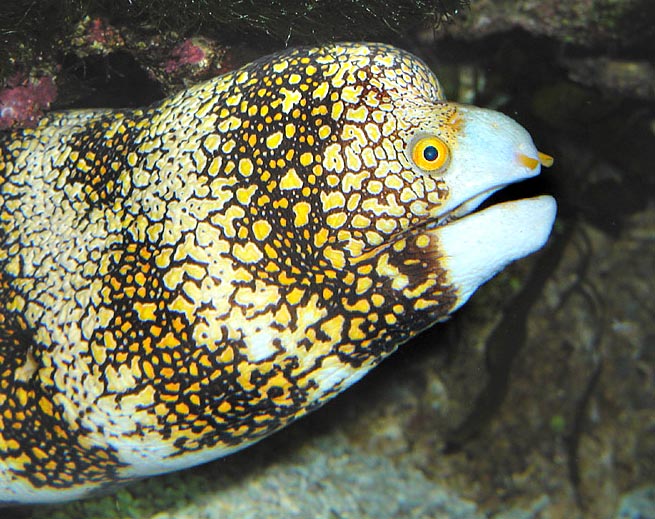 Both can join, up or down where the cutaneous ply acting as fin is absent, and also this has some spots continuing the tune.

Like all morays, also the Echidna nebulosa has its small den. Usually it keeps on the house entrance smelling the world, ready to get inside if a predator approaches, but being sure of its mimetic fabric it goes hunting also during the day.

When in a water pool and the ebb tide comes, it does not hesitate, even under the sun, to get out on the dry land for joining again the sea or for passing in another pool.

It goes looking for small crustaceans and the small trapped fishes that have no way out.

It seems that it is a hermaphrodite protogynous species, which means with females that may transform in males when a certain size is reached.

It can live solitary, in small schools or in pair. Little is known about the reproductive modalities even if for the spawning they have sighted pairs swimming embraced in the surface. What is sure is that the eggs are pelagic and that the larvae, called leptocephali, are transparent, shaped like a leaf of willow, with very small head. 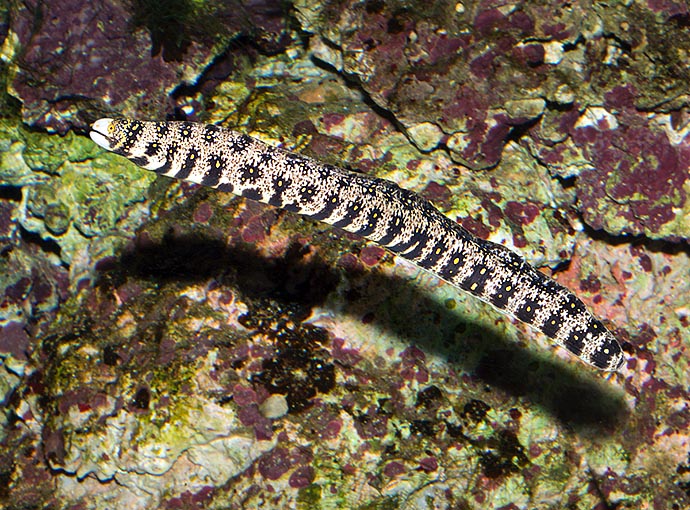 This is a character evoking primitivity in the world of the fishes.

When in suitable aquaria, it is a calm and little aggressive species which may live long.

But it holds the records of escapes and if the cover is not well shut, it may get away during the night and then it can be found dead, the following morning, on the floor.

The growth of the snowflake moray is slow, with a relatively high vulnerability index of 57 on a scale of 100.