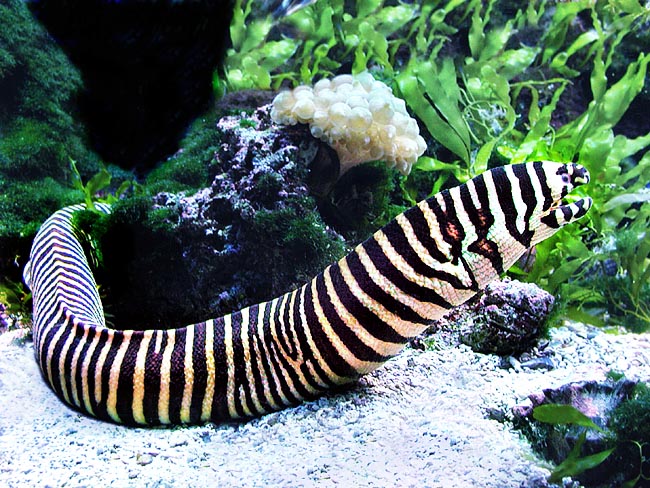 The Zebra moray (Gymnomuraena zebra Shaw, 1797) belongs to the class of the Actinopterygii, the ray-finned fishes, to the order of Anguilliformes and to the family of Muraenidae.

The name of the genus Gymnomuraena comes from the Greek “gymnos” = naked and from the Latin “muraena” the name given by the Romans to the morays. It is therefore, literally, a naked moray, just to emphasize the fact that it is a fish without scales.

The name of the species zebra evokes the zebralike livery of the animal.

It has a very vast distribution in the tropical waters of the Indo-Pacific.

Indicatively, we find it from South Africa and Madagascar up to the Red Sea and the Arabian Sea, the Seychelles, the Maldives, in India, in Sri Lanka, the Andaman Islands, Indonesia, Australia, and New Guinea. Northwards, in the Pacific, it has colonized the Philippines, Taiwan and the southern part of Japan. Southwards, it stops at the Australian Great Barrier Reef, but eastwards, after the Galapagos and the Hawaii, it even reaches the American continent. In fact, we find it in Mexico, Guatemala and Colombia.

It lives hidden amongst the madrepores, in shallow waters, but also on the outer side of the reefs, up to 50 m of depth. 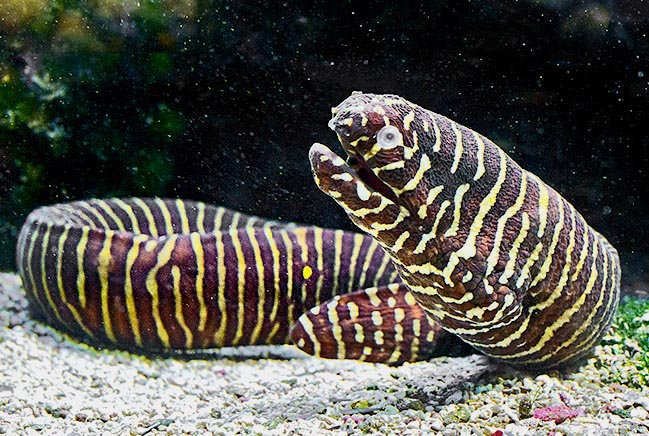 It doesn't exceed the 150 cm and has more than 100 clear rings, partly open © Giuseppe Mazza

As customary among the morays, the pectoral fins and the ventral one are absent. The serpentiform body, scaleless, is protected by slippery mucus which allows it to slip without any damage into every crevice. The branchial orifices are reduced to two simple holes. The eyesight is very poor but the sense of smell is perfect, with so much of anterior and posterior nostrils shaped like a small tube. The first ones point downwards and the second up, at the level of the eye. This is a sort of radar, much better then the eyes, for hunting in the darkness.

The snout is rounded. The tail has some bony plates under the skin. The mouth, with an enormous opening like all morays, has teeth almost hidden by the gums, formed by a sort of molariform cobblestone done in way to crush the cuirasses of animals unable to run away. Therefore, daggers and hooks are not necessary for catching and holding the preys.

On the chocolate-reddish background colour stand out more than 100 cream white vertical bands. They mostly form complete rings, but in the 30-40% of the cases these appear broken for a best mimetic effect. 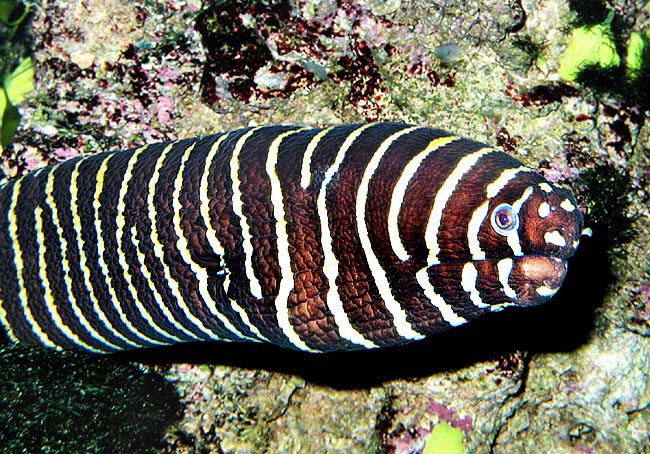 With darkness, the Gymnomuraena zebra goes out from its shelter and moves looking for molluscs and crustaceans to munch, with a preference for the crabs having rich in pulp claws belonging to the genus Etisus, not to talk of the possible sea urchins, not too spiny and full of eggs, such as the Echinometra mathaei.

It seems, but this is still to be proved, that this is a hermaphrodite protogynous species, that is with females which may transform in males once a certain size is reached.

It can live isolated, in small schools or in pair.

Little is known about the reproductive modalities even if for the spawning pairs have been seen while swimming embraced in surface.

What is sure is that the eggs are pelagic and that the larvae, called leptocephali, are transparent, shaped like a leaf of willow, with very small head. This is a character evoking primitivity in the world of the fishes. In suitable aquaria it is a calm species and little aggressive which may live long. But it holds the record of escapes and if the cover is not well closed, it can get out during the night and then it is found, the following morning, dead on the floor.

The growth of the zebra moray is slow, but with a relatively high vulnerability index of 74 on a scale of 100.