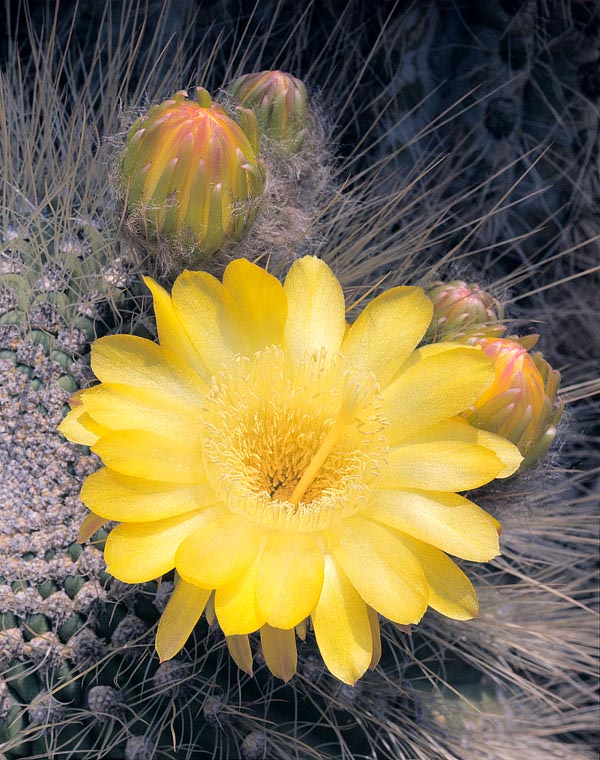 Echinopsis formosa grows in Chili and Argentina, up to 3500 m of altitude, on the sunny rocky slopes of the Andes. Solitary, then cespitose and finally columnar even 2 m tall and with 50 cm stems. The day imbutiform flowers, golden yellow, reach 8 cm. It resists -10 °C but not roots rottenness © G. Mazza

The Echinopsis formosa (Pfeiff.) Jacobi ex Salm-Dyck (1849) is native to western Argentina and Chile, where it usually grows in the valleys and along the rocky slopes of the Andes range up to about 3500 m of altitude.

The name of the genus is the combination of the Greek words “echinos” = hedgehog, and “opsis” = look, with obvious signification; the name of the species is the Latin word “formosa” = beautiful.

Initially solitary succulent, more or less cespitose later, globose, it tends, with the time, to become columnar, usually up to a height of 0,5-1 m with a diameter of 20-35 cm, even if old specimens, in the wild, can reach the 2 m of height and 50 cm of diameter.

The stems have 15-35 vertical pale green ribs, with remarkable tubercles and elliptic areolas, initially covered by a brown down, spaced of about 1 cm; the areolas are provided of 8-16 radial thorns, 3-10 cm long, yellowish, and 4-9 central thorns, brown, of variable length which, in some cases, can reach the 20 cm. The funnel-shaped flowers, diurnal, originate in the apical zone and have a gold yellow colour, are about 8 cm long and broad.

The fruits are globose, 3-4 cm of diameter, covered by scales and down; the pulp is white, edible, and contains several black seeds. It usually reproduces by seed.

Slow growing plant to be cultivated in full sun, or, however, at the maximum possible luminosity, on particularly draining soils which can be formed for about the 50% by common manure garden earth and for the rest, in equal part, by coarse siliceous sand and crushed stones.

It has a high resistance to the dry cold, as it can resist, for short time, to -10 °C, but not to the wet cold which can cause rottenness, even if, under this point of view, it is more resistant than other cacti. Its optimal collocation, in open spaces, where the climate allows it, is in the “desert” gardens, together with other xerophytes, elsewhere it is to be cultivated in pot, with the same modalities shown before.

Therefore, in the climates characterized by humid winters it is to be sheltered and kept dry with temperatures possibly between 0 and 5 °C, this period of cold and dry rest is useful for stimulating the blossoming; in summer it is to be regularly watered, but allowing the mould to dry up completely before giving water again.

Echinopsis formosa was last modified: May 7th, 2018 by Giuseppe Mazza